No dedicated remote button on the mode. 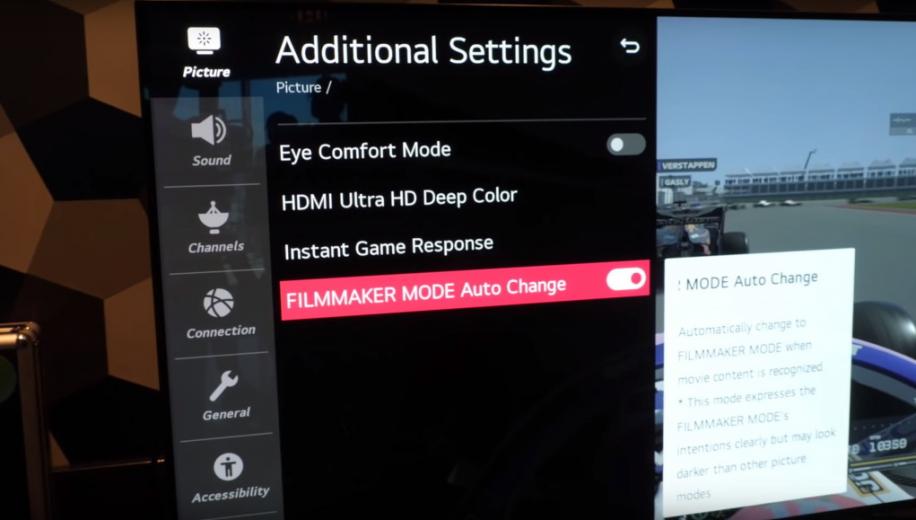 Filmmaker Mode was one of the hot topics in TV circles at this year’s CES with support confirmed by a number of major TV manufacturers including LG, Samsung, Vizio and Panasonic as they unveiled their newest TV models. While the experience should be identical regardless of which manufacturer’s TV you’re watching on (that’s the whole point), how each company implements it is another matter.

Filmmaker Mode is essentially a picture setting that removes a lot of the image processing, such as noise reduction and motion smoothing, that can be applied to content, often without the viewer ever really being aware that there is anything extra being done to the picture. Hollywood creatives have long argued that adding this layer of processing by the TV undermines their creative intent to the point where the storytelling is not necessarily being successfully conveyed.

Video: What is Filmmaker Mode?

Each TV manufacturer who is supporting this new picture setting can choose whether to activate Filmmaker Mode for appropriate content via a button on the remote control or via autoselection (or both).

We took the opportunity to speak to LG at CES 2020 and the TV giant explained to us what its particular approach has been in order to provide this new experience for viewers on its latest OLED and NanoCells TVs.

The first thing to clear up is that there will be no activation of Filmmaker Mode on LG TVs using a button on the TV’s remote control. Instead, LG will be supporting the automatic triggering of Filmmaker Mode alongside traditional menu access, so that if you do not want the notification to come up each and every time, autosensing can be turned off and Filmmaker Mode accessed solely via the menu in future.

Neil Robinson, Senior Director Strategic Tech Projects, LG explained that auto-switching can be initiated via an HDMI signal in the case of a movie on a disc or via a streaming partner who adds the instruction to its content using an API supplied by LG so that their application can automatically switch the TV into Filmmaker Mode.

Given LG’s partnerships with Hollywood and its recent recognition in the area of Engineering Excellence at the 2019 HPA Awards, the company wants to drive awareness of Filmmaker Mode, and also its other picture settings that are there to preserve the original creative intent, which is why they felt that auto-switching was the preferred way to go as it would encourage viewers to at least give it a go.
However, Robinson was keen to point out that the choice of using the mode is entirely with the viewer, explaining, “You can select ‘Yes I’d like to see it’ if you receive a pop-up and then later change your mind if you don’t like it. Or, if you never receive a pop-up for whatever reason, then you can manually select it too.”

He also went onto describe accuracy differences between Filmmaker Mode and picture settings that more confident viewers might already be using. For example, SDR content is created up to 100 nits, yet the ISF Dark Mode picture setting is brighter than this and, as such, presents SDR content above its 100 nit peak, technically deviating from creative intent. Viewers are therefore becoming used to seeing SDR content brighter than it was intended to be viewed at, which would not be the case with Filmmaker Mode.

Some TV makers have augmented Filmmaker Mode by the use of their panel’s ambient light sensing capabilities, for example, Panasonic’s new HZ2000 has a feature called Intelligent Sensing which dynamically adjusts the picture according to ambient lighting conditions in the room. LG, however, feels this is not necessary.

Neil Robinson explained, “We’re not doing that for this year. The main reason for that is we already have picture modes which preserve the creative intent and have ambient light adaptation, such as our Cinema Home Mode in HDR10.” He went on to add, “All of the picture modes in SDR can be set to do ambient light adaptation as well. So if you wanted a brighter version of Filmmaker Mode then the Cinema Mode would be the one that you would select.”

What do you think about LG’s approach to implementing Filmmaker Mode? Would you prefer a button on the remote or would you just forget to use it without an automated prompt? Do you even think Filmmaker Mode is something you’d want to use? Why not start a conversation in the discussion thread?