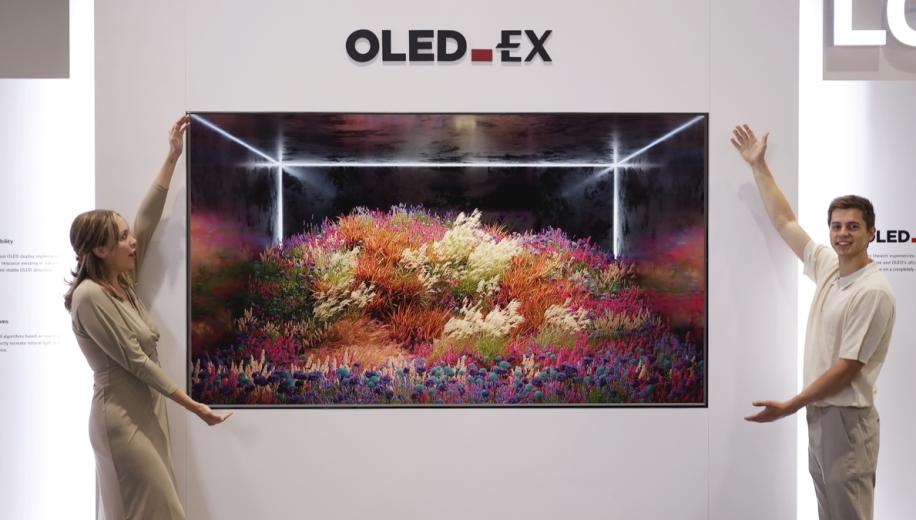 LG Display has offered up a first look at its 97-inch OLED.EX TV screen, along with its new Bendable and Foldable panels, at the Society for Information Display (SID 2022) event in California.

As part of a general showcase for its new technologies, the 97-inch OLED.EX TV panel is arguably the star of the show. These EX displays use deuterium, a more stable and heat- and electricity-resistant form of hydrogen that is apparently six times better than the standard elements used in previous OLED TV panels, meaning it can ‘burn’ brighter and for longer – which is why LG Display can boast of a 30% increase in brightness and more realistic detail and colours in its OLED.EX TV displays.

The 97-inch model is the largest of its kind, making it very hard to miss during the showcase event, although an additional benefit of the streamlined EX technology is a 30% reduction in bezel thickness. There still isn’t a great deal of information on the specifics of the panel itself, or when it's likely to be made available, although postings on the LG Display website does suggest a Q2 starting window – which we’re now in – while it also hints towards being limited to a couple of its production plants (in South Korea and China) so just how widespread any initial rollout will be remains to be seen.

Also on show at the event in San Jose was LG Display’s 42-inch Bendable OLED Gaming screen that has a curvature range of 1000R, or a radius of up to 1,000mm, enabling the user to bend or straighten the display to give optimum immersion in the gaming experience. There was also an 8-inch 360-degreee Foldable OLED that can be folded inward and outward more than 200,000 times without compromising on the screen’s performance, plus a 17-inch Foldable OLED laptop.

There was also the company’s latest touch-screen tech, with OLED in-Touch and its Transparent variant showing new interaction options for OLED panels, plus its new 34-inch P-OLED display with an 800R curvature, and a 55-inch Transparent OLED Shelf lifestyle display for putting those rather more still images in the spotlight.

Although it might be more of a showcase than a detailed presentation of what’s coming up, the event is still certainly eye-catching – not least with that 97-inch OLED.EX filling a wall. So is this new tech something to be excited about, or is it a case of waiting until it proves itself in an actual home cinema set-up?