It's all about the Artificial intelligence and intelligent processing 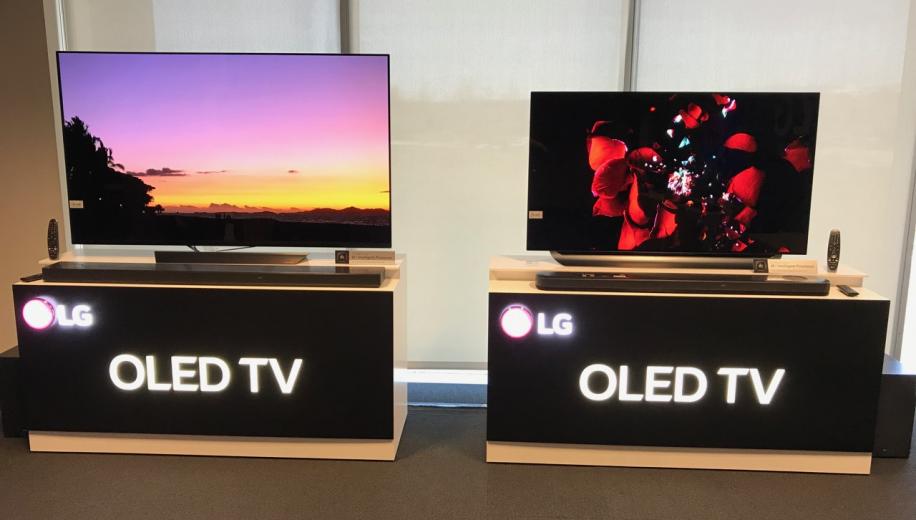 LG held a technical demonstration for their new TV line-up in Madrid this week.

It was the first big TV event to be held at their European headquarters, although previously they have held smaller events with European and US journalists such as the one in San Francisco last year. However this was their first European wide event aimed at presenting the 2018 TV line-up and demonstrating their latest features.

The premium TV market has been growing steadily over recent years and LG has gained a degree of dominance over the last two years. And although people are watching more content on smaller devices, they always migrate back to larger screens eventually. Video-on-demand is also growing in importance and design has become more of a deciding factor when people are choosing a new TV. All these factors have been taken into account when LG developed their new TVs for 2018 and although they announced the line-up before CES, the Madrid event provided a chance to get a closer look at some of these new models. LG also took the opportunity to demonstrate the latest features found on their new Alpha9 processor.

At the event LG had the C8, E8 and W8 on show and these models, along with the G8, all use the Alpha9 Intelligent Processor. However the B8 will use the Alpha 7 processor, which LG is also using on their SUPER UHD LCD TVs. The first demonstration took place in a blacked out room, where LG had 65-inch versions of the E7 and E8, along side a 65-inch Sony A1. The Alpha9 processor, is faster and more powerful than the Alpha 7. It adds Quad Step Noise Reduction, with the first two steps reducing spatial and temporal noise and the second two steps de-contouring the image. This de-contouring feature can be activated by selecting the Low setting in the MPEG Noise Reduction sub-menu. LG demonstrated both the improved noise reduction and the de-contouring at the event and the E8 was clearly better in both areas when compared to both the E7 and the A1.


The Alpha9 also has a frequency based enhancer designed to improve perceived sharpness, along with an object-based depth enhancer that improves brightness and contrast to create a better perception of depth. Once again this feature looked impressive on the E8, with the backgrounds on the A1 looking blurred in comparison. However it did take a few seconds to lock on to the signal, each time the demo restarted. Finally, in Vivid mode, there is also an adaptive colour enhancer that analyses and enhances the colours, creating a more saturated image. This demo clearly showed that the colours were more saturated on the E8. If you like your images to be accurate then this probably isn’t a feature for you but since it’s only available in the Vivid mode that shouldn’t be an issue. Thanks to the Alpha9 processor the onscreen display (OSD) is also sharper and more defined in 4K, creating a seamless experience when navigating onscreen content.

The motion handling of the Alpha9 has also been improved, resulting in less judder with 24, 25 and 30Hz content. LG demonstrated the improved motion handling on the E8 but strangely they failed to show the new MotionPro black frame insertion feature which has also been added this year. This feature will result in better motion handling but users should be aware that the image does darken and some people might experience flicker. The Alpha9 can also handle High Frame Rate (HFR) at either 100 or 120Hz depending on the region and once again LG demonstrated the potential of HFR – especially where sport is concerned. The colour accuracy of LG’s latest OLED TVs has also been improved. They now use a colour table that is seven times more accurate than their previous models. The addition of True Colour Accuracy Pro increases the look-up tables (LUTs) from 17 x 17 x 17 (4,193 points) to 33 x 33 x 33 (35,937 points). In addition when shipping their 2018 TVs, LG are calibrating the Cinema/ISF/Technicolor modes in the factory with the intention of targeting colour DeltaE errors of only one, which is well below the visible threshold of three.

LG support almost every version of High Dynamic Range (HDR) including Dolby Vision, Advanced HDR by Technicolor, HDR10 and Hybrid Log-Gamma (HLG). In fact the only version of HDR that LG don’t currently support is HDR10+ but they do offer dynamic tone mapping for both HDR10 and HLG that they feel can offer an experience that is just as good. LG demonstrated the potential of this feature using the ‘Arriving in Neverland’ scene from Pan, which was mastered at 4,000nits, and the sun was clearly defined. As a result the overall HDR10 image on the E8 was superior to both the E7 and the A1. The Alpha9 processor is used in all of LG’s 2018 OLED TVs except the B8, which uses the Alpha7 processor that is also included on their SUPER UHD range. The Alpha7 is similar to last year’s processor but does add some new features such as black frame insertion and auto-calibration.

This major new feature for 2018 allows CalMAN to control an LG TV at a hardware level, rather than via the user interface calibration controls, resulting in an incredible level of accuracy. Whilst auto-calibration is included on both the OLED and SUPER UHD ranges, the TVs that use the Alpha7 processor are limited to 17 x 17 x 17 LUTs, whilst those that use the Alpha9 use the full 33 x 33 x 33 LUTs. However the feature will allow all the supporting TVs to quickly and easily create accurate Cinema, ISF, Technicolor, HDR, Dolby Vision and Game modes.

On the audio side of things, all of LG’s OLED TVs and their SUPER UHD models will offer support for Dolby Atmos, thus allowing the TVs to take advantage of this object-based soundtrack and provide a more immersive experience. The OLED range also uses what LG are referring to as their 'Unitas' design which is intended to combine unity, harmony and balance. New for this year on all of LG's OLED and SUPER UHD TVs is ThinQ AI, which is a proprietary artificial intelligence technology that LG has added to WebOS this year. It includes compatibility with Google Home and Amazon Echo AI speakers, as well as expanding the existing voice control that already exists within LG’s TVs. As a result it is easier to access the TV menus, search for information and pair with Google Home and Amazon Echo. To help consumers when voice controlling their TV, there are simple guidelines built in that they can access using the Voice button on the remote.

The “Gallery” feature has been expanded and is available on both the OLED and SUPER UHD models. It now has 46 pictures with four downloadable themes, as well as two video clips, although these are only available on the OLED TVs. WebOS has also had a few tweaks and LG have added Sound Mode and Network as options to the quick menu that appears down the right hand side of the screen. The side menu also shows the current value of each category and there is a short cut function that can be engaged via a long press of the button. LG have also made some minor improvements to their Content Store, added a search function to the Home page and improved the User Guide. As already mentioned, this year’s SUPER UHD range uses the Alpha7 processor and includes Dolby Atmos and WebOS with ThinQ AI. These new LCD models are Nano Cell displays which use a nano material that is smaller than quantum dot and is applied directly to the LCD panel, rather than through a filter, resulting in purer colours. Along with this improved colour reproduction, LG’s SUPER UHD TVs also use an IPS panel for superior viewing angles compared to VA panels.

LG demonstrated the new black frame insertion feature on an SK9500 that was positioned next to last year's SJ9500. The motion was clearly better on the SK9500 and, thanks to the use of a direct backlight array, it was also brighter than the SJ9500. LG also demonstrated how the use of a direct array backlight eliminates the columns of light that affect edge-lit TVs like the SJ9500.

This year there are three SUPER UHD models with the SK9500 and SK8500 both using a full array local dimming backlight. This results in black levels that are 2.5 times better than an edge-lit TV and lighting control that has been improved by 16 times, whilst reflectivity has been reduced by 44% compared to a conventional LCD TV.

LG also had their latest soundbars on display, although unfortunately we didn't get a chance to hear them in action. However they certainly looked very nice, with a black brushed metal finish and what appeared to be an excellent level of build quality. There was the SK8 soundbar which includes a wireless subwoofer and support for Dolby Atmos, Hi-Res Audio and Chromecast. LG also had the larger SK9Y on show which also has a wireless subwoofer and supports Dolby Atmos, Hi-Res Audio and Chromecast. Finally the flagship soundbar for 2018 is the SK10Y which has been designed for screen sizes of 65-inches and larger. This model includes the same features as the previous two but adds technology by Meridian as part of a new partnership between LG and the UK audio company.