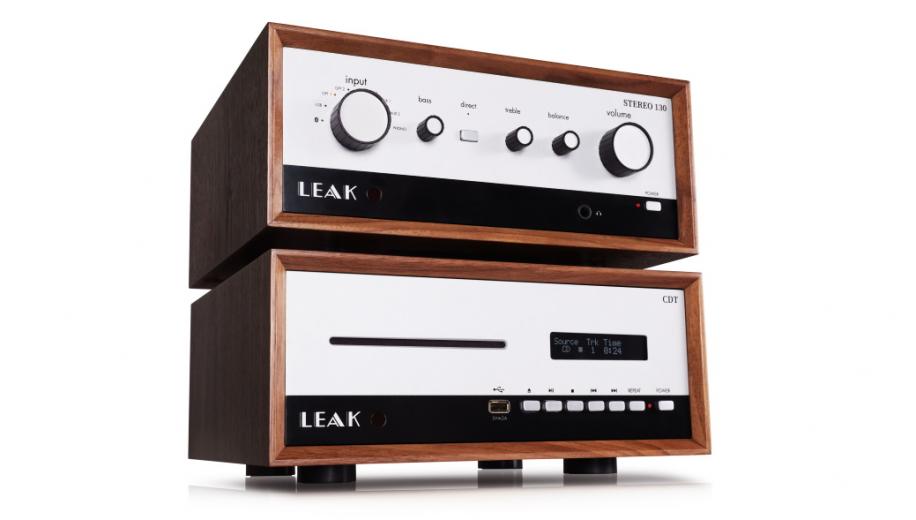 Back from the mists of time, LEAK the renowned British Hi-Fi manufacturer returns with its first products since the mid seventies: the Stereo 130 integrated amplifier and CDT CD transport.

Clearly if you plan on resurrecting a name synonymous with technology from another era, you want that name to deliver a certain level of expectation. In the case of LEAK that means a certain retro design preconception along with classic analogue engineering. Of course, here we are 40 years on from the company’s last product so the advances of the last few decades means there’s cutting edge digital technology present too.

The first product out of the gate is the Stereo 130 integrated amp which is a descendant of the very first commercially available all-transistor amplifier from 1963, the Stereo 30, which was instrumental in paving the way for future solid-state amps.

The Stereo 130 recreates the classic Hi-Fi look with an optional real wood enclosure and a tactile front panel. Behind the scenes though, the latest techniques and technologies bring this classic transistor amp design bang up to date.

At its core is a Class AB power amp with a 200VA toroidal transformer that draws on decades of amplifier design experience.

Feeding the amplifier, are a raft of inputs including a low-noise, JFET-based MM phono stage for vinyl fans as well as analogue line-level inputs plus optical, coaxial and asynchronous USB digital connections for external CD players, computers, network streamers, TVs and more. Hi-Res PCM (up to 32-bit/384kHz) and DSD (up to 11.2MHz/DSD256) files are supported.

Digital-to-analogue conversion is handled by an ES9018K2M Sabre32 Reference DAC chip which is complemented by specially devised circuitry, including op-amps selected for their synergy with the ES9018. Independent power supplies feed all critical stages of the Stereo 130’s digital and analogue circuits and this, along with the careful layout, supports the extraction of maximum detail and expression from every input source.

As well as audio sources that connect directly, the Stereo 130 can also stream music from a phone, tablet or music player over aptX Bluetooth.

The character of the sound can be adjusted via the treble and bass controls on the front panel but these tone controls can also be bypassed to provide the shortest possible signal path to the analogue volume stage, which is controlled by a motorised ALPS potentiometer.

For those wanting late night or private listening sessions, there’s a dedicated headphone amp stage with current-feedback circuitry, and the gain bandwidth and high slew rate make it suitable for all manner of headphone variants.

The degree of adaptability of the Stereo 130 integrated amplifier makes it compatible with many contemporary loudspeakers but if you want a nod to the retro stylings that the 130 sports then LEAK’s sister company, Wharfedale, has some 60s inspired designs.

Designed to match the look of the Stereo 130 amplifier ‘hub’, the LEAK CDT CD transport provides a compact disc playing partner for those who still like to return to their hard copy disc libraries.

Bringing in technology from another sister company, the CDT uses the same slot-loading mechanism found on Audiolabs’ acclaimed CD players and is thus able to play scratched or damaged discs using a read-ahead digital buffer to reduce read failures.

The transport mechanism has its own power supply and sits within a magnetically shielded enclosure which all helps with clean, precise digital signal extraction.

A temperature-compensated crystal oscillator controls the master clock which enables digital output from both coaxial and optical sockets to exhibit extremely low levels of jitter. Moreover, the coaxial output is fed from a differential line driver to ensure a ‘flawless digital signal’ reaches the accompanying DAC.

An additional USB input on the CDT’s front panel means the device is more than just a CD player and WAV, AAC, WMA and MP3 playback from USB drives is possible with compatibility for FAT 16 and FAT 32 formatted storage. File navigation is easy using the front panel controls and remote handset.

The LEAK Stereo 130 is available with or without a real-wood walnut enclosure, at an RRP of £799 and £699 respectively, while the LEAK CDT is priced at £549 with and £449 without its optional wood enclosure. Both are available from August.

Are you tempted by the classic Hi-Fi era chic of LEAK’s newly launched Stereo 130 amplifier and CDT CD transport. Why not let others know what you think of this news.