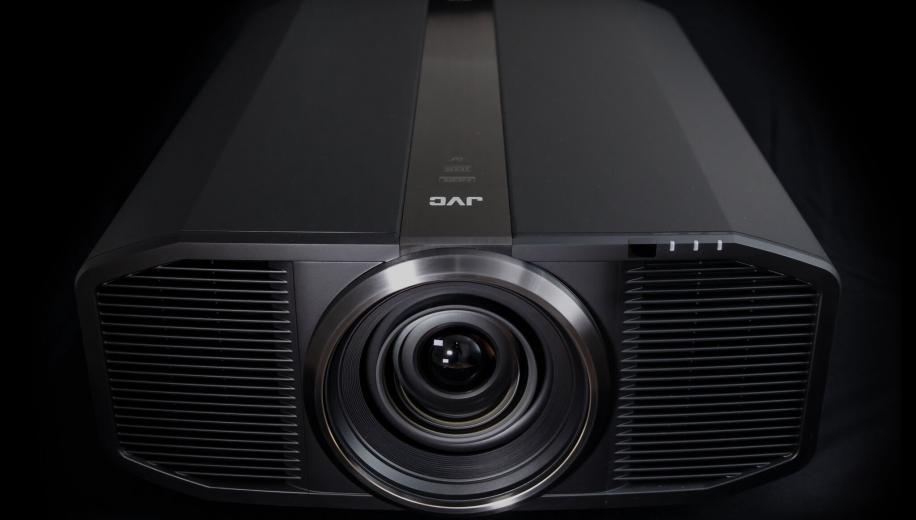 This new projector will be available in Europe from late November and includes the 'Blu-Escent' Laser light source realising a brightness of 3000 lumens with dynamic light source control, which is unique for Laser. Added to this is a new lens dedicated for 4K resolutions and new wider colour gamut (WCG) filter and over 20,000 hours operational life.

The DLA-Z1 also boasts the worlds smallest native 4K DILA device that narrows the pixel gap by 31% against former items with a resolution of true 4K at 4096 x 2160 pixels from the three 0.69inch for red, green and blue. The light source is, of course, the 'Blu-Escent' which is a blue laser diode with 20,000 operational hours and a claimed 3,000 lumens brightness. This will help produce more realistic peak brightness for HDR content and also larger screen sizes. The laser can control output according to the scenes brightness and contrast using the Dynamic Light Source Control. JVC claim they can reach a contrast ratio of infinity with this technology. Big claims indeed.

JVC are also claiming that the DLA-Z1 can reach 100% of DCI-P3 due to the use of a laser light source and the new Cinema Filter, which should also see the projector hit 80% of BT.2020. This should significantly improve UHD playback of HDR content and content mastered in the DCI-P3 colour space. HDR content like UHD Blu-ray with 10bit gradation, Rec.2020 colour space and HDR10 grading can benefit greatly from being displayed on the DLA-Z1 with its wide coverage, brightness and WCG.

Finally, the new 16 group 18 sheet glass lens and full aluminum lens barrel has been developed just for this projector. The diameter of the lens is 100mm, compared to the conventional 65mm, in order to project the 4K resolution to the screen in focus and to keep a wide shift range of 100% vertical and 43% horizontal. In addition, adopting five anomalous dispersion lenses in accordance to the different refractive index of RGB light, the chromatic aberration and colour fringing, when shifted, can be minimised, resulting in precise projection of 4K resolution graphics. To house all this new technology is a new design with a high standard of build quality and materials used. This includes a hairline aluminum centre which accents against a matt black body. This black finish is perfect for serious home cinemas. Not only that, the rear intake and front exhaust can flexibly adapt to the various installation environments making sure it remains at optimum operating temperature.

JVC are releasing this model as a high-end flagship with the intention that it provides exactly what the end user wants from the new 4K Ultra HD sources and content, providing the best in connectivity and future standard changes. It will also be the world's first projector to be a THX certified 4K Display.

The DLA-Z1 adopts JVC’s original blur reduction technology "Clear Motion Drive" which is compatible to 4K60P (4:4:4) and "Motion Enhance" which minimises the motion blur significantly by optimizing the drive of the D-ILA devices. The combination of these two technologies results in smooth and detailed image for a variety of images.

It will be compatible with “Auto Calibration Function”, which can calibrate the various pictures under various environments automatically, optimizing the picture accordingly to the viewing environment.

There are additional new screen compatibility for “Screen Adjust Mode", which optimizes the colour differences caused by different screen materials.

The DLA-Z1 is also equipped with a “Low Latency Mode” which decrease the input lag from the source. Perfect for gamers. Ten Installation modes are created for collective management of the settings like Lens Memory, Pixel Adjust, Screen Mask, which may be adjusted depending on the installation.

The latest HDMI/HDCP2.2 standard incorporated for both HDMI inputs. These latest HDMI inputs are capable of handling data transfer rate up to 18Gbps.

We are getting a full in-depth demonstration of the DLA-Z1 at IFA and will publish a first look article in due course. It promises to be an outstanding projector, and we still have no idea of the actual pricing, but it will be expensive.
To comment on what you've read here, click the Discussion tab and post a reply.
News Specs Discussion (64)