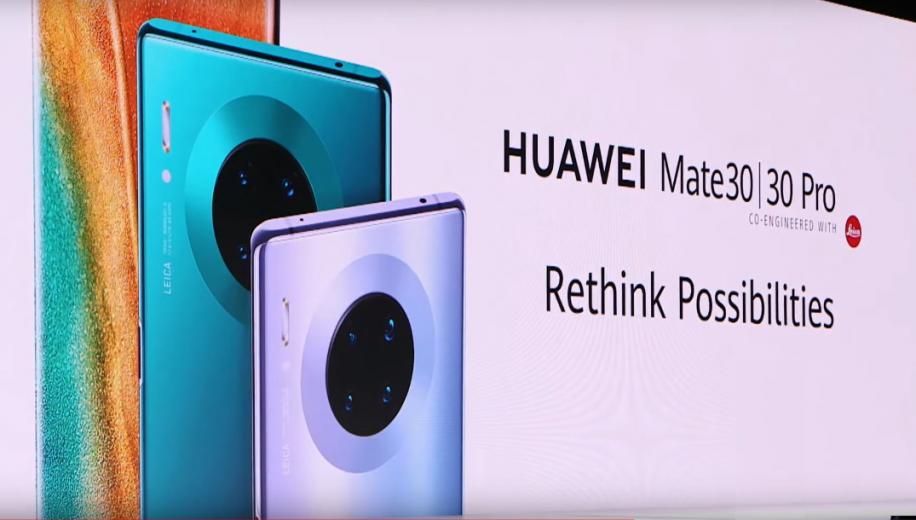 Huawei isn't about to let the US government, challenging trading conditions and the fact that its P30 Pro flagship is only 6 months old stop it from unveiling another duo of top flight smart phones to consumers - the Mate 30 and Mate 30 Pro.

However, the first thing to note about these latest phones is that they will not be running Android and neither will they feature many of the most popular Google apps such as YouTube, Gmail, and Google Maps that Android users normally take for granted will be pre-installed on their phones.

The ongoing trade dispute between the US and China coupled with security concerns over Huawei meant that most industry watchers expected this and Huawei has spent the last few months bringing its HarmonyOS to the fore - something it will now rely on until the current situation is resolved.

With Google Play Store not available on the Mate 30 and Mate 30 Pro, users will have to wait until popular apps like Facebook, Instagram and WhatsApp appear on Huawei’s own App Gallery and Huawei has preloaded its own versions of a variety of apps that consumers expect to be available at purchase. Indeed, knowing the challenge ahead, Huawei has invested $1 billion in their open Huawei Mobile Services (HMS) Ecosystem Incentive Program to encourage developers to make their apps compatible with HarmonyOS and according to the company, 45,000 apps have been integrated into the HMS core.

In order to offset the lack of Google services in the Mate 30 and Mate 30 Pro, Huawei has concentrated on making the hardware in the phones as appealing as possible.

One of the most noticeable elements of the new handsets is the design of the camera matrix on the rear. Gone is last year’s square look as is the vertical strip on the P30 and P30 Pro, and in comes a circular housing designated the Exquisite Halo Ring Design, inspired by the classic look of camera lenses from days gone by.

For added comfort, the handsets feature more streamlined corners and the Mate 30 Pro features the new Horizon display whereby the screen rolls off the sides of the handset to nearly a full 90° over the side, creating an edgeless display.

Supporting the elegant and sleek design is Huawei's Acoustic Technology which dispenses with the ear-piece. There’s also no hardware volume button, instead, a double-tap brings up an on-screen slider for either right handed or left handed users. The same technique can also be used to take selfies.

Both phones are water and dustproof, the Mate 30 Pro is rated at IP68, while the Mate 30 manages IP53.

Colours include Black, Space Silver, Cosmic Purple and Emerald Green. Emerald Green uses new materials technology to create a gradient between matte to glossy finishes which creates an anti-slip grip and manages to keep fingerprints to a minimum too.

There are also two Vegan Leather options which retain their reIevant water and dustproof rating and come in Orange or Forest Green.

The Mate 30 actually has the larger screen of the two phones, featuring a 6.62-inch rigid OLED display with a resolution of 2340 x 1080 in a 19.5:9 ratio. The Mate 30 Pro has a 6.53-inch Flex OLED screen with a resolution of 2400 x 1176 which reflects the 18.4:9 aspect ratio. Both screens support the DCI-P3 colour gamut and High Dynamic Range (HDR) and both produce lower levels of the more harmful blue light wavelengths than previously.

There’s a front notch which is smaller than before and manages to pack in a Gesture sensor, 3D depth camera, Ambient Light sensor, Proximity sensor and selfie camera.

Despite larger batteries than ever, the weight of each handset remains under 200g. The Mate 30 has a 4200mAh battery while the Mate 30 Pro boasts a 4500mAh pack and both phones support wired and wireless Fast Charging at 40W and 27W respectively. Reverse charging of other devices increases to 3x faster than previously too.


Main Camera
The Mate 30 features a Leica Supersensing camera array which has the following:

The Mate 30 Pro has a more advanced Leica Supersensing Cine Camera array which adds 3D depth sensing as the 4th camera and includes the following features:

The Cine Camera sensor uses a wider ratio than its 4:3 counterpart in order to match the aspect ratio that video is usually viewed in. The sensor allows for ultra slow motion at over 7000 frames per second, Pro-Bokeh mode enables real time depth of field effects and 4K HDR is supported in time-lapse mode.


The 5G version of the Mate 30 Pro uses  fourteen 5G antennas and is classed a second generation 5G handset since it supports both the current NSA (Non Standalone Architecture) format and SA (Standalone Architecture) which will become prevalent in the future. It also covers eight 5G bands for global connectivity, compared to say the Galaxy Note 10 5G which covers just three. According to Huawei, downloads using 5G are 25 times faster than 4G and double that of the Samsung Galaxy 10 5G.

Other features include greater integration with compatible smart cars including using the handset to unlock the vehicle, set the environmental conditions or lower the windows. There’s both facial recognition and an under screen fingerprint sensor backed up by ‘the industry’s highest security standards’ and support for Huawei’s M-Pen.

Territories and release dates were not confirmed.


Are there any AVForums members or visitors persuaded by the hardware on offer to look past the lack of Google / Android and check out the Huawei harmony experience? If so, let us know how you get on.