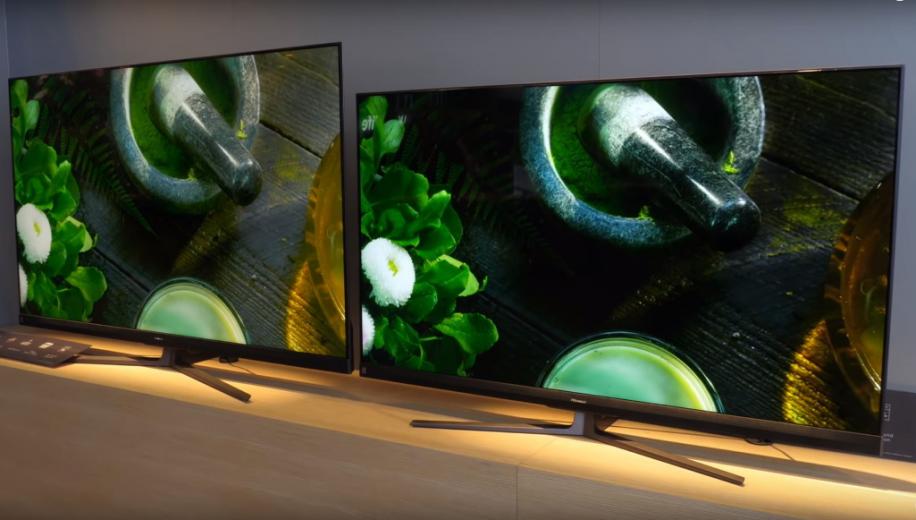 This year sees some changes in Hisense’s TV offerings for the UK. We caught up with the Chinese TV maker at CES 2020 and talked about its very first QLED models coming to these shores and what else they had in store for UK TV enthusiasts.


Last year’s dalliance with OLED TVs may not have gone as smoothly as Hisense would have liked and, while the self emitting technology may have been put to one side, the company still spoke excitedly about its first QLED TVs due to come to the UK in Q2 of 2020.

The quantum dot based premium U8QFTUK and U7QFTUK ULED models are the company’s first to make it to the UK after the US saw the release of a number of QLED models last year, including the H9F models and the top end 75-inch U9F.

Though playing catch up with their compatriots across the Atlantic, TV fans here will find plenty of features included in Hisense’s U8Q and U7Q high-end models. Along with the quantum dot layer to enhance colour reproduction, both ranges carry support for Dolby Vision and HDR10+ dynamic metadata HDR formats bringing them into line with the latest TVs from Panasonic, Philips, Vizio and TCL in catering for movie and TV fans who do not want to worry about whether their TV has the correct HDR support for their preferred content.

Supporting the HDR is Full Array Local Dimming for both the U8Q and the U7Q. The UHD Premium badged U8Q sports around 240 dimming zones and 1000 nits of brightness to help contrast and colours stand out, while the U7Q features fewer zones (Hisense were coy with the number) and around 700 nits of brightness.

Dolby Atmos is also supported in both ranges and the higher end U8Q also features a front firing JBL soundbar.

Both were on show at 55 and 65-inches, with a third size for the U7A being smaller than the 55-inch (possibly a 50-inch model, if last year's screen sizes are an indication). A Unibody design means that all the model’s panels are wrapped in a single piece of metal for a slick looking effect but the stands are slightly different between the two ranges.

Adding the quantum dot layer to the ULED brand is part of Hisense’s ongoing efforts to position themselves in the UK market and provide what consumers are asking for.

Arun Bhotoye, UK Senior Marketing Manager explained, “The technology's evolving, with QLED we can still play around with backlight technology and it still stays very true to our ULED proposition, which is our own property which we carry on backing."

ULED (Ultra LED) is Hisense’s brand name for their LED-LCD TVs and uses a metallic quantum dot filter to enhance contrast and definition to add a premium sheen.

While the Series 6 Roku based Hisense TVs have created interest in bringing the US-based Smart TV system over to Europe, all of the company’s 2020 ranges in the UK will use its proprietary Vidaa 3.0 OS to provide a fast and intuitive user experience which features a new homepage and additional app content since its upgrade from version 2.5 last year. The TVs also have Amazon Alexa built-in for additional control options.

Hisense’s more mid-range offerings have been renamed from last year’s B7500 to A7500 for 2020. Coming in 4 screen sizes, the A7500 is a 4K LED TV with a Unibody look which retains Dolby Vision, uses a wide colour gamut, reaches 300 nits of brightness and features DTS: Virtual X sound to give an immersive audio experience.

Hisense was not in a position to reveal prices for its new QLED TVs but assured AVForums that they would be in keeping with the position of the company as a feature-led brand with competitive pricing.

However, Bhotoye did confirm that the company’s dual cell ULED XD models will not be coming to the UK this year. These TVs use dual layer technology to create enhanced contrast by using a monochrome 1080p LCD panel to control the brightness for a 4K colour LCD panel. Bhotoye gave no promises but indicated that ULED XD could be released over here in the future but as it was still a fledgeling technology there were no confirmed plans.

Have any readers purchased or used a previous Hisense TV model? What has the experience been like? Would you be interested in the latest QLED offerings for 2020? Why not drop us a comment in the discussion thread?