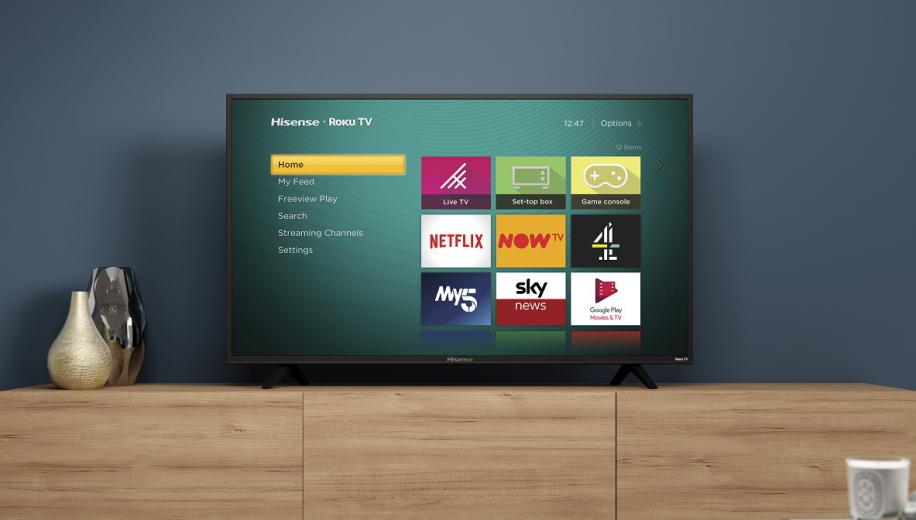 Currently using its own Vidaa U 3.0 smart TV platform, Hisense has announced that it will expand its range and bring Roku TV powered models to the UK for the first time ever, later in the year.
For a lot of consumers, choosing a TV involves, quite rightly, a lot of deliberation over quality of the image processing or supported audio formats but for others, what’s more important is how to interact with the TV and actually find stuff to watch, and for them, though they may not realise it, it’s the TV’s smart operating system that’s crucial.

Speed, simplicity and stability all need to hit the mark otherwise user frustration sets in, followed by swearing, followed by storming off to read a book, because it’s a darn sight more user-friendly!

There’s a whole range of smart operating systems available for the latest TVs. Some are proprietorial, such as LG's webOS, while others are cross manufacturer platforms such as Android TV.

Now though, Hisense will bring Roku TV, one of the US’s most successful smart TV platforms to the UK for the first time in a range of models due for release in the 4th quarter of 2019.

Read Hisense’s press release in full below.
Hisense, celebrating its 50th anniversary in 2019, is set to launch the UK’s first Roku TV™ in Q4. Available in screen sizes up to 65-inches, Hisense Roku TV models will be powered by the Roku OS, and offer customers amazing content and incredible choice.

Roku’s confidence in Hisense to launch the first Roku TV models in the UK market is testament to the manufacturer’s growth and successful brand development in the UK. The Roku platform offers consumers a wide variety of entertainment including many of the leading streaming and catch up services. Hisense Roku TV models will enable customers to access more of their favourite HD, 4K and 4K HDR content, much faster and more simply than ever before, thanks to the intuitive interface bringing [all] entertainment sources together in one customizable home screen.

Senior marketing manager at Hisense, Arun Bhatoye, said: “Roku offers a fantastic TV streaming platform that offers consumers an incredibly simple, fast and easy entertainment experience filled with tons of catch-up and streaming services offering tons of quality content at their fingertips. It’s been fantastic working with Roku and I can’t wait to see these new Hisense Roku TV models on the shelves in time for Christmas.”

“2019 is an exciting year for Hisense as we are celebrating our 50th anniversary. We are connecting with consumers in new ways as we are about to be a key, leading sponsor of a third major international football tournament in a row and we have just announced we will release the first Roku TV model in the UK - three huge landmarks!”

”Roku TV models offer consumers a great smart TV experience while giving TV manufacturers an attainable way to build great smart TVs. We know customers will love how easy they are to use, the vast amount of content they have access to and our commitment to keep the experience current over the years,“ said Bart Bomers, Vice President of EMEA at Roku.

Have you got a favourite smart TV operating system? How far up the list of considerations was it when you bought your TV? Are you interested in what Roku TV might offer on the new Hisense models? You're welcome to discuss it in the thread.