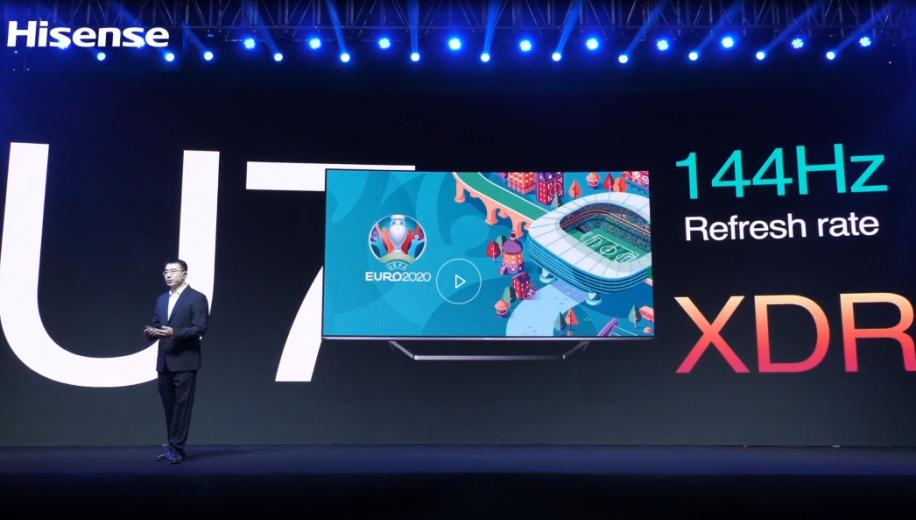 Hisense has announced a 144Hz ULED TV plus the 100L9 Pro 100-inch Trichroma Laser TV Limited Edition as part of the company’s push for big screen home entertainment in 2021.

At Hisense’s CES 2021 online presentation, the company announced that, in 2021, it will be introducing new in house Mini LED and 8K processing chips for the company’s ULED range of TVs. Unfortunately, there was no further information other than the confirmation that, as the official sponsor of the rescheduled Euro 2020 football tournament, Hisense will introduce a customised version of the ULED U7 series to mark the occasion.

This TV will feature a 144Hz refresh rate to help capture the on pitch action along with an ‘extremely high dynamic range’ to bring fans even closer to the experience of being in the stadium.

Among the 20 new picture quality and AI products Hisense is planning on introducing in 2021 will be a mass produced 4K 120Hz dual screen chip which is the industry’s first single chip solution that supports Mini LED direct backlight control for over 5000 zones. An 8K 120Hz image processing chipset is also planned.

Also planned for this year are a Sonic Screen Laser TV, a mass produced self-rising laser TV and a 10,000+ lumens commercial Laser TV, though no details on any of these were offered.

What is clear though is Hisense’s commitment to laser based home entertainment as it pushes to bring all of its laser TVs into the TriChroma era which brings with it almost the full range of colours recognised by the human eye.

In the 5 years since Hisense introduced its first generation laser TV at CES 2015, the technology has seen improvements in the light source move from laser-phosphor to dual colour laser and now RGB lasers, along with image sizes increasing from 75 to the 300 inches now planned for 2021.

This year, the new TriChroma Laser TVs, including the 100L9 Pro Limited Edition version, will feature newly designed RGB laser architecture which sees the different colour lasers separately packaged and controlled. This is a “high class DLP solution” which helps achieve a 128 percent improvement in the original RGB colour. TriChroma also attains 20 percent brightness enhancement at the pixel-level with a 430-nit picture brightness, exceeding that of a regular TV.

Since the colour gamut coverage reaches up to 151percent of the DCI-P3 film colour standard (and 107 percent of the BT2020 standard) it is almost 50 percent beyond high-end cinema and delivers an immersive theatrical viewing experience for audiences at home.

The new TriChroma Laser TV also comes equipped with a 100-inch Fresnel screen with an enhanced viewing angle that eliminates ambient lighting and since Laser TV is a reflective technology it also kinder on the eyes.

Beyond the movies and TV, the TriChroma Laser TVs will incorporate AI smart cameras enabling social interactions, such as karaoke as well as fitness.

Prices, availability and territories were not discussed but it seems Hisense’s ambitions for laser TVs are only just getting started.