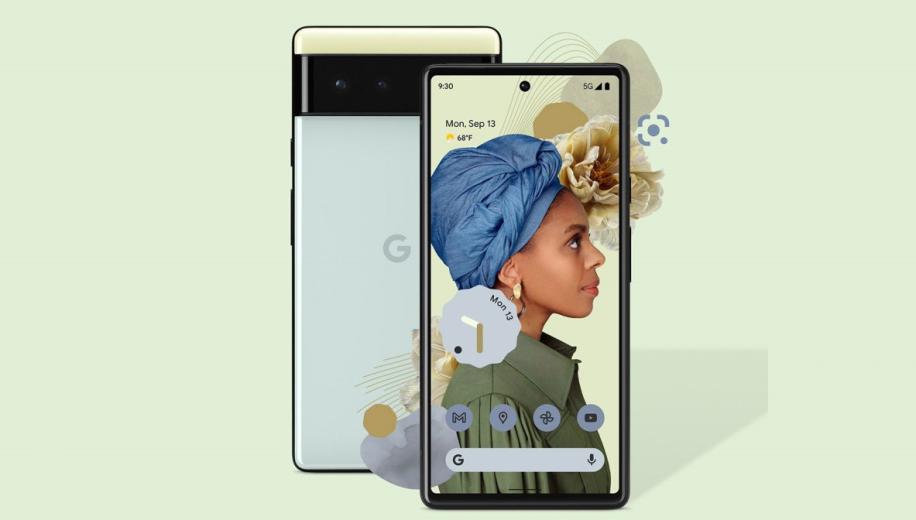 Google’s latest smartphone handsets, the Pixel 6 and Pixel 6 Pro have been officially announced and each contains the brand new Google Tensor system on a chip which helps deliver the company’s expertise in AI and machine learning, representing a leap forward for those features in a mobile format.

With plenty of information already available, some of it sanctioned by Google, the launch event held few surprises but did reveal more fully the details of the Pixel 6 and Pixel 6 Pro, showcasing the updates to the camera hardware, the new Tensor processor and software designed to take advantage of both.

Both new Pixel models sport a refreshed design featuring subtle two-tone colour hues separated by a raised black camera bar on the rear. The smaller Pixel 6 has a smaller amount of space above this horizontal bar which helps quickly identify it at a glance from the 6 Pro version. Both have a rear finished in Gorilla Glass with the Pro version sporting Corning’s latest, toughest version, Victus, for even greater protection, and both use Gorilla Glass Victus for protection at the front giving them double the scratch prevention of previous models. Further durability is added thanks to the IP68 water and dust resistance.

Screen-wise, the Pixel 6 has a flat 6.4-inch OLED display with Full HD+ resolution of 2400 x 1080 which offers a 90Hz refresh rate, while the 6 Pro has a 6.7-inch QHD+ LTPO OLED display with a resolution of 3120 x 1440 pixels in a gently curved waterfall design which ‘melts’ into the polished aluminium frame. The Pixel 6 Pro display also features a variable refresh rate from between 10-120Hz depending upon the content on screen. This has the advantage of preserving the battery as well as always ensuring a smooth response.

Both models come with a high brightness mode to support HDR content and each has an under display fingerprint sensor for unlocking the phone.

Housed within the camera bar of the two Pixel 6 phones are a 50 megapixel, 1/1.31-inch sensor with a f/1.85 aperture and 82° field of view plus a 12MP f/2.2 ultra wide angle camera with a 114° field of view. The Pixel 6 Pro adds a third lens to go with its flagship status and this is a 48MP sensor with a folded telephoto lens featuring 4x optical zoom (and up to 20x digital zoom).

These camera arrays are supported by laser detect auto-focus which delivers improved sharpness in low light conditions, and there’s optical and electronic image stabilisation too.

The cameras are supported by Google’s expertise in computational photography plus the new Tensor chip, and images can be enhanced by a number of features including Motion mode which captures moving objects and gives them a sense of velocity by selectively blurring elements of the image. At the other end of the scale, Unblur combines images from two different cameras to remove the blur on faces when you take photos of fast-moving subjects such as the nippers who are constantly belting around. Meanwhile, Real Tone is an improved image algorithm that optimises the white balance for each different skin tone in a photograph, even when in groups. There’s also the usual Night Sight, Portrait and Cosmetic Pan modes and editing tools in Google Photos such as Magic Eraser can remove unwanted objects (and people!) from your snaps.

Front facing selfie cameras are an 8MP snapper with an 84° field of view on the Pixel 6 and an 11.1MP shooter covering 94° degrees on the Pixel 6 Pro.

As smart phones add new and improved functions, battery life needs to keep up and Google anticipates 24 hours of use since the Pixel 6 comes with a 4614mAh battery while the larger Pixel 6 Pro has a commensurately increased 5003mAh unit. With 30W wired charging available to both, 30 minutes should see 50-percent battery life restored - note that the charger is a separate purchase but a USB compatible charger should work. Both also support wireless charging starting at 12W from a Qi charger and increasing to 21W on the smaller phone and 23W on the flagship with the second generation Pixel Stand.

With Android 12 on board, Google has introduced a new user oriented interface called Material You which offers increased customisation, and a more security conscious approach which allows users to see what personal data apps may be requesting access to and there are easier one-touch options to switch off mics and cameras too.

The Tensor chip, which has taken a number of years of development, will allow both hardware and software innovations to be implemented in Pixel phones going forward and it forms the foundation upon which Google’s expertise in AI, machine learning, voice commands, live translation, dictation and captioning can be improved.

Of course, there are speed and efficiency benefits too with the Pixel 6 running at up to 80-percent faster than the Pixel 5. Additionally, the Tensor now enables up to 4 years of OS updates and 5 years of security fixes too. Security is further boosted since the Tensor integrates with the Titan M2 security core where sensitive data manipulation is handled away from the more generic computational functions.

Other features include stereo speakers and dual SIM support, though there’s no 3.5mm headphone jack or expandable storage.

Rather than buy the new phone outright, Google is offering Pixel Pass, a monthly subscription for the handsets which includes an upgrade in two years, an extended warranty bundle, 200GB of Google One storage, Google Play Pass, YouTube Premium and YouTube Music Premium. The Pixel 6 will cost $45/ month while the Pixel 6 Pro will set you back $55 per month - UK prices were not available.

Customers who pre-order in the U.S. get a free Pixel Buds A-Series while Pocket-lint has revealed that a free pair of Bose Noise Cancelling Headphones 700 worth £350 will be included for those in the UK when they preorder from Argos, Carphone Warehouse, Currys, the Google Store or the EE, O2, Three or Vodafone networks. This preorder offer runs from now until 27th Oct and familiarising yourself with the T&Cs at  pixel-offers.com/headphones is recommended.