It's feature-packed and can even support Dolby Vision 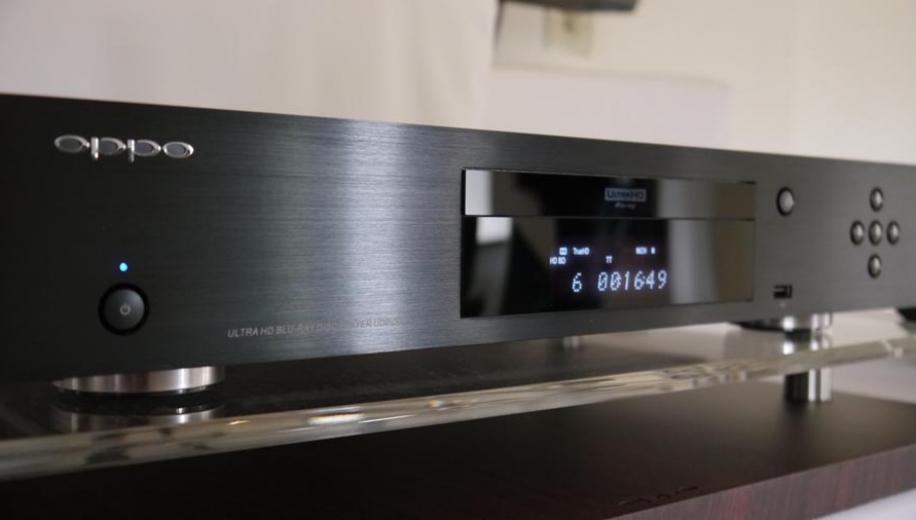 Oppo UDP-203 UHD Blu-ray Player (2016)
SRP: £649.00
The 4K Ultra HD Blu-ray format may still be in its infancy but there’s only one player manufacturer that AV enthusiasts are really interested in and that’s Oppo.
The company has made a name for itself over the years thanks to the higher quality and superior performance of its disc players, first with DVD and then more recently with Blu-ray. They were winning awards with their very first Blu-ray player the BDP-83 and they picked up AVForums Reference Status badges for both the BDP-95 and the BDP-105. So whilst Oppo are rarely the first to market, they are almost always worth the wait. When Oppo first announced its plans to develop a 4K Ultra HDR Blu-ray, there was a great deal of anticipation because enthusiasts knew they would take their time to deliver the best player possible. The general consensus was that the new player would be launched at CES in January, so there was considerable excitement when it actually broke cover at CEDIA last week. The new player is called the UDP-203, it will be available in the UK later this year and will probably cost £599.

Oppo were keen to stress that the new player has been built from the ground up as a dedicated Ultra HD Blu-ray player. The company said that previous UHD Blu-ray players had used TV decoder chips and computer optical drives in their design and construction. Oppo and Mediatek have invested millions of dollars in developing a dedicated Ultra HD decoder and the result of all this effort is the quad-core OP8591. This custom designed SoC (System on Chip) not only decodes all the main 4K formats like HEVC and VP9 but also supports wider colour gamuts up to Rec. 2020 and High Dynamic Range in form of HDR 10. However since this new chip has been custom built for Ultra HD Blu-ray, crucially it can also support Dolby Vision. Oppo hopes to add this new feature via a firmware update before the end of the year, although the time frame is dependent on certification from Dolby, which is outside Oppo’s control.


You can watch our video of the Oppo launch event below:

The UDP-203 not only supports 4K UHD Blu-ray and media playback, along with HDR but it also converts HDR to SDR (Standard Dynamic Range) for non-HDR displays. The player also supports 2D and 3D Blu-ray, DVD Video/Audio, SACD and CD. The player uses an optimised laser mechanism that not only allows for universal disc support but also isolates the tray and makes loading quieter. This attention to build quality extends to the brushed aluminium front plate and robust metallic construction. The UDP-203 uses an ES9038 DAC for top-of-the-line digital-to-analogue performance and a fully balanced design for the best signal quality. The Oppo supports lossless high resolution audio and the latest surround formats like Dolby Atmos and DTS:X. It also includes twin HDMI outputs (one is HDMI 2.0a and the other is HDMI 1.4) to allow for backwards compatibility with older receivers and there are even 7.1-channel analogue outputs. There are also two USB 3.0 ports, a gigabit Ethernet port and built-in WiFi.

The basic design and layout of the UDP-203 is very similar to the BDP-103, with a centrally mounted disc tray and a large and informative display directly below it. On the right hand side there are basic navigation controls and a tray open/close button, whilst on the left hand side there is a an on/off button. The remote control is also similar, although the backlight comes on as soon as you pick it up, which is a new feature. There is also a button on the remote that says HDR and although it doesn’t currently do anything, the idea is that you can select different HDR formats when that becomes an option. Finally Oppo have given the home page and menu system a long overdue redesign.

MORE: What is Dolby Atmos? There was a UDP-203 connected to an LG 65E6 at the demonstration and we were able to watch scenes from the Ultra HD Blu-ray release of Deadpool, a disc with which we're very familiar. The images being produced by the Oppo were superb and the player itself was quiet and responsive. The new remote control felt comfortable in your hands and the new home screen and menu systems are a big improvement over previous generations. Overall the UDP-203 was exactly what we expected from Oppo, an attractive, well laid out and solidly constructed Ultra HD Blu-ray player with plenty of great features.

The Oppo UDP-203 has been designed to deliver the best possible audio and video experience from the new 4K disc format and based upon what we have seen so far, it looks as though they have achieved their goal. If you’re thinking don’t Oppo usually launch two players, you would be correct. There will be a second player released, either later this year or early in 2017. We suspect this second player will be called the UDP-205 and will have greater emphasis on its audio performance if previous generations are anything to go by. However in the meantime, the new UDP-203 looks like just the player that AV enthusiasts have been waiting for.