Our ‘to do’ list for the year ahead has just got a whole lot bigger... 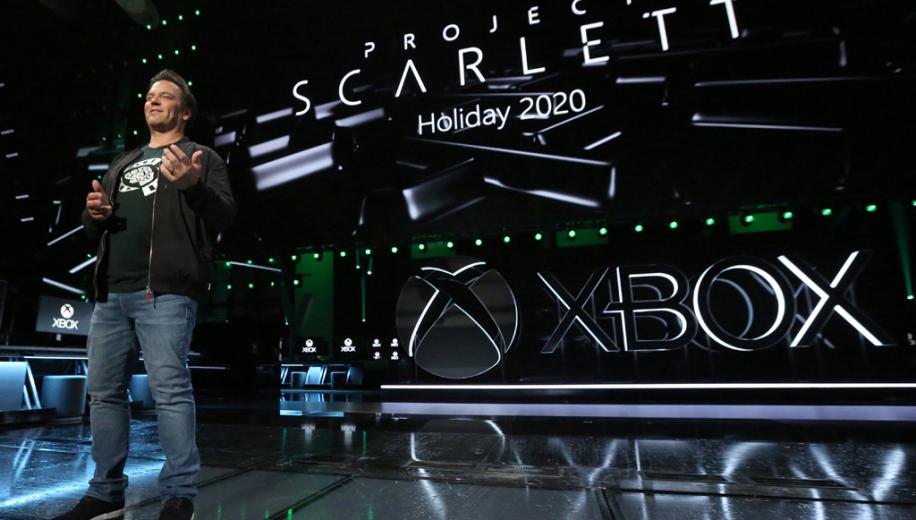 With Sony opting to skip this year’s Electronic Entertainment Expo, or E3 as it has long since been known, it was a great opportunity for Microsoft to make itself heard during its keynote presentation – and with details on its next-gen console and a glut of games on show there was certainly a lot to talk about. Best of all, it was almost entirely about gaming, with all that hype about the Xbox One being more of an entertainment hub thankfully a thing of the past. And there were plenty of big announcements, as well as a showcase of many other big multi-platform titles – so even if you’re not an Xbox fan there might still be something here for you... As featured in our earlier news story, the headline of the show was a further teasing of the next-generation console, currently codenamed Project Scarlett. Although details were relatively scarce, it was given a launch window of ‘Holiday 2020’ and a launch title in Halo Infinite. Because you can’t have a new Xbox without Master Chief leading the fight, can you?

A video showed members of the Xbox team talking up the potential for the powerful new console, with mentions of 120FPS, 8K, variable refresh rates and the near-removal of loading times. It’s said that it will be four times as powerful as the Xbox One X, with up to 40 times improvement in overall performance, leading to higher resolutions, better framerates and more – which roughly translates to far more realistic and seamless worlds to immerse yourself in. There was talk of increased cross-platform and cross-device compatibility – although no word on compatibility with existing Xbox One titles (though if Microsoft learned anything from the Xbox One launch this should be a no-brainer).

As to how 343 Industries can make the most of the new console for Halo Infinite remains to be seen, although the video on show was a cutscene from the in-game engine and looked on a par with many a CGI trailer we’ve seen in recent years. Word from the developer is that Infinite will mark something of a ‘spiritual reboot’ for the franchise, setting off a new generation of adventures so that those who haven’t played the previous games can jump in without missing out on too much. But rest assured that along with the new characters – plus with a new look for the Chief courtesy of a new game engine – there will be much that remains the same. First announced at last year’s show with the shortened moniker, Gears 5 has been dated for launch on 10 September 2019, with Xbox Games Pass Ultimate owners getting access four days earlier. Not much more has been shed on the main campaign, which sees new recruit Kait Diaz joining the Fenix family to search for the origins of the Locust Army, but more info will follow in the build-up to launch with multiplayer testing next month and further insight to the revamped Horde mode due in August. We did get to see a new game mode, called Escape. A three-player co-op mode (local and online) this sees you infiltrating a hive nest, planting a bomb and legging it to safety. The hook is that the bomb emits a toxic cloud that relentlessly pushes you forward, all the while scrambling for weapons and ammo to tackle the many enemies blocking your path to safety. It looks like it should be a lot of fun and, with the option to create and share your own hives for others to test their mettle in, it could become a popular addition to the Gears community. In a more family-friendly offering, there were two new LEGO-based announcements. First up was LEGO Star Wars: The Skywalker Saga, coming to PC and the PS4 as well as Xbox One in 2020. Effectively rebuilding the many Star Wars games that have come before it, this all-new collection from TT Games will cover all nine Star Wars films, including the upcoming The Rise of Skywalker, giving gamers the choice to jump in and out of each of them at their own preference. We keep saying that we’ll get bored with the LEGO games one day, but we still keep coming back for more.

One surprisingly appealing reason to smash up yet more bricks was announced with the Forza Horizon 4 expansion pack, LEGO Speed Champions. This provides a new game world to drive around in – one built largely of highly smashable LEGO of course – with a variety of new challenges and that addictive allure of collecting bricks and studs for even greater gains. There’s little time to wait either, with the DLC hitting on 13 June, priced at $19.99 (no UK pricing as this was written) – or free to those who’ve already bought one of the ‘Ultimate’ or ‘Expansions’ versions of the game.

There was a decent amount of further Xbox-exclusive content on show – though some of these will also be available on Windows 10 PCs. The first to take to the stage was Bleeding Edge, the latest offering from UK developer Ninja Theory that has previously made the likes of Hellblade, DmC: Devil May Cry and Enslaved. It’s a character-driven melee combat game, which will see two teams of four battle it out in a tactical multiplayer arena. It has a Borderlands look to it and all being well it will do just as well not to take itself too seriously. You can get a first look at the gameplay when the alpha testing kicks off on 27 June – though no full release date has been given as yet.

After Ninja Theory joined the Xbox ranks last year, 2019 saw the announcement that Tim Schafer’s Double Fine Studios has also signed up – with Psychonauts 2, the long-awaited sequel to the 2006 classic, set to be its next title. Another interesting addition sees the popular Phantasy Star Online 2 finally making its way to the west in 2020. The very good news is that all content will be free to play – and we’re assured that micro-transactions will be offered purely as an aid and not to give wealthier players an unfair boost.

Elsewhere we caught a look at the new Heartland DLC for State of Decay 2, which brings two new entwining stories into the zombie apocalypse. There was a gameplay trailer for Ori and the Will of the Wisp – a sequel to Ori’s 2016 platform-based adventure to The Blind Forest – and a first look at Blair Witch. The announcement video for this psychological horror title gave us a notable Alan Wake vibe, as an ex-cop searches for a missing boy in the woods. There was also a glut of indie games on show, with the likes of 12 Minutes catching the eye, which places the player in a small top-down location, where a time loop sees the mysterious events surrounding a murder play out in a variety of contrasting and conflicting ways. Being a Microsoft event, it was no surprise to see a few PC games given a mention, with the new PC Games Pass announced last month to partner the existing Xbox version which gives players access to a wealth of games for a monthly subscription – with a new Ultimate version combining both passes along with your Xbox Live Gold membership. At the show, it was announced that the Halo: Master Chief Collection would be making the move to PC as part of the roster, with the likes of Football Manager 10 and Imperator: Rome also available. The PC Game Pass is currently in the open beta stage and should get a full launch in August.

Also making the presentation was the announcement of a new Flight Simulator game (also coming to Xbox One), boasting 4K visuals captured in real-time and combined with satellite data to give some impressively accurate locations to fly between. There was also a look at the enhanced Age of Empires II: Definitive Edition, bringing the 2001 strategy classic back to life, and a teaser trailer for Wastelands 3; a game that is increasingly looking to have nailed an impressive style for this latest assault on its post-apocalyptic world. Plus, we got a first trailer for Way to the Woods, a hugely-impressive looking game, modeled on the animation style of Studio Ghibli, that sees a female deer trying to steer her young fawn through a strange urban world. BEST OF THE BEST

As is often the case, the Xbox Briefing also served as a showcase for plenty of big hitters not restricted to Microsoft’s own platforms. Minecraft Dungeons was announced for spring 2020, offering up a dungeon-crawling spin on the mega-franchise that sees players fighting monsters and hunting for loot in a 3D isometric world shaped in Minecraft’s unique, though much copied, style. There was also an interesting teaser for Elden Ring, a game developed by FromSoftware (of Dark Souls and Bloodborne infamy) in collaboration with A Song of Fire and Ice author George R. R. Martin. Not much was given away besides a stylish teaser video, but we’re told it will be the developer’s largest game to date and could well be something special.

Elsewhere, Star Wars Jedi: Fallen Order made the jump from EA’s own presentation the day before (and due in 2020), while there were also new trailers for the likes of Borderlands 3 (out 13 September) and Dying Light 2 (spring 2020), with action-RPG The Outer Worlds also getting its own launch date confirmed for 28 October. The ‘Dragon Ball Project Z’ brawler was confirmed with the title Dragon Ball Z: Kakarot with angry men talking smack in a new trailer, while a new addition to the Tales of franchise was announced in the form of Tales of Arise (coming 2020). Our eye was also caught by Spiritfarer, an indie game with a hand-drawn art style that sees you playing as ferrymaster to the deceased, tying in complex emotional issues along with common gameplay elements such as farming and mining for resources to manage your guests and build up your boat. It's certainly one to watch in 2020. However, stealing the show was the hugely anticipated Cyberpunk 2077. Not only were we finally given a launch date of 16 April 2020, but we were also treated to Keanu freakin’ Reeves taking to the stage to big up this potentially epic title from CD Projekt Red, the studio that had previously done very good things with The Witcher 3. It turns out he’ll be playing a key character in the game called Johnny Silverhand – complete with voice and full body capture – and from the brief glimpse we saw of him in action, it looks like he’ll be a bad-ass ally for the lead character to bounce off. We’ve seen a lot of the game before but, despite the in-game sequence on show during the presentation, we’re once again left wanting more.

All in all, it was an impressive offering from the Xbox Game Studios steam. There’s still a lot more to come before we really know the finer points of what Project Scarlett is about but there was a rich combination of new announcements, console exclusives and some multi-platform big hitters all making a mark. Excusing the new console, the announcement of a new Elite Wireless Controller 2 (3 custom profiles, 40-hour battery life) and further talk of Project xCloud, which is designed to turn your Xbox into your own personal server (coming in October), the best thing was that it was otherwise all about the games – with some 60 in total getting airtime during the presentation. Suddenly our ‘to do’ list for the year ahead has just got a whole lot bigger…