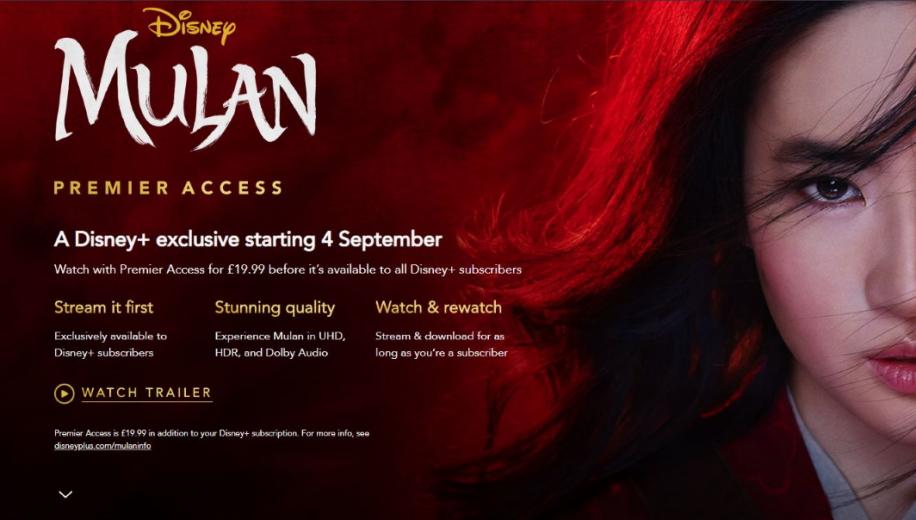 Disney has finally confirmed what most UK fans and industry watchers were expecting, Mulan is coming to subscribers of its Disney+ UK streaming service for a Premier Access fee of £19.99 from 4th September.

After a seemingly protracted period of cat and mouse style guessing games, the UK finally joins other territories such as the US, Canada, Australia, New Zealand, and other Western European markets which have restricted or limited access to cinemas in premiering  Disney's live action remake of Mulan on its DisneyPlus UK streaming service. The announcement was made via the company’s social media platforms with the tweet announcing “The legend arrives.”

In all applicable territories, this will be accompanied by an additional fee ranging from £19.99 in the UK to $29.99 in the US and €21.99 in European countries such as the Netherlands. Available in 4K with HDR and Dolby Atmos to help promote the theatrical experience for those with compatible TV setups, once purchased, Mulan will be available for repeated viewings as long as the Disney+ subscription is active.

In markets where the company’s streaming service is not yet available, Mulan will show in cinemas, though the release schedule is likely to be quite fragmented depending upon local Covid-19 circumstances.

In addition, Disney has decided to reach beyond its huge 60 plus million subscriber base and include the release on Premier Video on Demand services run by the likes of Apple, Google and Roku, thus opening up the potential audience. However, there are conflicting reports, with Film Stories quoting a Disney insider saying this option won't be available to UK viewers while What's On Disney Plus reports that it will be.

There’s a lot riding on the success or otherwise of Mulan’s foray directly into consumer’s homes and it could pave the way for further similar releases from Disney in the not too distant future.

Has the newly revised price made the decision for UK Disney subscribers a little bit easier about whether to purchase Mulan or not? Let us know in the comments section and also come back and tell us what you thought of the film.