Going out on top 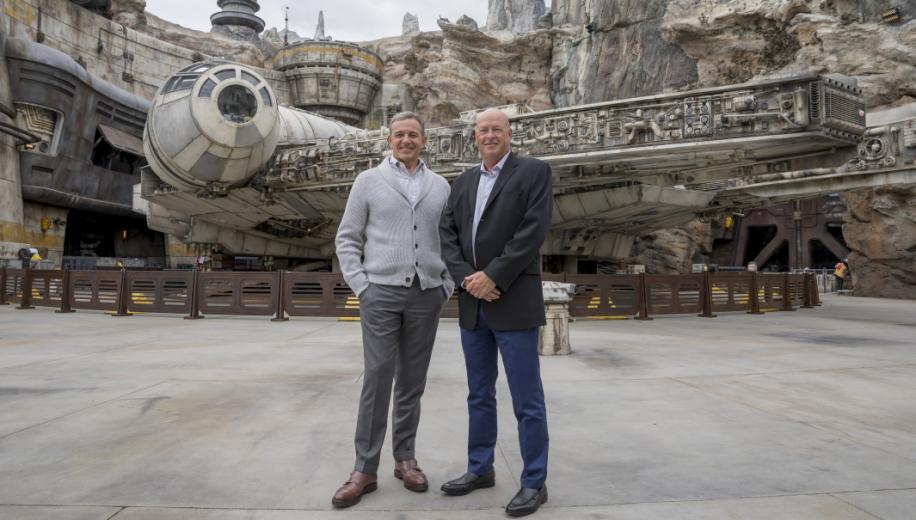 After 15 years as CEO of The Walt Disney Company, Bob Iger is stepping aside, with immediate effect.

The Walt Disney Board of Directors has announced his replacement will be Bob Chapek (pictured above right, with Iger) who most recently served as chairman of Disney Parks, Experiences and Products. Iger will take on the mantle of executive chairman and will direct the company's creative endeavors until his current contract expires on December 31, 2021, the company said.

Stepping into the CEO role vacated by Michael Eisner in 2005, Iger was originally due to have stepped aside in 2018 but the company opted to extend Iger’s tenure until the end of 2021. Now however, he is moving aside almost two years early and will spend that time ensuring a smooth and successful transition to Chapek who has now become the company’s seventh CEO in its almost 100 year history.

During his 15 year tenure as CEO, Iger oversaw many changes that transformed Disney into a media behemoth with the acquisition of Lucasfilm, Pixar, Marvel, and most recently the $71 billion (£55 bn) take over of 21st Century Fox ensuring that Disney had access to some of the most beloved media properties and characters of the last 40 years which have been used to break Box Office records around the world.

Possibly his lasting legacy though will be Disney’s streaming service, Disney+, which began its rollout at the end of 2019 and which has already proved hugely popular, a popularity which is sure to grow as more territories get access to the service.

The statement issued by the company stated that under Iger’s, the Company’s market capitalization had increased fivefold and that it had “reached unparalleled financial and creative heights thanks to Mr. Iger’s strong leadership and clear strategic vision.”

Chapek, already a Disney veteran of 27 years brings plenty of experience having overseen the opening of Disney’s first theme park in China and the creation of the Star Wars Galaxy’s Edge ride and multiple Marvel themed attractions at the company's theme parks. As President of Walt Disney Studios Home Entertainment, he spearheaded the successful “vault strategy” for the Company’s iconic films and transformed the primary format of home entertainment from DVD to Blu-ray.

In the press release, the outgoing Iger commented,”With the successful launch of Disney’s direct-to-consumer businesses and the integration of Twenty-First Century Fox well underway, I believe this is the optimal time to transition to a new CEO.

“I have the utmost confidence in Bob and look forward to working closely with him over the next 22 months as he assumes this new role and delves deeper into Disney’s multifaceted global businesses and operations, while I continue to focus on the Company’s creative endeavors.”

Let us know what you think of this news, does Iger leave a legacy to be proud of or has Disney’s content land-grab stifled creativity in the movie industry?