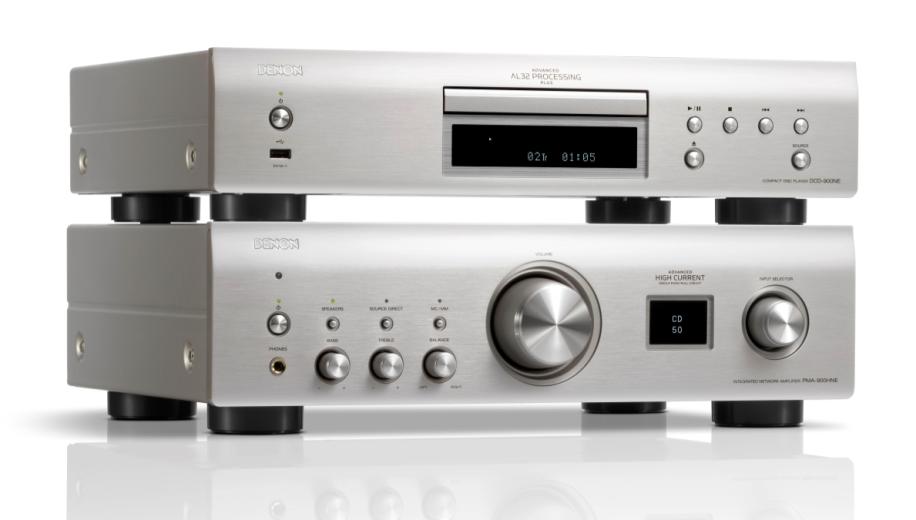 Denon has announced the impending arrival of three new products, with its new premium amplifier, the PMA-1700NE set to be joined by two new 900 Series models: the PMA-900HNE amp and DCD-900NE CD player.

As the doors open on this year’s Munich High End Show, Denon was among the first on the scene with not one, but three new announcements. With two new amps, lead by the PMA-1700NE and joined by the PMA-900HNE model including the company’s first HEOS built-in integrated amplifier in a standard-sized chassis, plus the DCD-900NE CD player featuring USB playback, Denon’s stand at the show should prove a popular destination for the next few days.

The PMA-1700NE high-current integrated amplifier boasts of an “outstanding audiophile-grade listening experience”, offering 140W per channel. It’s compatible with a range of analogue and digital sources with optical and coaxial inputs, A/B speaker and subwoofer outs, and there are also inputs for moving magnet and moving coil phono cartridges to appease vinyl enthusiasts.

The amplifier supports high-resolution digital audio up to 32-bit/384kHz and 11.2MHz DSD, with a high-performance DAC that “effectively suppresses jitter for best performance”. We’re also assured of a vibration-resistant design for maximum isolation, as part of a premium package including gold-plated speaker terminals and analogue source-inputs to prevent corrosion, with Denon describing the PMA-1700ME as being “beautifully built to last.”

Joining the company’s 900 Series roster, the PMA-900HNE is the company’s first HEOS built-in integrated network amplifier and is “poised to be the centre of the living room for watching TV, playing games or listening to music”. It delivers 85W per channel and offers Wi-Fi streaming plus the likes of Apple AirPlay 2, Bluetooth and its own HEOS multi-room audio capability. The PMA-900HNE is compatible with ALAC, FLAC and WAV lossless files up 24-bit/192kHz, plus DSD 2.8MHz and 5.6MHz tracks.

Completing the line-up is the DCD-900NE CD player, unsurprisingly billed as a prime stacking companion for the PMA-900HNE. According to the company, “Denon engineers have incorporated the most advanced AL32 Processing Plus digital signal processing and filtering that reproduces each recording with astonishing precision and clarity” for the model. It also features an integrated USB port that supports high-resolution playback up to PCM 24-bit/192kHz and DSD 2.8MHz/5.6MHz. It also boasts of a vibration-resistant design that keeps unwanted energy at bay, “delivering only the purest audio signal in any system.”

Speaking on the announcement of all three products, Trip Randall, brand president for Denon said: “We are so excited to present these new products at the High End Show in Munich. Denon engineers have designed these components to achieve the perfect balance between outstanding performance for both digital and analogue sources with connectivity for a vast array of devices and media, providing music enthusiasts with the ultimate home entertainment solutions built with the care and attention to detail consumers expect from Denon. We are very proud of the new PMA-900HNE as the first standard size HEOS-Built-In 2-channel integrated Denon amplifier; it is the perfect starting building block for the new generation of music enthusiasts giving access to digital music and streaming with the superb Denon sound at an affordable price.”