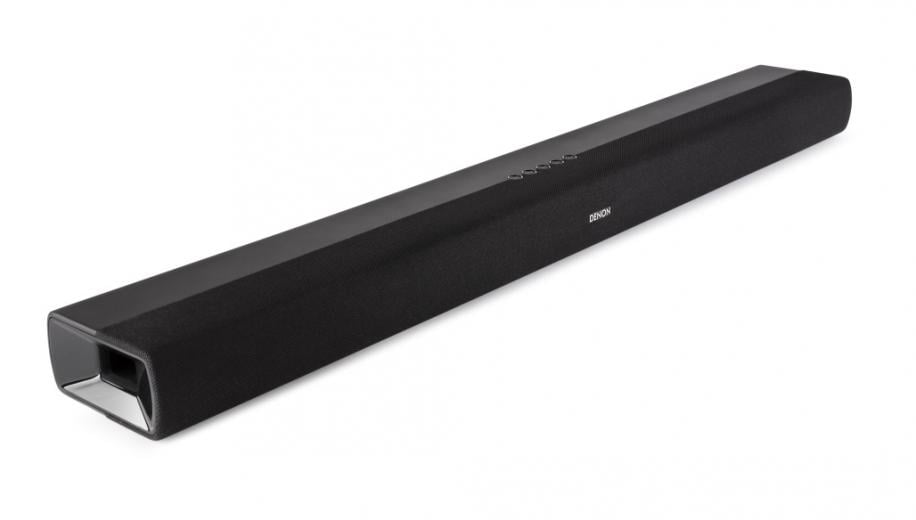 Denon’s first All-in-One soundbar to feature DTS Virtual:X comes in at a reasonable £199 and, once connected to an HD or 4K TV via the HDMI-ARC or optical input, it uses advanced 3D algorithms developed by DTS to realistically simulate a multi-channel soundtrack played on a home theatre surround sound system. The resulting audio immersion gives a sense of dimensionality without the need for additional speakers.

The low profile design of the soundbar (it’s a mere 6cm tall) means that it can be situated in front of most televisions without obscuring the screen or blocking the IR remote sensor, though there’s also an option to wall mount if that is preferred.

Despite the slimline nature of the DHT-S216, Denon has packed in two 3-inch down-firing subwoofers, two racetrack-sized dual mid-range drivers and two 1-inch tweeters, and the sound from these has been tuned by Denon’s technicians to deliver high quality playback of music and movies.
The DHT-S216 can decode Dolby Digital for a discrete multi-channel surround sound experience, and a range of audio modes - including Movie, Music or Night mode - can be used to tailor the sound to the listener’s current content type and time of day. Activating Pure Mode eliminates surround processing and removes any adjusted EQ characteristics associated with these preset modes for a more precise and open sound.

The DHT-S216 provides connectivity for TVs and other sources such as games consoles or Blu-ray players via a 4K UHD HDMI input or an optical input if HDMI is not an option. There’s also an HDMI output that supports Audio Return Channel, so any audio source connected to the TV can send its signal via the TV to the soundbar. Both HDMI sockets support 4K/60 Hz and HDCP 2.2. Connection via HDMI ARC also enables seamless control using the TV remote.

The DHT-S216 will also support wireless streaming of music, podcasts and other audio content once paired to appropriate sources such as smartphones, tablets and laptops via Bluetooth.
Michael Greco, Global Sr. Director of Brand Management for Denon said, “The latest soundbar from Denon has been engineered to deliver the most lifelike listening experience, including detail, balance and bass extension far beyond other soundbars in this size and price range.”

Greco added, “The DHT-S216 leverages partnerships with the industry’s leading virtual surround sound manufacturers like DTS and Dolby to provide people with a simple way to experience the excitement of cinematic sound quality at home.”

Does the DHT-S216 sound like a worthwhile addition to your TV set up? Let us know in the thread what you think.