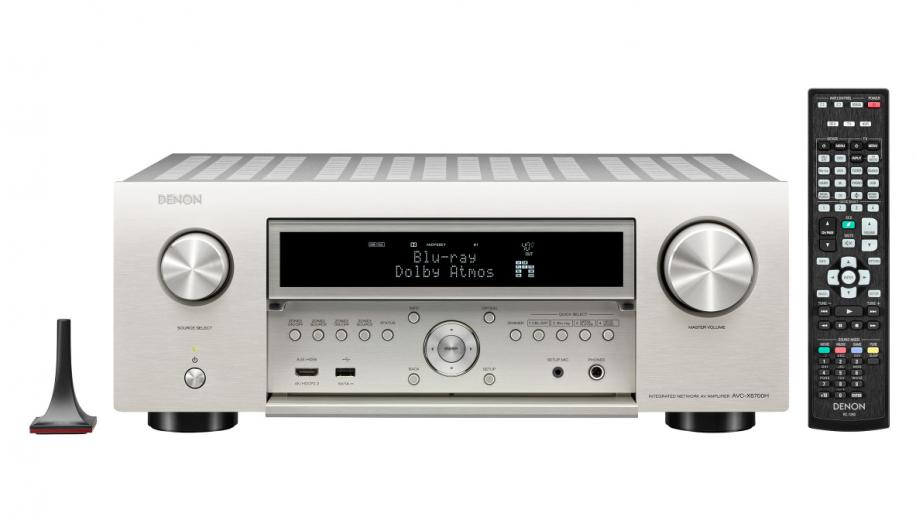 Building on its renowned X-Series AVRs, Denon is claiming the 8K capabilities of its 2020 iteration will usher in the next generation of home theatre, music and gaming experiences. Incredibly, the announcement marks the 110th anniversary of the famous audio company and is testament to its presence at the forefront of audiovisual technology development.

As the first 8K-ready AVRs, the X-Series, which consists of the AVC-X6700H, AVC-X4700H, AVC-X3700H, and AVR-X2700H models, all newly feature 8K upscaling to compatible 8K TVs. plus 8K/60Hz and 4K/120Hz pass-through along with the introduction of Variable Refresh Rate (VRR), HDR10+ compatibility, Dynamic HDR - which optimises the performance of HDR TVs with Dynamic HDR with scene-by-scene or frame-by-frame dynamic metadata - along with Quick Media Switching (QMS) and Quick Frame Transport( QFT).

A dedicated ‘8K’ HDMI input will enable the new services, including Quick Media Switching (QMS), which allows a source to instantly switch the resolution or frame rate to eliminate screen blackout.

Gamers will benefit from the 8K preparedness once the next generation of games consoles become available at the end of the year when they can take advantage of more fluid and better detailed gameplay with reduced lag courtesy of VRR, QFT and ALLM.

With eARC support, seamless connection to compatible TVs, streaming devices, games consoles and other source players allows uncompressed and object based audio to be transmitted to the AVR, which automatically detects the appropriate audio format.

Support for virtually all 3D audio formats,including Dolby Atmos, Dolby Atmos Height Virtualization Technology, DTS:X, DTS Virtual:X, IMAX Enhanced and Auro-3D is available moving through the X-Series range with the higher models adding greater support. Thus, the Auro 3D engine is supported by the X6700H and X-4700H while these both also support IMAX Enhanced, as does the X-3700H. This allows listeners to enjoy the latest in IMAX Enhanced films in 7.2.6 or 9.2.4 speaker configurations thanks to newly adopted 13.2 channel processing capabilities with external amplification.

The high end X-6700H also adds DTS:X Pro (via a firmware update due later in the year), which allows up to 13 channels of DTS:X decoding with speaker configurations such as 7.2.6 or 9.2.4.

A new ‘Pre-amplifier’ mode previously only seen in the flagship AVC-X8500H, disconnects internal amplifiers when the receiver is used as an AV processor and all speakers are powered by external amplifiers. This is only available in the top three models in the X-Series.

Since these are Denon AVR’s, the inclusion of the HEOS multi-room system should come as no surprise and listeners will be able to add the X-series of AV Receivers to an existing network of HEOS devices, such as Denon’s recently released Home speakers, to stream music wirelessly across the network from a variety of free and premium streaming services, including Spotify, Napster, Amazon Music HD, TuneIn, Deezer, SoundCloud, TIDAL. Tidal now supports Dolby Atmos Music so the X-Series AVRs will be an ideal platform through which to enjoy this latest immersive audio format while listening to compatible albums. Apple Music is available via the included AirPlay 2 support and Bluetooth is also supported.

For music lovers with libraries that are managed by Roon, the X-Series AVRs are Roon Tested certified and Hi-Res playback is available via network streaming or hardware connection to the front mounted USB port, which will accept WAV, FLAC, ALAC and DSD 2.8/5.6 MHz files.

The usual range of region dependent voice assistants is available for hands free control with Amazon Alexa on hand to switch inputs for different media players while Google Assistant and Apple’s Siri can be used to adjust the volume, skip to the next track, and more.

Setting the X-Series AVRs up becomes a less daunting proposition with Denon’s Setup Assistant. This takes users through the process of using the included room calibration technology from Audyssey which takes precise measurements and optimizes the receiver’s performance depending on the environment. The AVR-X2700H supports Audyssey MultEQ XT while the rest of the lineup supports Audyssey MultEQ XT32, as well as subEQ HT for independent subwoofer calibration. The Audyssey MultEQ Editor app is available for purchase for those who want more customization options.

Key Features on all 2020 X-Series AVRs

Setup and Ease of Use

The latest X-Series AV receivers will be available at authorized Denon retailers at the below dates.

Are you interested in moving to an 8K-Ready AVR? If so, do the models in the new Denon X-Series of AV Receivers sound like they will fit the bill? Why not let us know what you think in  the discussion thread?

Denon and Marantz AVRs made after May 2021 are HDMI 2.1 bug free