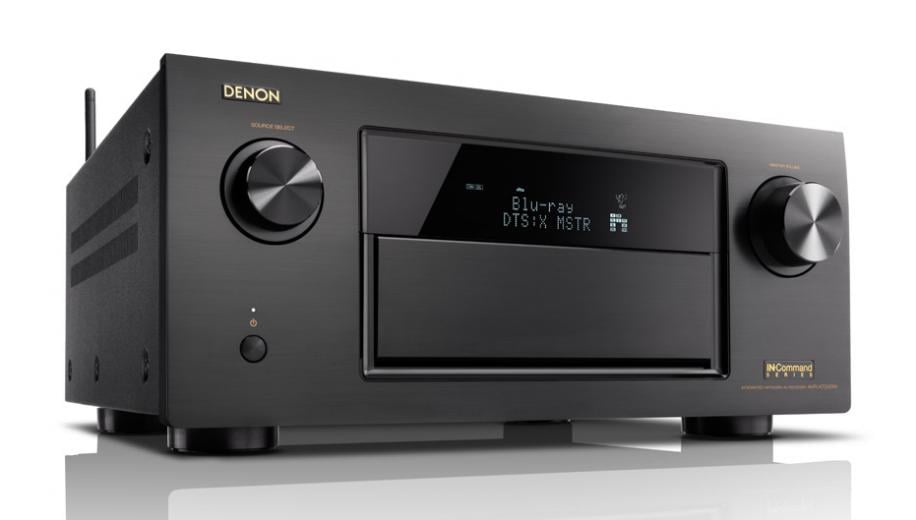 Denon AVR-X7200W AV Receiver (2015)
SRP: £2,499.00
Denon is the first receiver manufacturer to announce a DTS:X firmware update for their premium network AV receivers.
The manufacturer is delivering on its promise to bring DTS:X free-of-charge to its receiver line-up and is yet another milestone after being amongst the first to launch Dolby Atmos enabled receivers and being the first to offer Auro-3D in an AV receiver. The AVR-X7200W(A), AVR-X6200W and AVR-X4200W will be the first models to get a firmware update that adds full DTS:X capability. After updating the firmware, all three AV receivers will be able to run an Audyssey room-equalized DTS:X setup of up to 9.2 or even 11.2 channels, delivering an immersive surround sound experience.

The DTS:X firmware update is scheduled to be released on the 28th of January 2016 for the AVR-X7200W(A), and on the 18th of February 2016 for the AVR-X6200W and the AVR-X4200W, respectively. Although final dates are subject to change until final release. A firmware update notification will appear in the AV receiver’s setup menu if they are connected to the internet, and the “Update Notification” option is set to “On”. Additional updates for current DTS:X-ready models will follow later in 2016.

We have been beta-testing the DTS:X firmware update on the AVR-X7200W that we use in one of our review home cinemas and the results are impressive. Along with the DTS:X demo disc that was handed out at CES back in January we also have the US Blu-rays of Ex Machina and American Ultra, both of which include DTS:X soundtracks. We're running a full 11.2-channel setup and the speaker configuration is identical to the one we use for Dolby Atmos. So far we have found DTS:X to offer the same immersive experience as Dolby Atmos but we will conduct further comparisons over Christmas. One point worth noting is that if you have been using Dolby Surround Upmixing on DTS-HD Master Audio tracks up until now, once you upgrade to DTS:X, you'll have to use DTS's own upmixing algorithm instead, which is called DTS Neural:X.

Our AVR-X7200W also has Auro-3D capability and since the US Blu-ray of Pixels has an Atmos soundtrack and the UK Blu-ray uses an Auro-3D soundtrack, we will have a unique opportunity to directly compare those immersive audio formats as well. In addition we will be interviewing Dolby, DTS and Auro about their plans for 2016 whilst we're at CES in January.
To comment on what you've read here, click the Discussion tab and post a reply.
News Specs Discussion (70)