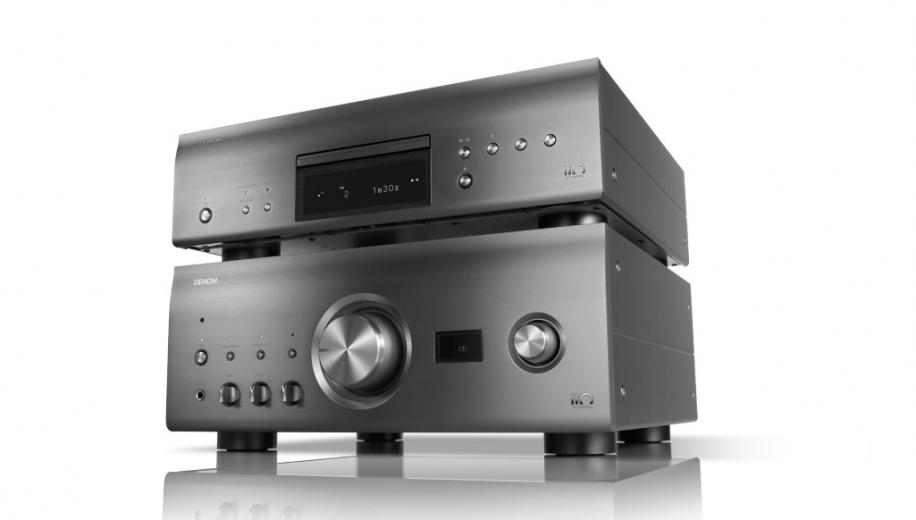 To celebrate its 110th anniversary, Denon is releasing a very special lineup of Hi-Fi products - the A110 Anniversary range which includes; the PMA-A110 integrated amplifier, DCD-A110 SACD player and DL-A110 MC phono cartridge.

The name Denon may have come later but the roots of the company go back to 1910 when the fledgling corporation manufactured the first cylinder audio media in Japan along with the gramophones on which to play them. In recognition of this moment Denon has announced a range of specially crafted 110 Anniversary products which will bring Hi-Fi enthusiasts the opportunity to join in the celebration.

In developing these products, the designers, engineers and sound managers’ financial and creative limitations were removed allowing them full control over the final products.

The 110 anniversary SACD player is able to playback audio data from CDs, Super Audio CDs, as well as DSD (2.8-Mhz/5.6-MHz) files and Hi-Res audio up to 192-kHz/24-bit stored on DVD-R/RW, DVD+R/RW and DVD-ROM discs. Users can also play music files with sampling frequencies of up to 48kHz recorded on CD-R/RW discs.

Once the digital data has been extracted, the new Ultra AL32 processing engine uses up to 32x oversampling of the incoming PCM signal for the most accurate waveform reproduction, before being introduced to the new Quad DAC configuration for conversion to analogue. This quadruple array of DACs uses carefully selected custom-tuned audio parts for the fully discrete filter stage and delivers improved channel separation as well as ultra-low noise and THD levels.

The DCD-A110 has two clock oscillators, one for each sampling frequency (44.1-kHz and 48- kHz) to thoroughly suppress jitter and provide the reference for the Quad DAC operation, ensuring that the digital audio circuitry always performs at its maximum potential.

To further reduce interference and noise, the power supplies for the analogue and digital circuitry are kept separate and use specially designed components co-developed with select manufacturers to deliver a clean, robust and stable supply of power for optimal levels of dynamism and overall performance.

Based on technology available in the SX series of reference Hi-Fi products available in Japan, the PMA-A110 uses Denon’s patented 7th generation advanced Ultra High Current (UHC) topology to deliver 80 Watts at 8 ohms (20kHz-20Hz, THD: 0.07%) of ultra-clean power per-channel and is able to drive even the most demanding speakers and ensure superior linearity at the output stage.

In addition, the Denon engineers carefully constructed the amplifier circuit to secure a frequency response of up to 100kHz, and an electric volume circuit suppresses noise in the amplifier by up to 16dB.

Like the DCD-A110 SACD Player, the PMA-A110 amplifier uses Ultra AL32 Processing, the latest in analogue waveform reproduction technology from Denon, to achieve a smooth waveform that is close to the original signal and the integrated amplifier can support Hi-Res PCM signal input up to 384-kHz/24-bit and DSD up 11.2Mhz (aka DSD256).

Another similarity with the DCD-A110 is the use of the Quad D/A converter which uses 4x Burr Brown PCM1795 chips operating in a quadruple configuration (each channel has two PCM1795 chips working in a differential mode) for the highest accuracy and best signal to noise ratio.

There’s a full range of digital and analogue connectivity including a built-in phono preamp compatible with both Moving Magnet (MM) and Moving Coil (MC) cartridges, and Hi-Res digital audio is available via the jitter-suppressing coaxial, optical or USB-B inputs.

The new DL-A110 phono is a premium Moving Coil design inspired by Denon’s DL-103 cartridge which was first manufactured in 1964 for broadcast studios and was then made available for consumers in 1970, meaning it has been on sale for over 50 years and is the longest-running products to wear the Denon badge.

Each new anniversary edition product features a limited edition silver-graphite finish which will not be replicated on any other product. They also sport engraved 110 Anniversary logos on the front panel and were meticulously tuned by Denon Sound Masters to set them apart from their standard counterparts. All 110 Anniversary products are manufactured exclusively at the Denon factory in Shirakawa, Japan and undergo an extended quality assurance process which includes the issue of a special certificate of authenticity stamped with the approval of Denon’s head engineer, along with a five-year warranty (except the DL-A110 cartridge).

All 110 Anniversary products will be available at authorized Denon retailers.