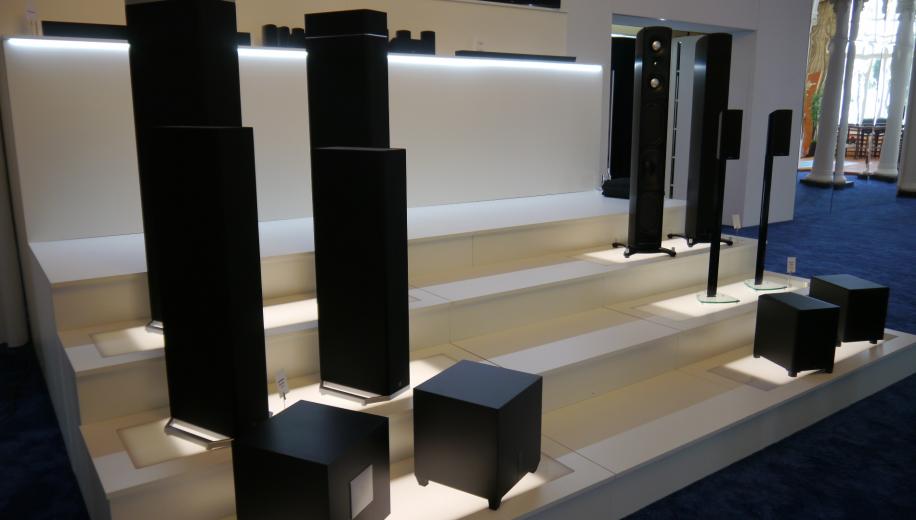 Definitive Technology is a renowned US speaker brand that specialises in a full-range sonic signature and expansive soundstage.
The brand, which forms part of Sound United along with Denon, Marantz and Polk, is based in California where their acoustic engineering team is led by Matthew Lyons, a classically trained musician and founder of the masters in acoustic engineering at Johns Hopkins university. Definitive Technology pride themselves on their use of superior materials, the precise workmanship and uncompromising sound quality. The brand is the number one high-end loudspeaker manufacturer in the US with key patents in multi-polar arrays, pivoting transducers, sonic spatialisation and anti-distortion technologies. Of course this being 2017, Definitive Technology also make high-end soundbars and they had them on show at the recent Sound United European Convention. The first was their W Studio Micro soundbar which is designed to be a less intrusive model without compromising sound quality. The Micro measures a sleek 1.75" in height and features a brushed dark aluminium top panel with four 3" drivers and three 1" aluminium dome tweeters. There's also an 8" wireless subwoofer to deliver the lower frequencies and in the demo we watched the opening bombing run from Unbroken. The Micro did an excellent job of delivering the highly visceral soundtrack and produced an impressively wide soundstage, dynamic effects and deep bass whilst maintaining clear dialogue. We also had a demo of the opening scene of Mad Max: Fury Road and once again the Micro did an impressive job of replicating the film's complex sound design. The Definitive Technology W Studio Micro is available now and costs £899. The other soundbar on show was the W Studio which is a larger model that is also available now but will set you back £1,299. This model uses six 3" drivers and three 1" aluminium dome tweeters along with a wireless 8" active subwoofer. The W Studio includes three HDMI inputs and built-in WiFi, with the option to control the soundbar using the provided remote control or the Definitive Technology app. The W Studio has been designed to deliver a superior performance with both movies and music and it also supports 5.1, whilst the W Studio Micro supports DTS Play-Fi which means you can use this feature to create a wireless 5.1 system using the W7 and W9 wireless speakers if you like. Of course if it's a 5.1-channel (or higher) system that you're interested in then Definitive Technology have numerous different speaker ranges. As a result the company has taken a curated approach to launching speakers in Europe, deliberately choosing the lines best suited to that market. As such they have launched their BP9000 Series of high-end floor-standing speakers which utilises a bi-polar array to increase the size of the soundstage. The speakers also use an aluminium dome tweeter for accuracy and a BOSS front stage array for tighter mid-range focus. There is an integrated 10 or 12” subwoofer with intelligent Bass Control, as well as dual bass radiators to optimise bass extension. The speakers sit on a cast and machined aluminium bass for rigidity with custom milled carpet spikes and floor guides. At the top of the BP9080x speakers, behind aluminium grilles, are built-in upward-firing drivers to add height channels for Dolby Atmos and DTS:X. These built-in upward-firing drivers are only included with the BP9080x floor standing speakers. If however you buy the BP9060, BP9040 or BP9020 floor standing speakers you can remove an aluminium plate at the top and attach the A90 height speaker modules to get the same affect. Other speakers in the BP9000 Series include the CS9080, CS9060 and CS9040 centre speakers and the SR9080 and SR9040 surround speakers. We actually had a chance to hear the BP9000 Series floor standing and centre speakers in action along with the HEOS AV Receiver, a wireless HEOS subwoofer and the HEOS 7 speakers acting as wireless rears. This particular setup was demonstrating the benefits of 5.1-channel gaming but it also gave us chance to hear the BP9000 Series in action, as well as see the synergistic opportunities of having the Definitive Technology, Polk, Denon and Marantz brands within one company.
To comment on what you've read here, click the Discussion tab and post a reply.
News Discussion (13)