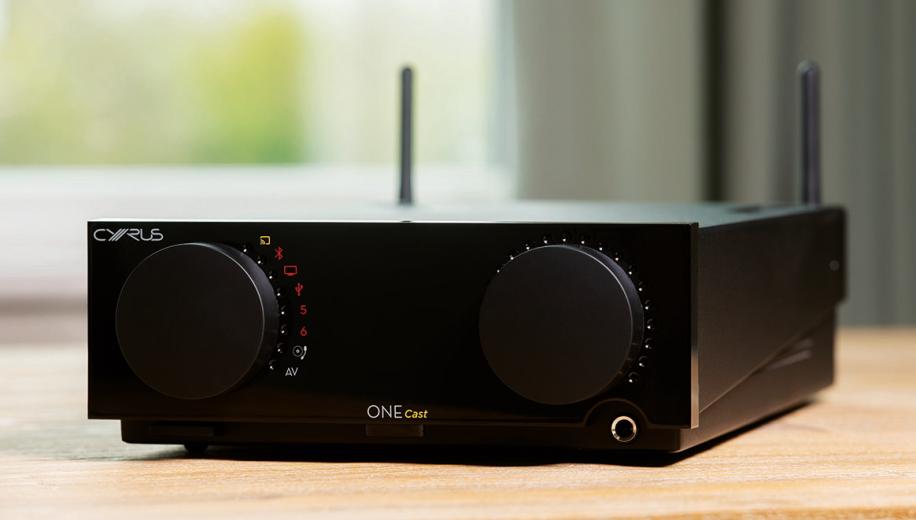 Known for their half rack width designs and 30 years of sound quality recognition, audio specialists Cyrus has unveiled the latest member of its ONE family of products, the ONE Cast network stereo amplifier.

Following on from the company’s ONE integrated amplifier and its Hi-Res and more connected sibling the ONE HD, plus the ONElinear speakers, comes the ONE Cast - a high quality smart amplifier which combines the portability of a smart speaker with the flexibility and audiophile properties of a dedicated Hi-Fi system.

Built around a 100W per channel Class D stereo amplifier, the ONE Cast is claimed to be the first product of its kind and is designed to work with all three major voice assistants, Alexa, Google Assistant and Siri, so sending music from an Apple Homepod, Amazon Echo or Google Home smart speaker to the ONE Cast is easy using a simple voice command.

The ONE Cast can be controlled via all the major streaming apps including Spotify, TIDAL, Amazon Music, Deezer, qobuz and Roon - all without the need for a dedicated, separate control app. Instead, when connected directly to the music service provider, it receives the Hi-Res music files delivering a quality service that exceeds that from high resolution protocols in Bluetooth.

A wireless multiroom setup can be created with multiple instances of the ONE Cast or by integrating it into an existing system that uses other smart speakers, simply assign the device a name and location and listen to your favourite music, radio and podcasts in any room or several at once.

Using AirPlay2, the inbuilt Chromecast and Bluetooth, the ONE Cast can connect wirelessly to almost any device including mobile phones, laptops, and games consoles and its wired connections include a USB input for Hi-Res audio files from a laptop or streaming device, as well as optical and coaxial digital inputs - the onboard ESS 32-bit DAC is capable of handling up to 32 bit/192kHz digital files and DSD 128.
Analogue signals from an existing AV system can be fed into the ONE Cast using inputs that can be configured in a fixed gain mode as well as from a turntable via a built-in Moving Magnet phono stage. There’s also the option of upgrading your TVs sound using the HDMI-ARC input.

Cyrus Audio’s Chairman, Simon Freethy, commented, “This is a world first. A product that marries true Hi-Fi with the usability of a smart speaker. Able to connect wirelessly to all your mobile devices, manage multi-room audio, and still having all the latest wired connectivity options to optimise every source of music in your house, ONE Cast is the most versatile, and powerful entertainment system on the market today.”

If you've used any Cyrus Audio products in the past, let everyone know how you got on with them and whether you think the ONE Cast might be a worthwhile addition to an AV fan's set up.