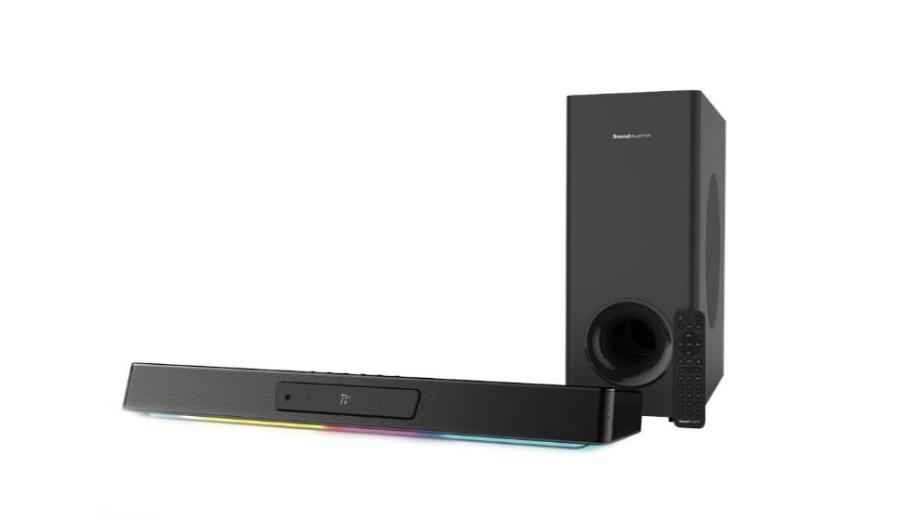 The Katana V2 is a complete redesign from the original Sound BlasterX Katana and has a new sleek form factor, 5.1 playback, delivers 68% more power than before, features improved audio dynamics and transforms the headphone experience with Super X-Fi Headphone Holography. Creative reckons the new Katana V2 delivers an improved experience for desktop and console gamers alike as well as movie fans.

Retaining the tri-amplified design of its predecessor, where each of its 5 drivers is powered individually by a proprietary multi-core DSP controller, the audio quality is further enhanced through improved fabric dome tweeters for more refined highs, while a larger subwoofer is included in the package for a deeper bass performance.

Users who favour the headphone experience will benefit from Super X-Fi Headphone Holography, which recreates the soundstage of a high-end multi-speaker system in stereo headphones. This has been built into the Katana V2 via the integrated Super X-Fi UltraDSP chip which personalises audio according to how individual users hear sound for a fully immersive experience in both games and movies.

The Sound Blaster Katana V2 happily works with PC, Mac, PS5, PS4, Xbox Series X and S, Xbox One and Nintendo Switch and can be customised thanks to the Creative app (both desktop and mobile) which allows users to optimise audio output using various EQ settings and the Acoustic Engine tuning suite. Moreover, the redesigned RGB lighting strip features various illumination mode selections which reactive to the playback content, and settings can be saved as profiles on either the app or the programmable buttons on the remote control.