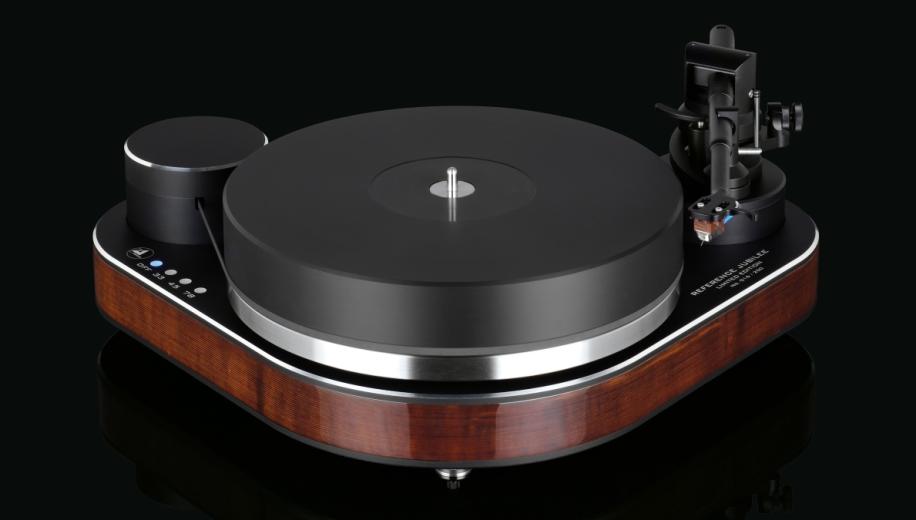 Clearaudio has unveiled its latest turntable, with the Reference Jubilee a refined reworking of it first ever design… but it does come at quite a price.

The original Reference dates back to the 1980s and stood out with a distinctive ‘boomerang’ shaped design, which this updated Jubilee model replicates, complete with a resonance-optimised chassis. It retains an impressively elegant look but, while there are several other similarities to the original, Clearaudio has also incorporated a lot of its latest tech into the Jubilee, along with some new developments.

The older acrylic frame has been replaced with a Panzerholm wood and aluminium build for improved performance. A 6cm platter made from highly damped polyoxymethylene rotates on “a special version” of the company’s frictionless Ceramic Magnetic Bearing. The Reference Jubilee also has a 8.5kg stainless steel sub-platter featuring Clearaudio’s own Optical Speed Control that monitors and regulates against the smallest deviations to ensure a consistently optimum speed stability.

Combining old and new, the company says that while it has made a name for itself with innovative analogue solutions, its design team has also tied that into digital technology "to achieve a new level of precision and consistency of rotational speed". The Reference Jubilee boasts a 12-bit DAC that uses discrete electronics to convert a brand-new air-core 24-volt DC motor into an analogue signal. The digital reference is used “only to compensate for slow movements or drifts due to temperature, oil viscosity, belt friction factors” and so on, with the motor “driven purely by the analogue output stage”. The belt-driven motor housing is ‘decoupled’ from the main chassis using what is described as an “elaborate network of rubber tightropes”.

The Clearaudio Reference Jubilee is available now, priced at £17,500, with all the specs and regional dealers on the company website. That’s not an insignificant sum, which might rule it out for all but the most demanding audiophile, but if it can deliver anything close to value for money through its performance as well as its looks, the Reference Jubilee could be pretty special. Anyone planning on saving up?