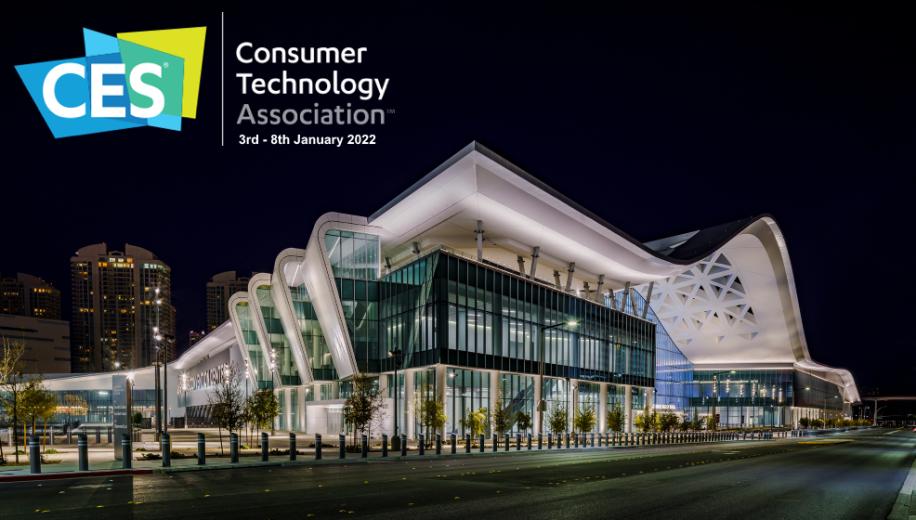 CES is back at the Las Vegas Convention Center from 3rd - 8th Jan 2022, but it’s not quite business as usual with the world’s largest tech show running as a hybrid event for both online and in-person attendees.

Run by the folks at the Consumer Technology Association, the annual Consumer Electronics Show, which is now officially known simply as CES, is the world’s largest technology show and is now in its 56th year.

The organisers have experimented with a number of approaches for the exhibition since CES’s 1967 debut in New York, including holding the event twice annually for a number of years with a winter show in Las Vegas and a summer show in Chicago. In 1998 the format settled on the current single annual exhibition in Las Vegas at the start of January.

CES now has now become the most influential tech trade event in the world and is not only a proving ground for blue sky concepts, breakthrough technologies and global innovations but is where many of the behind the scenes business deals, partnerships and innovations are agreed upon. This in turn ensures manufacturing and distribution to consumers around the globe, so CES’s smooth running is certainly an important factor in getting brands to the high street (online or actual).

The official dates for the 2022 event are the 3rd - 8th Jan 2022. This includes traditional media-only days on the 3rd and 4th Jan followed by four days of exhibitor showcases and conference programming.

How is CES different this year?

As with so many fixtures around the world, 2021’s CES event was affected badly by the Covid pandemic and eventually went ahead as a virtual-only experience. Generally seen as a success in the difficult circumstances, many industry watchers felt it just wasn’t the same without the ‘hands on’ interaction afforded by actually being there, and a return to the show’s spiritual home at the Las Vegas Conference Center as soon as possible was seen as desirable.

CES 2022 doesn’t quite manage that and instead presents a combination of both in-person attendance and the digital experience to afford a choice for how people can attend depending upon their preference.

Over 2100 exhibitors have confirmed a physical presence at CES 2022 including many of the industry’s tech giants, alongside plenty of smaller, newer start up companies. Despite this, the show is expected to be somewhat smaller than its last pre-Covid outing in January 2020 and some exhibitors have scaled back their presence.

For those that cannot be there, there will be live broadcasts and video streams via the CES media hub running alongside the in-person events.

Those industry and media members that do attend will have to follow strict health protocols including proof of full vaccination and regular self testing before entering the various conferences taking place around the complex. There’ll also be requirements for mask wearing, and social distancing will be encouraged through venue layout and conference planning.

Gary Shapiro, president and CEO, CTA said, “In August, we announced that every CES attendee must be fully vaccinated. CES will also provide complimentary COVID-19 rapid tests, onsite at badge pickup locations, as an additional step to protect the health and safety of all our attendees, exhibitors and staff.”

Of course, it’s yet to be seen what effect the escalating omicron variant of the virus will have, if any, on the event but it will be something the organisers are keeping a close eye on.

What’s likely to be announced?

Since CES covers technological innovation in all its many forms, there’ll be a huge range of product announcements, demonstrations and presentations covering new and emerging trends in areas such as the automobile industry, communications, health and fitness, robotics, cyber security and this year’s latest buzztopic, the ‘Metaverse’. Many of the big announcements will be first revealed on Jan 3rd in the opening Unveiled Las Vegas media event. And, as always, there’ll be the CES Awards celebrating innovation.

For AV and home entertainment fans, the most exciting news lies in what the big players have lined up for their TV and audio plans going forward, so let's take a look.

The Chinese electronics giant normally goes big on household appliances and white goods at CES but its TVs shouldn’t be discounted, especially as they deliver plenty of features in the more affordable budget brackets. This year also saw the company’s 100L9 laser TV become available in the UK and it may be this category of display that the company pushes at CES as it will be keen to use its sponsorship of the 2022 FIFA World Cup to attract consumers to a big screen sporting experience.

The Hisense press conference is on Tuesday 4th January at 5pm GMT (12am ET, 9am PT).

LG intends to have a presence at the 2022 show but has stated that it will be putting plenty of effort into its virtual presentations, so it will be interesting to see if the company proceeds with its iconic OLED wave display that normally catches the eye of so many there, especially since the numbers are expected to be lower than normal.

As is LG’s normal approach, it has already hinted at, or even outright revealed, some of the new AV products it has planned for CES 2022. The curtain was only recently pulled back on two new lifestyle TVs, the 65Art90 OLED with a motorised Kvadrat cover, and the battery operated and easily moveable 27Art10.

A refresh is expected of the company’s OLED TV range - likely to take on the ‘2’ mantle (B2, C2, G2 etc) - but whether there will be any leap forward in OLED display technology is not known. The fact that the aforementioned 65Art90 is using an Evo panel hints that the company is wanting to get at least another year out of it - perhaps by expanding it to the popular mid-range C series of OLEDs. What is expected though are two new OLED screen sizes with a heavily rumoured 42-inch at the smaller end and a whopping 97-inch behemoth at the top end - both firsts for LG’s OLED lineup.

Elsewhere, a new flagship soundbar, the S95QR, has been announced with the world’s first upward-firing centre speaker contributing to its 9.1.5 audio channels. If this resides at the very top end, there’s probably 4 or 5 more in the range becoming more affordable with progressively fewer premium features, in keeping with LG’s soundbar releases over the last few years.

Although Panasonic does not release its TVs in North America, instead concentrating on other territories such as Europe and Japan, it has recently used CES to reveal its flagship OLED TVs, with the HZ2000 and JZ2000 featuring heavily in the AVForums Editor’s Choice Awards for 2020 and 2021.

Could Panasonic have squeezed even more performance out of its Custom Professional OLED panel for 2022 or will there be a boost to its TV’s audio, perhaps with a subwoofer included, supporting Panasonic’s strapline encouraging consumers to ‘Feel it all’.

The remainder of the TVs in the lineup are usually revealed later in the year, leaving the company’s official press conference to concentrate on its US product range of kitchen appliances, homeware, personal grooming devices, cameras and headphones.

Meanwhile Panasonic’s audio arm Technics could use CES as an opportunity to introduce new turntables, headphones and amps. This could be especially important for Technics (and audio firms in general) as the 2022 Bristol Hi-Fi Show has been officially cancelled for a second year, reducing the number of opportunities for getting up close and personal with new audio kit - though there’s still IFA in September where new product announcements can be made.

The whole TV industry is pretty convinced that the world’s biggest TV manufacturer is about to publicly reveal its first TVs using sister company Samsung Display’s QD-OLED display technology. As the name Quantum Dot OLED suggests, the screen innovation takes elements from both Quantum Dot displays and OLED technology to deliver a display that promises wide colour gamuts, excellent viewing angles and high contrast ratios. As a former, vociferous anti OLED campaigner, Samsung will have to step carefully as it plants a foot into the OLED TV camp, so expect LG’s PR department to have a field day while Samsung attempts to rebrand QD-OLED without any mention of the last four letters!

No doubt there’ll be more Neo QLED models to follow up the impressive (but expensive) 8K QN900A and 4K QN95A flagships. These were only introduced last year and even the more premium models will be far more affordable than any new QD-OLEDs that may be paraded about. It will also be interesting to see how the company proceeds with its Micro LED TVs. A 110-inch model was due to hit the market in 2021 but things have gone very quiet on that front amidst rumours of production issues; perhaps Samsung will let QD-OLED - or whatever it is called - do all the heavy PR lifting at CES 2022.

Samsung Display is keen to get more partners using the technology on the back of its multi billion dollar investment in the project and Sony has been rumoured to have been conducting due diligence: it seems a decision has been made. The comparison between Samsung and Sony’s approaches to the same technology will be interesting to see, especially if they brand it in different ways.

Expect plenty of innovations and surprises at the press conference. In the past there have been cars driven on stage and Sony suits will hope that a cute robot or two may distract from PS5 stock issues. Talking of the PlayStation, the company is known to be readying its next generation of Virtual Reality headset for use with its consoles but the consensus in the industry is that it won’t be on show at CES 2022 – shame.

There could be more 360 Reality Audio updates, and perhaps more soundbars to follow up the well received HT-A7000 could be on the cards?

Like its domestic electronics rival Hisense, TCL has an extensive smart home product portfolio yet has much to offer with its TVs and displays. The last two CES exhibitions have seen two iterations of its mini LED display technology with Vidrian and OD Zero Mini-LED and the company has promised yet more Mini LED TVs for 2022. Once again, the main issue will likely be a frustrating release schedule that doesn’t see some of the more high end models announced making it to the UK.

The last few years have also seen a regular parade of soundbars too, so it seems reasonable to assume there’ll be a few more models on show in 2022.

TCL’s press conference is on Tuesday 4th January at 2pm GMT (9am ET, 6am PT).

So, as CES attempts a partial return to normality, what else do you think might be announced? Leave a comment and let others know what you’re hoping for.