So what is Dolby Vision IQ? 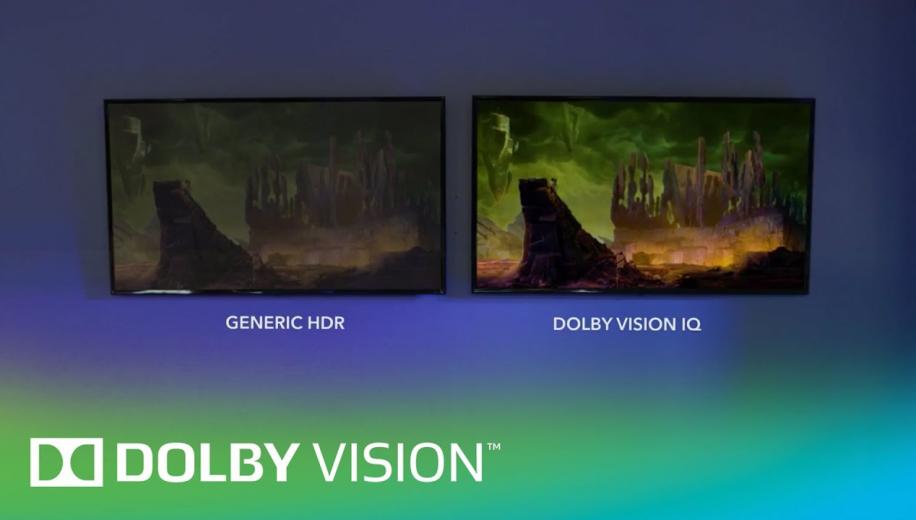 Dolby’s latest innovations in music and imaging show the company taking immersive experiences to the next level.

Dolby Laboratories is using CES 2020 to demonstrate its Dolby Vision IQ and Dolby Atmos Music technologies, with the former unexpectedly popping up on new TVs from Panasonic and LG announced at the show.

In a push to take HDR to the next level, Dolby has introduced Dolby Vision IQ to extend the benefits of Dolby Vision by intelligently optimizing picture quality in any room with any lighting conditions, all without consumers picking up their remote.

Dolby Vision IQ uses the light sensors built into the TV to measure the ambient light in the room and adjust the Dolby Vision dynamic tone mapping accordingly so that details are preserved. It can also inform a TV of the type of content being viewed so any changes lead to an automatic and intelligent modification of settings for the new material. This is all brought about by the use of dynamic metadata in the content datastream and removes any ‘guesswork’ by the TV as to how images should be presented, enabling the TV to make intelligent scene-by-scene optimisations.

Also on show will be demonstrations of Dolby Atmos Music. Once new (or old) material has been remixed and remastered in the new format, listeners are treated to hidden details and given a greater insight into the musician’s musical vision, with instruments, harmonies and melodies able to be placed anywhere in the 360° sound field.

If listeners would like to experience the all-enveloping sound of Dolby Atmos Music, they’ll need an Amazon Music HD or TIDAL subscription to access the content and either an Amazon Echo Studio Smart speaker or their own Android smartphones and tablets (and headphones) for playback.

Dolby sees more than just music, film and TV benefiting from its Atmos technology and plans the continued rollout to video games and sporting events too.

Dolby is seeing its partnerships with both the hardware providers and creative communities grow, such that the likes of Amazon, Apple, Hisense, LG, Skyworth, Sony and more all have compatible devices available at all price points and across all product categories.

At the same time Apple TV+, Disney+, Netflix, Tencent and more are all offering more and more content in the formats including blockbuster films such as Joker and The Lion King as well as new streaming shows like The Mandalorian.

Dolby Labs’ press release is below:
LAS VEGAS and SAN FRANCISCO, Jan. 07, 2020 (GLOBE NEWSWIRE) -- At the 2020 Consumer Electronics Show (CES), Dolby Laboratories, Inc. (NYSE: DLB) will showcase its continued leadership in immersive entertainment through the growing availability of Dolby experiences and its latest innovations in music and imaging.

“Dolby has transformed entertainment for hundreds of millions of people around the world. We are constantly pushing ourselves to find new ways to deliver amazing experiences,” said Giles Baker, Senior Vice President, Consumer Entertainment Group, Dolby Laboratories. “This is exemplified by the growing availability of Dolby Vision and Dolby Atmos enabled devices and content, and new experiences like Dolby Atmos Music where we are redefining how music is created and enjoyed.”

Dolby Vision is more than HDR

Dolby Vision has transformed entertainment through ultravivid picture quality that brings content to life with incredible brightness, contrast, color, and detail. But, the benefits of Dolby Vision don’t stop there.

At CES 2020, alongside LG and Panasonic, Dolby will introduce Dolby Vision IQ – which extends the benefits of Dolby Vision beyond HDR by intelligently optimizing picture quality experiences for viewers in any room at every moment, all without consumers picking up their remote.

Dolby Vision IQ uses Dolby Vision dynamic metadata and the ambient light sensors inside the TV to detect how bright or dark a room is, intelligently displaying every detail of the content so it looks its absolute best. It can also inform the TV what is being watched so when a consumer switches channels, the TV will modify its settings to ensure images are displayed exactly as they should be seen. Without Dolby Vision metadata, TVs are guessing rather than making intelligent scene-by-scene optimizations.

Dolby Atmos Music lets people connect with music, pulling them into a song and revealing what was lost with stereo recordings. Listeners can discover hidden details and subtleties with unparalleled clarity. Whether it’s a complex harmony of instruments placed around a listener, a legendary guitar solo that fills a room, a massive bass drop that washes over the audience, or the subtle breath a singer takes, Dolby Atmos gives music more space and the freedom to unleash every detail and emotion as the artist intended.

Dolby is working closely with artists, record labels, music streaming services, and consumer electronics manufacturers to make Dolby Atmos Music experiences widely accessible. Two of the world’s largest record labels, Universal Music Group and Warner Music Group, are releasing tracks in Dolby Atmos from some of the biggest names in music. This also includes TIDAL’s artist-owners, including JAY-Z, who will mix their catalogs in Dolby Atmos – which are expected to be available in 2020.

Today there are hundreds of millions of Dolby Vision and Dolby Atmos enabled devices in market available at all price points and across all product categories. This includes devices from Amazon, Apple, Hisense, Lenovo, LG, Microsoft, Panasonic, Samsung, Skyworth, Sony, TCL, VIZIO, and many other leading global consumer electronics manufacturers. Many of these partners will announce next generation products powered by Dolby technology at CES this year.

The creative community has fully embraced Dolby Vision and Dolby Atmos. Top streaming services like Apple TV+, Disney+, iQIYI, Netflix, Tencent, Youku, and others are releasing movies and TV series in Dolby regularly. This includes some of the biggest titles released last year – Avengers: Endgame, The Crown, El Camino: A Breaking Bad Movie, The Irishman, Joker, The Lion King, The Mandalorian, as well as the entire Star Wars saga.

Dolby also brings the Dolby difference to other areas such as live sports and games like Gears 5 and Call of Duty: Modern Warfare.

If you’ve experienced any Dolby Atmos Music content, why not let others know what it was like? And what do AVForums readers think of the new Dolby Vision IQ dynamic metadata format for HDR processing? Let us know in the discussion thread.