New kids on the OLED block 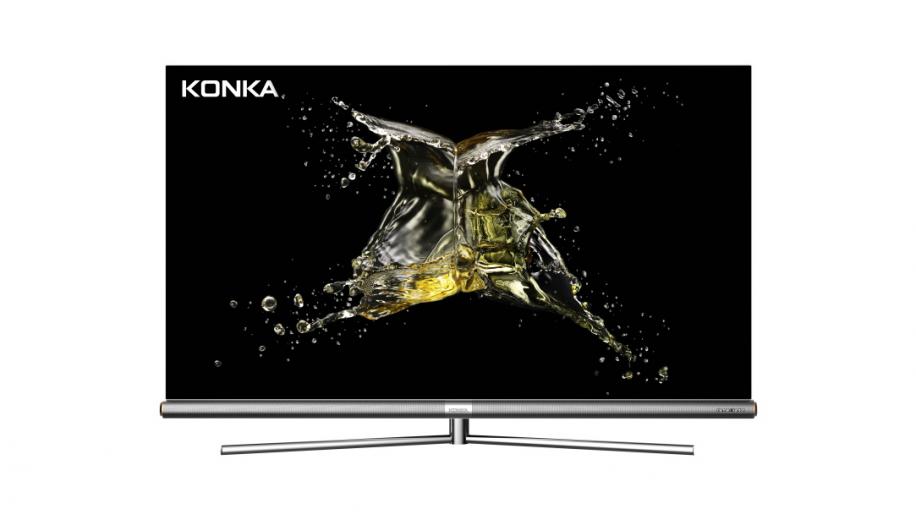 After enjoying the lion’s share of the OLED TV market and the monopoly of OLED panel production via its sister company LG Display, LG Electronics look like they’ll have to face some competition from two Chinese companies - one of which is producing its own panels - starting with product launches in the US.

Chinese TV suppliers have been slowly making their mark on the global TV stage and becoming more familiar in international markets. TCL is now the third (or second depending upon which set of figures is being bandied about) biggest TV supplier in the US while Hisense has made successful moves into the UK market with its range of U7B LCDs and more recently its OB8 OLED TV

Now it’s the turn of two Chinese firms that TV fans might not be familiar with - Konka and Skyworth. Both have spent time and resources building up their profile and products at home and are now looking to global markets with their latest 8K and OLED TVs.

Skyworth
The company’s press conference at CES 2020 was its very first global product announcement and was the platform from which its Q91 8K and W81 OLED TVs were launched globally.
Under the launch banner of ’See The Wonder’, Skyworth’s superthin OLED W81 and W81 Pro were revealed. At just 4.6mm thick at its slimmest point, Skyworth is calling their OLEDs a wallpaper-thin design, let’s hope LG is not in a litigious mood given their own W OLED series is branded the Wallpaper TV. However, in this case, the thin frame also houses a microphone array and a popup AI camera.

Unusually, the W81 Pro comes with a 21-inch secondary screen equipped with the Swaiot OS which shows always-on information such as time and weather, as well as real-time updates including IoT device responses.

Skyworth seems to be pushing this secondary screen scenario as their press release explains, ‘The W81 series can also be paired with the Swaiot PANEL, a new 4-inch or 10.1-inch supplementary display powered by SKYWORTH's Swaiot OS that automatically syncs with the program being played on the main TV. It will be available for purchase separately and will be compatible with other SKYWORTH TVs in the near future’.

Moving away from OLED, the company has also announced the 8K Q91series which is an 8K IPS LED screen which arranges the liquid crystal molecules horizontally, offering a faster response and wider viewing angles up to 178 degrees. Skyworth say ‘it maintains a consistent and clear image from any angle, so the picture maintains colour and optimal brightness’

The TV’s SoC supports 8K decoding up to 60fps and the 8K AI Image Processing Engine uses advanced image recognition and processing technology to improve the contrast, colour and clarity of the picture, while also upscaling lower-resolution content closer to 8K resolution. Dolby Vision is also supported for improved brightness and contrast.

On the audio side of things, Dolby Atmos 2.1.2 is available via an included soundbar which has Skyworth’s Wonder Audio Sky Echo built-in, which moves soundwaves upwards to echo precisely into the listener's ears.

Tony Wang, Chief Executive and President of Skyworth TV, said, "As a leading brand in the TV and smart home industry, SKYWORTH is moving ahead with a focus on building a premium brand, continuous innovation in technology and products, and ushering in the era of big-screen AIoT. SKYWORTH aims to become the brand that leads the consumer electronics market of the future, offering 8K TVs and flagship-level OLED TVs, among other differentiated products, that meet the demands of the growing middle class."


Konka
Fellow Chinese TV manufacturer Konka has previously attempted to get a foothold in the US and returns with a wide range of TV technologies on show including Micro LED, Mini LED TV, OLED TV, QLED TV and LED TV to redouble their efforts in the territory.

As with Skyworth, Konka’s OLED TV - called the X11 - will find the US market a little less crowded than that of Europe, thus offering a potential new option for North American TV fans who only really have LG and Sony to choose from if they have their heart set on an OLED. European OLED fans enjoy a more varied choice which also includes the likes of Panasonic and Philips.

Konka’s X11 series 4K OLED TVs feature a 55- and 65-inch panel which is likely to have been sourced from LG Display, and the X11 design is a ZeroBezel Ultra one with a built-in Soundbar featuring dbx TV Sound. The display is a HiBright UltraOLED panel, so Konka has done some tweaking on the panel, and there’s also a ColorWave™ Ultra Wide Colour Gamut for pure blacks and bright specular highlights.

H3 Series
Elsewhere the TV ranges on offer include QLED and LED models, starting with the entry level H3 Android TV LED models that come in an HD 32-inch model at $200 and a larger 40-inch FHD model at $300. Both have a ZeroBezel design and feature DynaBright dynamic dimming for enhanced dynamic contrast and AccuMotion 120 for clearer images, even with fast motion video. A full range of connectivity includes 3 HDMI inputs which are CEC and ARC compatible.
U5 Series
Stepping up to the mid range 4K UHD LED offerings, Konka’s U5 Series has at its core the XC3™ UHD Engine that includes CrystalView™ Clarity Enhancer, DeepBlack™ Contrast Enhancer and PurePalette™ Colour Enhancer for picture quality. Konka has also incorporated the HiBright™ Pro Backlight for a 25% brighter picture and ColorWave™ Wide Colour Gamut for deeper, more lifelike colours and the DynaBright™, AccuMotion™ 120 from the H3 series is also included, along with 4 HDMI 2.0 Inputs with HDCP 2.2.

The Q7 Series will come in 50" (MSRP $699.99), 55" (MSRP $799.99), 65" (MSRP $1,199.99) and 75" (MSRP $1,999.99) UHD screen sizes.
Scott Ramirez, Senior Vice President, Sales and Marketing, Konka North America, said, “We are very excited to launch three key display technologies, all offering unique consumer advantages and high value. " He added, "In keeping with Konka's mission to provide the best possible combination of quality, technology and value, Konka is providing an incredible line-up of smart TV products that are also a smart choice for both retailers and consumers."

What do AVForums readers think about the rise of Chinese TV manufacturers and the products they are starting to offer international markets? Does it lead to more choice, competition and innovation or a confusing fragmented buying choice?