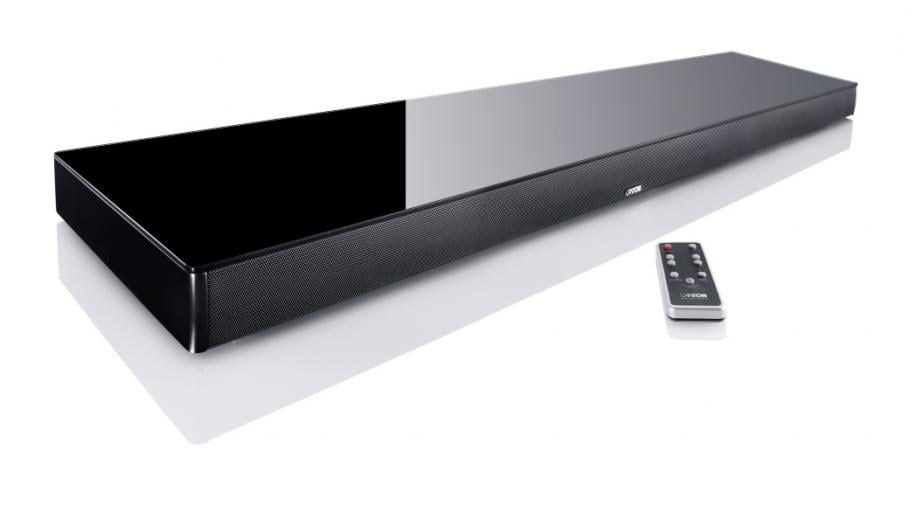 German speaker specialist, Canton’s latest soundbases, the DM76 and DM101 are now available in the UK courtesy of distributor Extertis Unlimited, and mark an increase in size and power over previous models such as the DM50 and DM60.

As TV screen sizes increase in step with consumer demand, so too do the soundbars and soundbases that are designed to accompany them. Thus, Caton’s latest soundbase models are made to satisfy the need for ever expanding audio power to match the TV’s visuals.

Suitable for screen sizes of 40-inches and above, the DM76 measures 725mm x 71mm x 320mm (WxHxD) and features a two-way stereo speaker array consisting of a pair of 50mm midrange drivers and two 19mm fabric domed tweeters. There’s a downwards-firing subwoofer section comprising of four 100mm bass drivers and the entire speaker assembly is driven by a 200W amplifier.

Meanwhile, the larger DM101 takes up 1000mm x71mm x 330mm (WxHxD) of real estate and is more becoming of 50-inch plus screen sizes. The amplification remains at 200W but the greater cabinet size allows for the expansion of the mid-range drivers from two to four (a pair for each channel).

Covering applications from film and TV viewing to games playing and listening to music, the 2.1 stereo playback can be alternated with virtual surround modes – including a music specific surround mode – and features decoding for Dolby Digital and DTS TruSurround.

The sound can be tweaked with the available bass, midrange and treble controls and three EQ presets can make suitable adjustments based on the sounbase’s location. Further modes to enhance the audio experience include a Voice mode to bring extra clarity to speech, Hotel mode which limits the maximum volume for late night listening, and Lip-Sync technology to correctly synchronise audio with the on-screen visuals.

Connectivity is designed to achieve the simplest setup possible with both models connecting to the TV via a single signal cable. There’s also coaxial and digital inputs plus RCA analogue ports for adding CD players, games consoles and other audio equipment. Additionally, there’s Bluetooth support and the Easy Pairing feature ensures music can be streamed from smartphones, tablets and laptops with the aptX format present for catering for high definition audio. Should extra bottom end be required, there’s a subwoofer output too.

Other useful features include IR-learning so the TV remote can be used to control the soundbase - though there is an included remote handset. Plus there’s an Eco mode and auto power down/up in line with the TV.

Canton has made every effort to ensure the DM76 and DM101 look good in the home environment and each shares a shallow profile, lacquered finish and heat treated top surface glass plus blue LED display placed behind the front metal grille.

Taking a different approach to the company’s recent Smart Soundbar 9 and Smart Soundbar 10 which are designed to be placed in front of the TV or wall mounted, the DM76 and DM101 soundbases are built to a high standard from HDF, so as to easily support a modern television up to a weight of 40kg being placed on top of them.