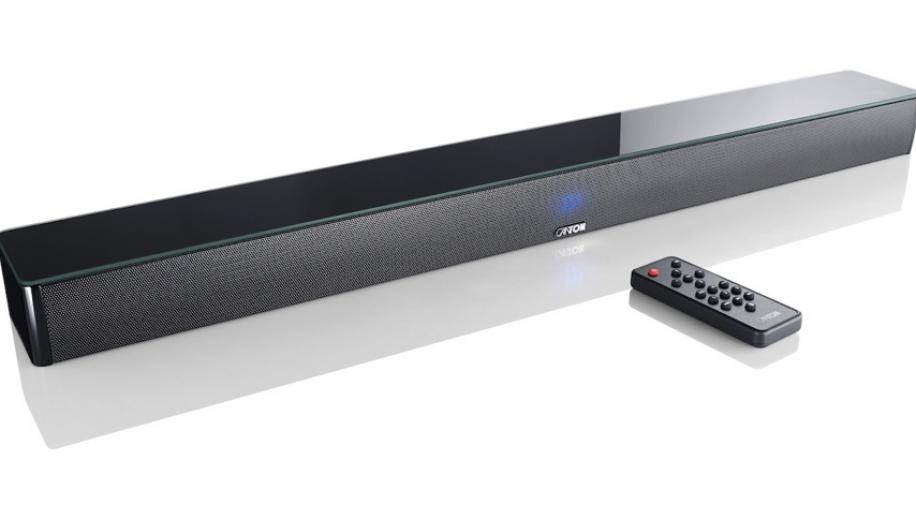 Canton Smart Soundbar 9 Soundbar (2019)
SRP: £699.00
Following on from successful premium quality soundbars and soundbases such as the DM55, DM9 and DM90.3, German based audio manufacturer, Canton unveils their latest product, the Smart Soundbar 9.
The first of a series of next generation soundbars, the Smart Soundbar 9 aims to boost a TV’s audio with its all-in-one speaker solution that can also be part of a multi-channel and multi-room audio system too.

Constructed from reinforced MDF and finished with premium style elements such as heat-treated glass and an integrated metal grille which hides a blue LED indicator display, the Smart Soundbar 9 will fit well into most TV environments and can be wall mounted if required. The overall size measures 890x70x100mm (WxHxD), making it suitable for TVs over 40-inches - and these days, that’s most of them. By connecting the soundbar to the home Wi-Fi network using the built-in Chromecast, audio can be sent (or ’cast’) to the speaker from any device also connected to the network. This enables music to be streamed to the soundbar from any phone, laptop or Mac and from a range of the most popular streaming apps too including TIDAL, TuneIn, Deezer and Google Play Music. There’s native support for Spotify Connect too.

Stepping from music to movies, by adding additional speakers in the Canton Smart Series, a wireless, multi-channel home cinema setup can be easily achieved. Simply add a Canton Smart Sub 8 for the low end and two Smart Soundbox 3 speakers for the surrounds, and a cable free 5.1 cinema surround setup can be enjoyed.

The same approach can be used to create a multi-room music system too and starting with the Smart Soundbar 9 provides a good initial point for future upgrades. The Chromecast setup is straight forward and is controlled by the Google Home app for iOS and Android. Any firmware upgrades to keep the soundbar’s specification up to date are taken care of by automatic updates over the wireless network.

Compatible with Dolby Digital and DTS Digital surround formats, the soundbar supports Hi-Res audio up to 24 bit/96kHz and uses three equaliser presets to tailor the audio depending upon the location of the bar. Synchronisation of on-screen audio and video is performed by Lipsync technology.

Although both 2.4GHz and 5GHz WLAN connections are supported, using the included aptX Bluetooth to connect to compatible devices can be used to ease the congestion on a home network if the kids are all playing computer games when you want to relax to music.

Away from wireless connectivity, physical I/O includes three HDMI inputs and one HDMI output which are all HDCP 2.2 compliant enabling transfer of 4K UHD video and the HDMI out port supports Audio Return Channel (ARC). Along with a stereo RCA input, there are two digital inputs, one optical and one coaxial and, finally, a dedicated subwoofer output is provided. A host of additional features make using the Smart Soundbar 9 simple and convenient including, the ability to use another remote to control the bar rather than the one it comes supplied with and automatic shut down when the TV is turned off, along with an Eco Mode. A menu system displayed on the TV means settings can be easily adjusted.

Distributed by Exertis Unlimited, the Canton Smart Soundbar 9 is available in the UK from late July in a choice of black or silver at an RRP of £699.

Looking for an upgrade to your TV sound without going down the Dolby Atmos, DTS:X route? Would the Smart Soundbar 9 suit the job? Let us know what you think.