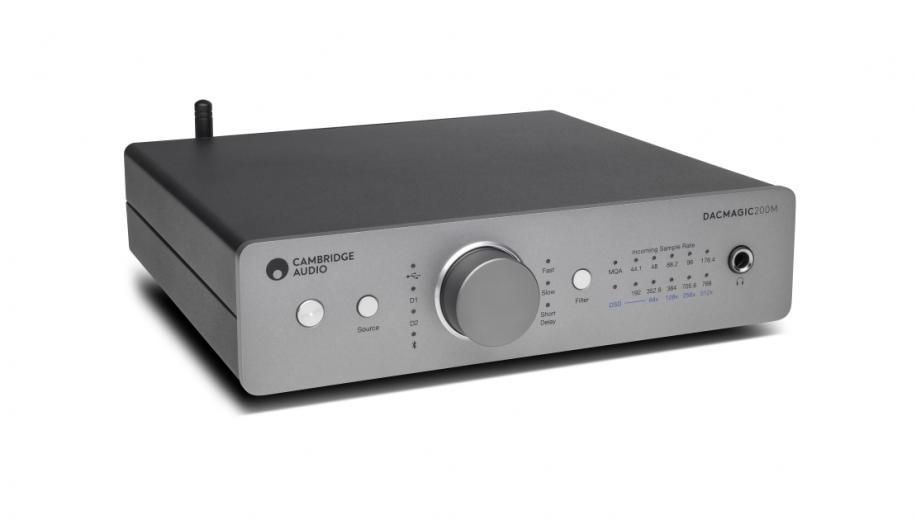 Cambridge Audio is convinced its top of the range DacMagic 200M will bring a performance boost whether listeners are using it with their favourite music streaming service or their CD collection on an existing home audio system, courtesy of a range of features and hardware measures.

Designed for digital audio from the ground up, the DacMagic 200M features dual ESS Sabre DACs at its heart. Able to handle PCM and DSD signal inputs at a higher resolution than before – up to 32-bit/768kHz (PCM) and DSD512 natively - this represents a step up from the previous generation DacMagic Plus.

Since the twin DACs use a dual mono configuration, the left and right channels are processed separately, resulting in reduced distortion and improved dynamic range. This way digital files from any source - whether it’s on a CD, streamed from your smartphone, or stored on your laptop -  are converted to analogue audio with all the detail and dynamics intact through the DacMagic 200M.

There are also three pre-set filters to help reduce noise generated by the digital-to-analogue conversion process, with each filter offering a different sonic option depending on the source material.

The DacMagic 200M represents Cambridge Audio’s first product that natively supports MQA files. This ensures that music is heard the way the artist intended as details from the recording are captured in the MQA encoding and revealed upon decoding. MQA support is becoming increasingly prevalent across audio devices and Tidal music streaming service, for example, uses MQA technology to deliver its ‘better than CD-quality’ TIDAL Masters streams.

Helpfully, notification that you are listening to an MQA music file/stream will take the form of a front panel LED lighting up.

As a headphone amplifier, the 200M uses traditional class A/B amplification combined with a reduced output impedance on the 6.3mm headphone socket which leads to more power, less distortion, less noise and tighter audio control when listening via headphones.

There are also both balanced and unbalanced analogue output connections, making it easy to connect to all types of existing audio systems.

Moreover, integrated Bluetooth aptX support means you can wirelessly deliver digital files from your smartphone or tablet, too.