Using separates to bring music together 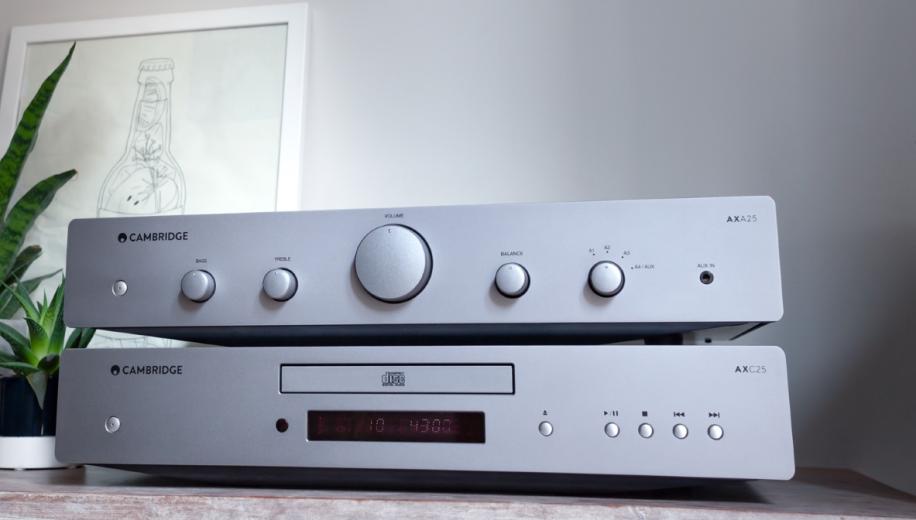 Cambridge Audio AXA25 Stereo Amplifier (2019)
SRP: £229.00
Cambridge Audio reveals its AX series of Hi-Fi separates. With an eye on affordability as well as performance, the range will include AXC25 and AXC35 CD players, the AXA25 and AXA35 integrated amplifiers and the AXR85 and AXR100 stereo receivers.
Designed and engineered in the UK to capture the ‘Great British Sound,’ the AX series taps into 50 years of audio expertise and brings some of the innovation found in the company’s CX and Edge Hi-Fi ranges to music enthusiasts, showcasing, as Cambridge Audio claims, the artist’s true sonic intentions. Available in mid-June with a SRP of £229 and £299 respectively and a Lunar Grey and black finish, these gapless players both feature a high quality digital to analogue converter (DAC) for producing the analogue sound signal from the audio data contained on the CD.

Multiple file formats, including MP3 and WMA on a variety of disc types such as CD-R, CD-RW and CD-ROM, are supported in order to access music libraries stored in a variety of formats.

Both units feature a single RCA output and the more expensive AXC35 also hosts a dedicated digital output enabling recording of a CD to another digital format or even the addition of a standalone DAC for further processing.

This pair of integrated stereo amplifiers both feature four analogue RCA inputs and an RCA output for recording purposes. There’s also a USB port which hosts 5V 500mA of power to support a Bluetooth receiver and a front panel mounted 3.5mm stereo input.

At £299, the AXA35 is more expensive than the AXA25, which costs £229, but it boasts a power output boost from 25W to 35W, has a front panel display screen and 6.3mm headphone port, and sports additional connectivity in the form of a phono stage input.

Also clad in the AX range’s Lunar Grey and black colour scheme, the AXA integrated amplifiers are available from mid-June.

The AXR stereo receivers use their respective power outputs (85W and 100W) to drive two stereo speaker zones and feature plenty of connectivity in the form of three analogue RCA inputs and a phono stage for turntables with moving magnet cartridges. Additionally, there’s RCA and subwoofer outputs on the rear plate. On the front panel, both models have a 3.5mm auxillary input for hooking up music players and there’s also a 6.3mm headphone socket for quiet listening moments.

Streaming music from a smartphone, tablet or computer is possible courtesy of the in-built Bluetooth receiver and both models have an FM/AM radio with 30 presets for favourite stations.

As well as the power increase to 100W, the AXR100 has additional digital inputs in the form of two optical and one coaxial ports.

Available from July, the AXR85 costs £349 while the additional power and connectivity options of the AXR100 will cost £449.

Jacks of all Trades - The Rise of Multifunction High End