Older Cabasse speakers can be added into the mix too 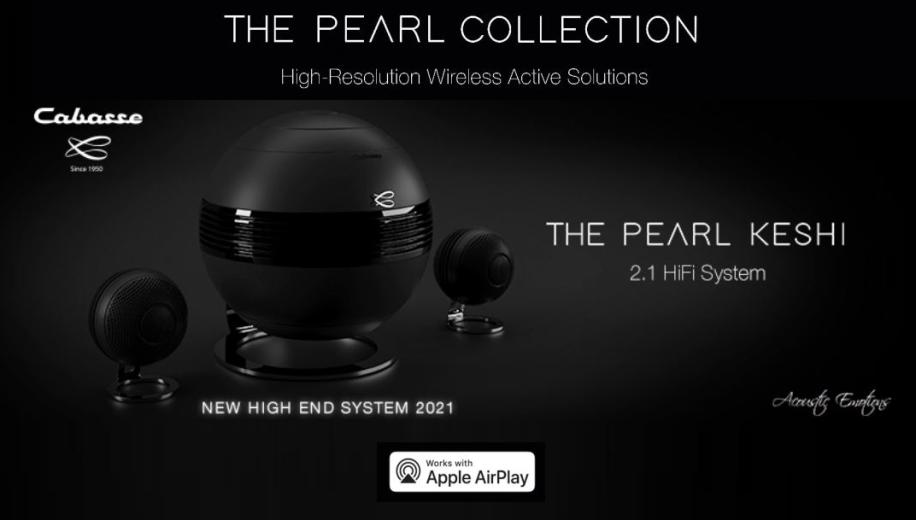 French speaker firm Cabasse has announced that all the members of its PEARL speaker Collection now feature Apple AirPlay technology.

The entire PEARL collection of speakers, including the recent 2.1 Pearl Keshi system and the Pelegrina, which marked the company’s 70th anniversary, are now compatible with AirPlay following an automatic update which commenced on 6th Dec 2021.

The full 9-model, high-end PEARL range, which also includes the Pearl, the Pearl Akoya and the Pearl Sub, were born out of many years of R&D based around the Sphère speaker as a reference. Packed with advanced technologies and acoustic innovation, the speakers now add Apple’s wireless AirPlay connection platform which means users can now visualise their speakers in the AirPlay interfaces of their Apple products as long as a minimum of iOS 13.4 (or later) is used on their Apple devices.

Cabasse has gone one step further too; as well as making AirPlay available to owners of the more recent Pearl Collection, the company offers its customers with older connected Cabasse products the option to get in on the AirPlay act too. Thus, all models from the Cabasse streaming (WiFi) range (Stream 1, Stream Source, Stream Amp, Stream Bar, Stream Base and Stream 3) now also support AirPlay as long as the older speaker is paired (via the StreamCONTROL application) with a recent speaker from The Pearl Collection. This ensures greater longevity from these legacy Cabasse devices.

Streaming audio files with Apple AirPlay from an iPhone or iPad to a Cabasse product is easy, simply go to the Control Centre of your device and tap on the AirPlay icon. Users with a Mac can also stream audio to Cabasse speakers by selecting AirPlay in the settings options in System Preferences/Sound so that audio streams from iOS applications such as Apple Music.

It’s also possible to select one or more Cabasse products to stream the same audio to all speakers using AirPlay technology. And if two Cabasse speakers are in the same room, grouping them together in the Cabasse StreamCONTROL application, rather than using the AirPlay multiroom feature, means it is possible to enjoy stereo listening.