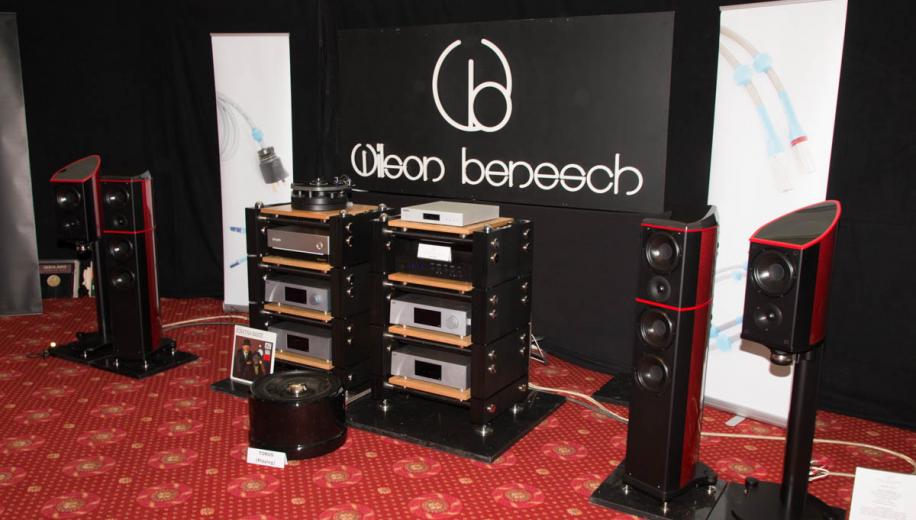 In the run up to the show, the elements seemed to be doing their best to prevent Bristol from happening. Storm Doris saw parts of the city closed to traffic and road closures on the M4 meant many exhibitors struggled to get their rooms fitted on time.

In some ways this is a metaphor for the show itself. By rights the Bristol show shouldn’t be a significant date on the calendar, coming as it does so soon after CES and choosing a location that can’t easily be described as central. Despite this, the show retains the unusual ability to surprise us with new product. As mentioned in Steve's AV show report, for multichannel fans pickings remained on the thin side but the outpouring of two channel equipment was considerable and not solely at higher price points either. The Leema room featured a system largely comprised of new equipment. The Quasar all-in-one system takes the company’s strengths in amplification and decoding and combines it into a one-box system that offers UPnP streaming, Tidal and Spotify Connect support, Bluetooth, digital and analogue inputs all mated to a hefty 150 watt class AB amplifier. We’ll be looking at one of these shortly for review and it has the Moon Neo ACE firmly in its sights. The company also took the opportunity to demo the Sirius music server. This is a Rip NAS that can either be ordered as a straight server or with a DAC board built in to become more of an all-in-one digital source. Leema has taken the sensible move of partnering with established business Innuos to provide the guts of the Sirius and ensure that they are part of an established base of products. Also all new is a trio of speakers from Spendor. The A1 standmount and the A2 and A4 floorstanders are the most affordable speakers in the company’s line up. The A1 is almost identical to the S3/5R2 that we reviewed last year but comes in some different finishes to match the rest of the range. The A4 was on demonstration in one of Spendor’s rooms and sounded very good indeed. At a rather loftier price point (£13,000 in fact), the new Kudos Titan 707 arguably turned in my favourite performance of the whole show. A smaller version of the Titan flagship (although not exactly compact), the 707 uses a number of Kudos design points and unusually, it features the required connectivity to work with the Exakt system from Linn. Although this wasn’t in use at the show, it managed to sound seriously good without it. Acoustic Energy has had a quiet few years but have decided to celebrate their 30th anniversary with an all-new version of the evergreen AE1 standmount speaker. For the first time, the AE1 has gone active with a 200 watt amplifier built into each unit. Unlike a number of active speakers hitting the market, the AE1 does without digital inputs and Bluetooth and instead has a straightforward choice of RCA and XLR connections. Acoustic Energy says it is the perfect partner for the various digital preamps hitting the market and it’s hard to argue with the sentiment having heard them. One of the more significant announcements from a company was from Audioquest. Owners of the Dragonfly Red and Black units will be able to update the software and have an MQA compatible product. This makes the Black the cheapest MQA compatible product yet and will considerably boost the number of MQA capable units in the market. I’ll be updating a Dragonfly presently to test it. Chord Electronics had a considerable presence at the show with a booth devoted to showing off the new Chord Poly and Hugo 2. The Poly remains a fascinating proposition for existing Mojo owners as it promises to turn their DAC into a capable and flexible portable audio player and UPnP server. In their main room, Chord was giving their Blu2 CD transport and DAVE DAC an airing and the resulting system sounded extremely impressive – if you are still invested in CD, there’s no doubt that this pairing is one of the most technically accomplished CD players ever made. Another DAVE was doing a fine job of helping Q Acoustics make the UK debut of their Concept 500. The £3,600 flagship takes the existing Q Acoustics design principles and turns them up to 11. The triple layer Gelcore cabinet uses resonators and specialist bracing to provide as inert a structure as possible to allow the drivers to perform unencumbered. When I listened to the prototypes late last year, they impressed from the outset and their performance at the show was a further indication that these are a sensational pair of speakers. Of course, it wouldn’t be a 21st century Bristol show without a healthy dose of analogue. One of the most significant set of announcements came from Rega. While they didn’t launch a complete new turntable, they have added a third moving coil cartridge to their range which is by far, the most affordable yet. The Ania will sell for £500 and Rega has also launched a dedicated moving coil phono stage to partner it. A new external PSU for the Planar 3 has also been announced and you can now also order the Planar 2 and Planar 3 in red – and if you don’t you need to have a serious talk with yourself. Neither was this the only natty finish on display. Elipson has announced a special finish for the Omega turntable and some spec improvements. The carbon fibre skin looks superb and the addition of the arm lift will make it an easier device for newer users to get used to. Finally, the Ortofon OM10 cartridge has been replaced by the 2M Red for a further boost in performance. The price has climbed to £700 but this is an impressive one-stop turntable. Of course, if you have an extra £600 in your pocket, the Technics SL1210GR was making its UK debut and like our very own Phil Hinton, it’s hard not to feel a slight sense of want when confronted with it in the flesh. The GR makes some economies in material and design over the more expensive G model but still looks and feels fantastic. I look forward to getting my sticky hands on a review sample. If you were looking for an amplifier to go with these turntables, Cyrus was keen to show off the talents of their ONE integrated amplifier. This compact but flexible unit was being demonstrated with a wide variety of speakers from teeny Neat IOTAs to rather pricey Maarten Audio speakers from Sweden to show that it is well up to the job of working with any of them. Visitors were also given the chance to try the headphone socket with a selection of cans to further show that the ONE can do everything you need it to. No less flexible and sounding very good indeed was Quad’s Artera One all-in-one system. The Artera has UPnP streaming, CD support, digital and analogue inputs and a very pleasant industrial design. Quad clearly has some confidence in the capabilities of the Artera as they were demonstrating it with their electrostatic speakers which are relatively demanding speakers and extremely revealing at the same time. The most impressive all-in-one systems at the show came from German manufacturer AVM. These are being brought into the UK by PMC and comprise some extremely sophisticated designs that take the all-in-one to some very lofty price points. All support UPnP streaming with Tidal and Qobuz support and a bespoke control app. The fit and finish of all of the models on display was truly exceptional and these represent a very interesting addition to the UK market. The single most exquisite item on display however was tucked away in the Wilson Benesch conservatory room. Carbon Fibre has become a popular material for making tonearms but even in this increasingly busy field, the Nanotube One stands out. Made from a carbon weave that includes carbon nanotubes, the result is an arm that is staggeringly stiff and strong but also beautifully proportioned and designed. I make no bones about the fact that I want one – badly.

I’m not blind to the lack of vision at the Bristol Sound & Vision Show and I believe that a degree of rebalancing is needed for it to become more successful. This being said, the very fact that manufacturers choose a regional show in the UK to launch products has to be seen as impressive and I look forward to getting hands-on with a number of these products over the coming months.