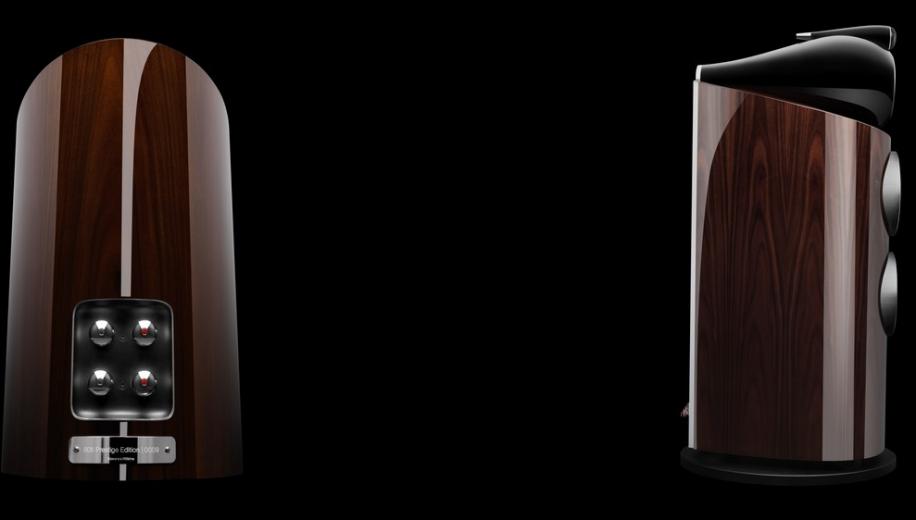 The high-gloss Santos Rosewood finish is prepared by hand by skille Bowers & Wilkins craftsmen at the company’s factory in the UK. Crafting each cabinet, as you would imagine, is labour intensive, with the finishing process requiring 40% more manufacturing time than a standard 800 Series Diamond loudspeaker. Bowers & Wilkins highlights the distinctive Santos Rosewood veneer used on each loudspeaker with thirteen coats of lacquer to deliver a rich and desirable finish (they do look lush), with a deep, luxurious colour and distinctive grain pattern that is intended to make each loudspeaker a unique piece of art.

Hear the sound, not the cabinet. That’s the principle behind Bowers & Wilkins separate head units – a feature they introduced when they first launched the original 800 Series speaker in 1979. Constructed from a single piece of aluminum, braced with internal radial fins and with a raised, slimmer profile, the turbine head is almost totally inert, producing a sound that’s free from cabinet coloration, reduces internal resonance and aids sound dispersion Vibration is the enemy of good sound. To minimise vibrations, you need components that are as stiff as possible. For the 800 Series Diamond, Bowers & Wilkins created their stiffest tweeter enclosure yet. The tweeter assembly for the new range is housed in a solid piece of aluminium, while an improved gel decoupling system isolates the tweeter from the effects of cabinet resonance.

Thanks to its unique stiffness-to-lightness ratio, diamond makes the perfect tweeter material, says B&W. Developed especially for the 800 Series Diamond, the Diamond Dome tweeter pushes the break-up frequency threshold to a claimed 72kHz. Following eight years of intensive development, the patented Continuum cone avoids the abrupt transitions in behaviour that can impair the performance of a conventional drive unit

By using computer modelling and a new syntactic core material, Bowers & Wilkins were able to produce a cone of varying thickness, with maximum stiffness where it’s needed most. This optimised shape means the cone displays pistonic behaviour further up the audible range. Instead of a flat-fronted speaker with a curving back, the 800 Series cabinet has a front and sides formed of one continuous curve, held together with a spine of solid aluminium. Fewer joins make for a stiffer, more inert structure, and a curved front means less baffling around the drive units. So sound dispersion is improved, and cabinet reflection is reduced.

A great speaker needs a rock-solid foundation. By moving the crossover from the plinth to the main body of the speaker, Bowers & Wilkins created a base for the 800 Series Diamond that’s more stable and resonance-resistant than ever. Replacing the original open-box design, the new plinth is constructed from a solid piece of aluminium. This improves stability by lowering the centre of mass and counter-balancing the weight of the turbine head.

In total, the process to create the Santos Rosewood finish takes around over four weeks. The stand mount 805 Prestige Edition costs £5500 per pair; the larger floor standing 802 Prestige Edition is £19,500 per pair. Both luxuriously finished models are available via Bowers & Wilkins specialist 800 Series Diamond retailers