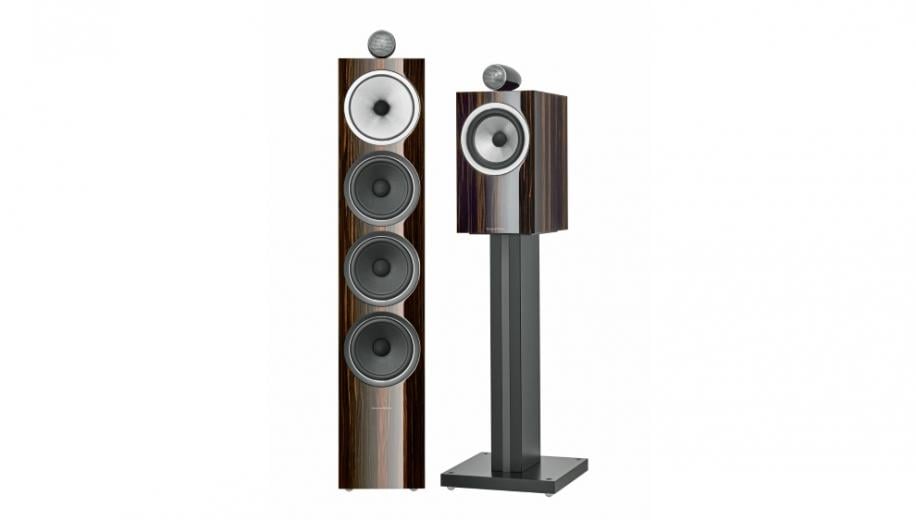 Like a rite of passage or a graduation ceremony, Bowers & Wilkins puts forward its best-of-the-best for Signature Status and the two newest graduates are from the 700 Series range of speakers. Congratulations and come on down to receive your award, the 705 and 702.

This month will see the floorstanding 702 and stand-mounted 705 from Bowers and Wilkins’s 700 speaker series ascend to Signature status with new upgrades to the crossover design and cabinet finish.

When the 700 series of speakers was launched in 2017, it already benefited from technologies that had first been introduced in the high end 800 Series Diamond, including the Solid Body Tweeter-on-Top assembly, unique Continuum cone drivers and Aerofoil Profile bass drivers. Once these were combined with 700 Series specific features such as the Carbon Dome tweeter and optimised rigid cabinets, the 700 speakers' looks and performance credentials were set.

Now, the 705 and 702 models have received additional enhancements to facilitate their Signature status.

The use of specially treated and upgraded bypass capacitors, increased heatsinking capabilities and an upgraded LF capacitor on the bass section of the 702’s crossover adds to the already impressive resolution, openness and spatial retrieval on offer.

Additionally, Signature stature bestows an upgraded finish that combines exotic real-wood veneers with sustainably-sourced supplies in the guise of an eye-catching new Datuk Gloss ebony-coloured veneer with a distinctive grain that is individual to each pair of speakers. Nine layers of finish, including primer, base coat and lacquer, add to the pristine workmanship.

The arresting finish is highlighted by the bright metal trim rings around the mid/bass and midrange cones plus the bright, silver finished tweeter grilles that Signature models sport. There's also a unique identity plate on the rear panel which gives the 705 and 702 speakers the final Signature stamp of authenticity.

Carbon Dome Tweeter:
﻿Created for the speakers in the 700 Series in a bid to bridge the performance gap between the 600 Series’s Alumnium Double Dome and the Diamond Dome found in the 800 Series Diamond, the Carbon Dome Tweeter manages exceptional stiffness and resistance to distortion by using two sections. Firstly, a 30µm aluminium dome coated in carbon by Physical Vapour Deposition and secondly a bonded 300µm carbon ring that has been profiled to match the form of the main dome.

Solid Body Tweeters:
﻿The Tweeter-on-Top design of all previous Signatures products is brought to life in the 705 and 702 Signature models by using the Solid Body Tweeter design found in the 800 Series Diamond speakers. Rather than a more usual hollow zinc housing for the tweeter, the same shape is milled from a solid piece of aluminium into which the tweeter assembly fits. Acting as a heatsink for the dome, the solid housing weighs over 1kg and is exceptionally inert with a less resonant structure. It also features the same decoupling mechanism and acoustically transparent grille design as the 800 Series Diamond.

Continuum Cone:
﻿Also trickling down from the 800 Series Diamond to the 705 and 702 Signature speakers is the Continuum cone midrange driver. Constructed from woven composite, Continuum provides highly controlled break up behaviour with its optimised and controlled flexibility and thus avoids the abrupt transitions that impair the openness, detail and neutrality of a conventional drive unit.

Midrange Chassis and Decoupling:
﻿The 702 Signature uses a Fixed Suspension Transducer (FST) midrange drive unit that uses an FEA (Finite Element Analysis) optimised aluminium chassis, This chassis has a stiffened form which is enhanced by a tuned mass damper on its front face which dampens residual resonances and gives a cleaner midrange presentation.

In addition, the midrange decoupling system takes the one used in the 800 Series Diamond and simplifies it to deliver an improved midrange openness.

Aerofoil Bass Cone:
﻿The 702 Signature manages to achieve a notable uplift in bass performance by using a new implementation of the 800 Series Diamond Aerofoil cone which now uses a composite structure of inner and outer skins filled with EPS.

Let us know in the discussion thread if you’d be tempted to update your current speakers with either of Bowers & Wilkins latest star graduates.