Featuring the return of a legend 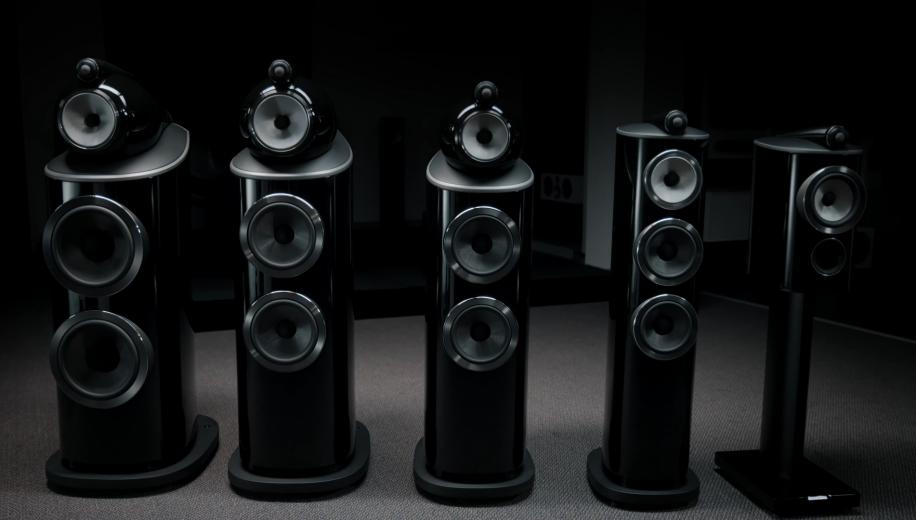 As befits a range as significant and longstanding as the 800 Series, the new speakers share a great deal of design thinking with their predecessors but represent the results of analysing the preceding range and correcting perceived weaknesses. To this end, all models combine a diamond tweeter with a Continuum cone that, in the floorstanders, is then augmented by ‘Aerofoil’ bass drivers. Within these basic statements come a flurry of detail changes.

The tweeter housing that allows for decoupling from the rest of the cabinet is still machined from a single piece of aluminium but it has now increased in size and length and the mounting system that connects it to the cabinet manages the neat trick of being more robust and more effective at the business of decoupling at the same time. The midrange driver now makes use of a new spider that is designed to manage the twin virtues of being stiffer and stronger than the older fabric type but lighter and less prone to causing unwanted air movement at the same time. This is only fitted to the midrange versions of the Continuum cone so the two way 805 D4 that uses this driver for bass response uses the older system. For the larger models that place this driver in the metal ‘turbine housing’ arrangement that gives the 800 Series such a distinctive aesthetic, the metal enclosure features a new damping arrangement to further reduce audible interference.

The models that do without the turbine housing - the 805 D4 and 804 D4 - still have some significant revisions. In the preceding generation, these smaller members of the range did without the ‘reverse wrap’ cabinet of the more expensive models but this has now been changed so that all models use this principle. This means that all 800 Series cabinets are formed from sheets of birch ply that are combined with sheets of adhesive and formed into a horseshoe shape by a press. The rear of the cabinet is cut back and sealed, leaving a rear ‘spine’ that houses the crossover rather than forming part of the cabinet volume itself. Within the cabinets, the ‘Matrix’ bracing that adds stiffness has been revised to include metal in key areas to further increase its effectiveness.  As you proceed further up the range, the more metal is present.

Alongside improvements made for performance, Bowers & Wilkins has been hard at work ensuring that the new speakers are still as convenient to use as a high end speaker can be. The 805 D4 gains a new stand that makes use of a four bolt mounting system that secures the speaker more effectively. The 804 D4 floorstander has been the recipient of a considerable redesign that reflects its dimensions being something of a sweet spot for Europe. It now has a downward firing port and plinth arrangement to complement the reverse wrap cabinet. The larger floorstanders are equipped with a plinth that is fitted with castors for moving the speaker into position (and that now allow the speaker to rotate on the spot) and that has spikes that drop past the castors to fix the speaker in place. The plinth itself is now built with a constrained layer damping system that ensures it is mechanically quieter than before.

One of the biggest stories though is at the top of the range. The 800D3 is not being replaced by an 800D4. Instead, Bowers & Wilkins has resurrected the iconic 801 prefix to created the 801 D4. True diehards like myself will be slightly disappointed to learn that the unique ‘Audiophile washing machine’ design of the original 801, with its 15-inch driver has not been repeated. Instead, the 801D4 uses a pair of ten inch Aerofoil drivers to complement the tweeter and midbass. Bowers & Wilkins argues that the premise of the 801 is a level of performance that meets or exceeds a certain set of performance criteria rather than one that has a specific set of drivers in it. There is also the equally valid argument that the use of two ten inch drivers is more room friendly than a single 15.

The idea of a thirty thousand pound speaker needing to be ‘room friendly’ might strike some people as absurd but it reflects the unique position of the 800 Series in the market. This is the most widely produced high end speaker by far; indeed it is possible to argue that it is the only mass produced high end speaker. The factory tour that was included as part of the launch preview showed 800 Series speakers being built in quantities that are quite unlike any other speaker in this category. There is an almost self-fulfilling loop that the greater quantities being sold leads to refinements in the design and implementation that in turn lead to more units being sold.

There are some cosmetic changes too. The existing finishes of gloss black, satin white and rosenut wood are retained but there is now also a walnut finish too. A detail change that is unexpectedly effective is that the white and walnut finishes now leave the tweeter housing unpainted and the result looks fantastic. The larger floorstanders feature a new aluminium plate between the top of the cabinet and the turbine housing that is leather trimmed. Meanwhile, the smaller models replace the full length grilles with smaller driver specific covers.

During the pre launch visit, we were given some time to listen to the new 805D4 and 804D4. The former was in a smaller demo room and was being used with a Marantz duo (reflecting the new ownership of Bowers & Wilkins). ‘Small’ or not, it was still an impressive space to fill and they did an excellent job of sounding large but controlled and as fast as you would hope a standmount design to do. The standout was the 804 though. On the end of Rotel Michi electronics, the increase in extension and scale was palpable and this was delivered without any appreciable sluggishness. All signs point to this being a formidable range of speakers.

On sale from 1st September, the models are;