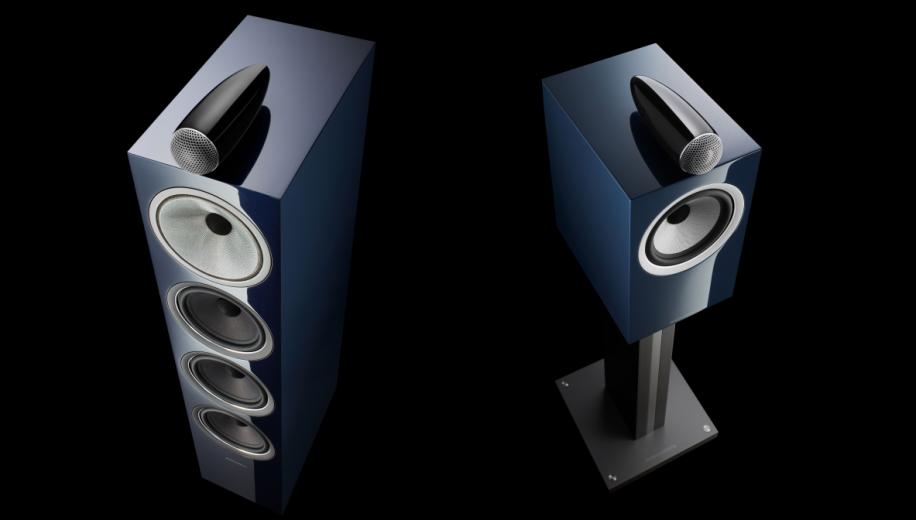 Bowers & Wilkins has unveiled new versions of its 705 Signature standmount and 702 Signature floor standing loudspeakers which will both be available in a Midnight Blue Metallic finish.

The 700 series of speakers was launched by the British audio specialist in 2017 with the 705 standmount and 702 floorstander models attaining Signature status last year and released in a Datuk Gloss ebony-coloured veneer.

The new finish was inspired by the Midnight Metallic Blue paint offered on the iconic Bowers & Wilkins' Nautilus speaker, and the new 702 and 705 Signature are finished in seven coats of metallic-finish paint and lacquer to produce a lustrous finish. As with the 2020 Signature models, the speakers are detailed with bright metal trim rings around the mid/bass and midrange cones plus bright, silver-finished tweeter grilles. Both models also have a Signature identity plate to their rear panel, adding to the exclusive air surrounding the speakers.

The acoustic engineering on board continues to include Carbon Dome tweeter technology for both speakers. The Carbon Dome tweeter bridges the performance gap between the Aluminium Double Dome used in the 600 Series and the Diamond Dome used in the 800 Series Diamond and delivers stiffness and resistance to distortion without undue mass, possessing a first break-up point of 47kHz.

The instantly recognisable Tweeter-on-Top design is present in both the 702 and 705 Signature models and uses the trademark Solid Body Tweeter technology which sees the housing milled from a solid mass of aluminium to provide a stiffer and less resonant structure and which weighs in at over 1kg to aid inertness. The mass of the tweeter body also serves as a heatsink for the dome.

The Bowers & Wilkins’ Continuum Cone midrange driver, first seen in the flagship 800 Series Diamond speakers are a presence in both the 705 and 702 Signature editions with the woven composite giving highly controlled break-up, for a more transparent and detailed midrange.

The 702 Signature floorstander uses a Fixed Suspension Transducer (FST) midrange drive unit that uses an FEA (Finite Element Analysis) optimised aluminium chassis and adds three updated Aerofoil Profile bass cones. These are found in the 800 Series Diamond and use a composite structure of inner and outer skins filled with a lightweight core of EPS for an uplift in bass performance.

Both Midnight Blue Metallic loudspeakers feature specially treated and upgraded bypass capacitors sourced from Mundorf, larger heatsinking and, in the case of the 702, an upgraded LF capacitor on the bass section of the crossover.

AVForums has reviewed both the 705 Signature and the 702 Signature in their Datuk Gloss iterations.