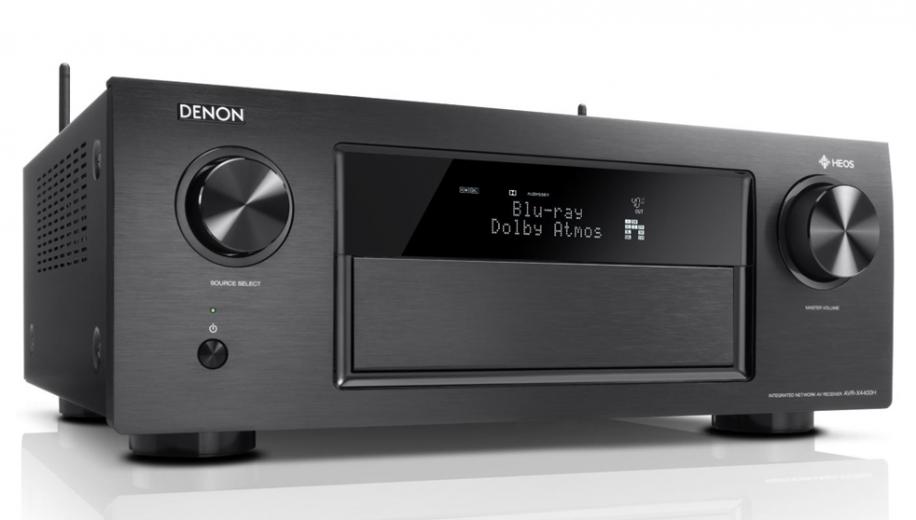 It's been a year of consolidation in the AV Receiver market with manufacturers struggling to find new features to add to their 2017 line-ups.
Although all the major manufacturers have launched new ranges of AVRs, with most now supporting immersive audio, multi-room networks, 4K and High Dynamic Range (HDR), it's getting harder to tell one generation from the next. As a result manufacturers have been looking to increase power, add more channels, include more immersive audio formats and support new features like Hybrid Log-Gamma (HLG), Dolby Vision and Enhanced Audio Return Channel (eARC) in an effort to keep their 2017 ranges relevant. We've even seen an attempt to completely reinvent the AVR in this rapidly changing audio and video world. So here's our list of the best AV receivers that we reviewed this year. Unlike all the over AV receivers on this list, the Denon HEOS AVR looks very different and is the result of a specific brief to deliver a lifestyle product with a simplified appearance that won't frighten less tech-savvy consumers. That means almost no front panel controls, aside from the volume dial, and no display but it also means no onscreen display and an over-simplified remote. However this is largely academic because the AVR has been designed to be set up and controlled using the highly effective HEOS Multiroom App. This simplified approach also applies to the rear connections which sensibly eschew most legacy inputs in favour of HDMI. Setting up and controlling the AVR is very easy thanks to the HEOS remote app and there's the option of a wired 5.1-channel system or one with wired front channels and wireless surround channels and subwoofer. A bit of careful setup is required but even a complete novice should have the HEOS AVR up and running in minutes. The wireless configuration doesn't result in any perceivable latency between the wired and wireless speakers and the AVR is equally as effective as part of a HEOS multiroom system. It also sounds great with both movies and music, making the Denon HEOS AVR a great all-rounder, and for those who are either looking for a less intimidating AVR or like the idea of having wireless rear speakers, it's a great choice. The second AV receiver on this list is also a Denon but with a rather more traditional design that uses the classic AVR layout. The Denon AVR-X4400H has already won our Editor's Choice Award for Best AV Receiver, so its inclusion on this list shouldn't come as a surprise. The X4400 might use a traditional design but it's attractive, well made and comes packed with every feature imaginable including 9 channels of built-in amplification, Dolby Atmos, DTS:X and Auro-3D out of the box. In addition, you also have the option of adding two more channels of amplification and two subwoofers to run a full 7.2.4 immersive audio system. The X4400 includes 8 HDMI inputs and 3 HDMI outputs, all of which support 4K/60p 4:4:4, High Dynamic Range (HDR10, HLG and Dolby Vision), Wide Colour Gamut (Rec.2020) and HDCP 2.2. Thanks to a firmware update planned for next year, the receiver will even support the Enhanced Audio Return Channel (eARC) feature. If that wasn’t enough the X4400H supports the same HEOS system and app as the HEOS AVR, which means it can form part of a multiroom network. The set up is easy, the remote well designed and the performance is excellent with both movies and music, making the Denon AVR-X4400H a great choice for those looking for superior sound quality, features and value. The Yamaha RX-A3070 is their latest flagship AV receiver and, as such, it includes just about everything you could imagine in an AVR. The design is the same as last year but it remains attractive and well made. There is an extensive set of connections at the rear, including HDMI inputs and outputs that support 4K/60p, Rec.2020 and HDR (HDR10, HLG and Dolby Vision). The receiver supports both Dolby Atmos and DTS:X with nine built-in channels of amplification, WiFi, Bluetooth, a host of other features and extensive file support. It also forms part of Yamaha's MusicCast multiroom system, which is easy to set up, very flexible and highly effective. The lack of backlighting on the remote and the less than intuitive menu system remain annoying but, that aside, set up is relatively straightforward and there is an included microphone for the YPAO sound optimisation feature. The A3070 is a class act, delivering an assured performance with plenty of detail and dynamic range. It's impressive with Dolby Atmos and DTS:X but also very adept with two-channel music, making it a useful addition to any MusicCast system. The Yamaha RX-A3070 is a great all-round performer and thus deserving a place on our list of Best Buy AV Receivers for 2017. The two previous receivers on this list need additional amplification to run a full 7.1.4 immersive audio setup but that isn't the case with the Marantz SR8012. It's a single-box solution with 11-channels of built-in amplification, that is beautifully designed and very well made. There's a comprehensive set of connections with HDMI inputs and outputs that support 4K/60p, 4:4:4, 3D, Rec.2020, HDR10, HLG, Dolby Vision and HDCP 2.2. Marantz even plan to upgrade the HDMI connections to eARC with a firmware next year. In fact the SR8012 is absolutely feature-packed with support for Dolby Atmos, DTS:X and Auro-3D, which means you can run a full 7.2.4 setup right out of the box. Set up is easy thanks to Audyssey MultEQ XT32 and there's the Audyssey MultEQ Editor App for tweakers. The Marantz AVR remote app is excellent and combines seamlessly with the HEOS app, allowing you to run a full multiroom network that includes the SR8012. Marantz even plan to add DTS Virtual:X support and Amazon Alexa voice commands via firmware updates. The SR8012 delivers classy performance with movies, producing a nuanced and immersive soundstage around which effects are delivered with precision. There is also a nice musicality to the Marantz SR8012, allowing the it to double as an excellent amplifier for 2-channel sources and making it a great all-rounder for those with the necessary budget.
To comment on what you've read here, click the Discussion tab and post a reply.
News Discussion (33)