Make the most of your walls 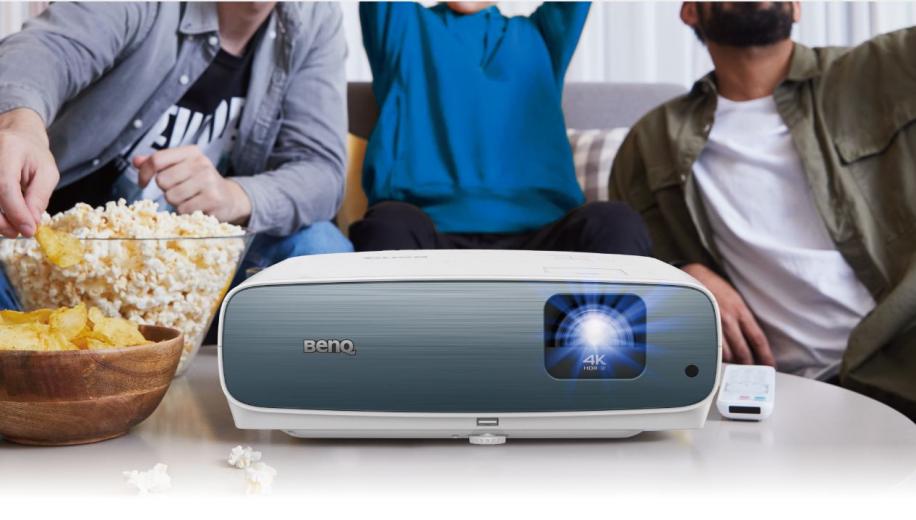 Display specialist BenQ unveils four new projectors, two from its Home Cinema range -  the TK810 and TK850 - and two from the company's Gaming portfolio - the TH685 and TH585.

At a time when new home entertainment and gaming hardware could well provide some much needed distraction from the tedium of enforced isolation, Taiwanese multinational BenQ has released four new projector models that could well be a panacea to any increased boredom levels.

Falling under the Home Cinema bracket are the 4K Smart HDR TK810 and TK850 projectors, coming in at £1,159 and £1,479 respectively, which provide an opportunity for viewers to experience large screen entertainment in the home environment, with the TK850 delivering a 100-inch image.

Featuring a range of features optimised for projection, the TK810 is bright and compact and utilises True 4K UHD with its 3840 x 2160 resolution.

BenQ’s Motion Interpolation (MEMC) technology has been included which adjusts for motion blur by using advanced motion estimation and compensation technology. This is especially effective when watching fast-paced content such as sports or action movies.

The TK810 also proves itself capable of connecting to a wide range of devices via either wired or wireless methods, including laptops, tablets, smart phones, Blu-ray players, consoles, streaming devices or flash drives, so you can access content from virtually anywhere. Not only that but it comes with an alternative app store for Android TV called Aptoide TV, and there's a 5W chamber speaker so you can use the projector anywhere without worrying about having to hook it up to a permanent sound system.

Stepping up on a few fronts, the BenQ TK850 adds to its 4K 8.3 million pixel image with HDR-PRO technology which delivers enhanced tone mapping, true 4K resolution and superior HDR brightness for your content, be it sports or films. Furthermore, it also adds a second 5W speaker.

The TK850 offers alignment with keystone correction, so you can perfectly project from a variety of places either within a room or move to a different room entirely.

Offering the same huge screen experience for solo and multiplayer games as the TK810 and TK850 do for movies, the TH585 and TH685 feature images sizes of 100- and 150-inches respectively for their Full HD 1080p resolution.

The TH585 is the more affordable of the pair and costs £559. It features built-in audio and an enhanced game mode to bring what BenQ describes as ‘superior colour accuracy’, ‘greater clarity’ and ‘visual precision’, which all combine with a 16ms lag time to help give you the upper hand against your foes.

A brightness of 3500 ANSI Lumens means games can be played in more brightly lit rooms and flexible throw distances, digital lens shift and vertical correction mean you can make adjustments to play almost anywhere regardless of room properties.

No matter which console you favour, the more expensive TH685, which costs another £90 at £649, creates a superior gaming experience with its gaming mode and adds HDR compatibility along with a 120Hz refresh rate and a reduced input lag of a mere 8ms.

Gaming audio is enhanced by BenQ’s CinemaMaster Audio+2 technology and the company promises 15,000 or more hours of lamp life.

What do you think if the price and specs that BenQ’s new projectors offer? Let us know in the discussion thread.