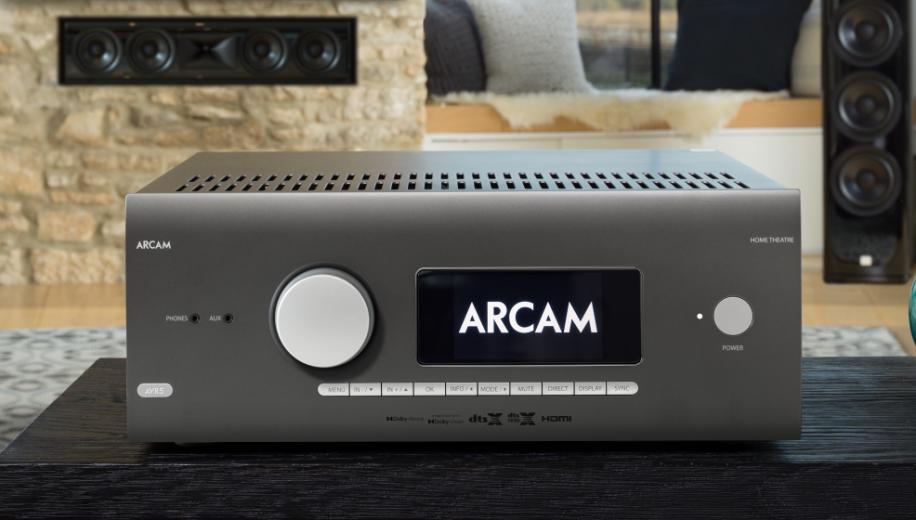 The AVR5 delivers 12 channels of Dolby Atmos and DTS:X decoding, supports Dolby Vision up to 4K and is equipped with numerous streaming features including AirPlay2, Bluetooth aptX HD and Chromecast.

Arcam’s AVR5 slots in at the more affordable end of the Cambridge company’s HDA range of AV receivers, using the same Class A/B amplification as its bigger siblings the AVR10 and AVR20 and sitting underneath the Class G powered, range-topping AVR30.

Its seven channels of amplification are based upon those in Arcam's stereo amplifiers, and deliver a musicality not necessarily heard from other AV receivers, making the AVR5 suitable for music as well as blockbuster movies the company says. It can natively decode 12 channels of immersive audio from Dolby Atmos (with upmixing from Dolby Surround) and DTS:X (with upmixing from DTS:Neural:X) to serve up a musical and cinema-like experience from a 7.1.4 speaker array.

Dolby Vision and HLG high dynamic range content delivered by streaming services such as Disney+ and Netflix plus games consoles like the Xbox Series S/X and compatible Blu-ray players is supported, and the AVR5’s HDMI sockets enable 4K HDR passthrough while enhanced ARC support makes it possible for a suitably equipped TV to send back lossless audio.

Like its stablemates, the AVR5 will be able to take advantage of an upcoming upgrade to support  HDMI 2.1 for completely uncompressed 8K video on all inputs and outputs.

The Arcam AVR5 uses the same ESS ES9026PRO DACs as used in the AVR30 and likewise achieves exceptionally low noise. A custom designed in-house linear supply provides power and is capable of sustaining a total power consumption of 1.5kW.

When the movie-watching is done and it’s time to listen to music, the AVR5 can draw on numerous sources including streaming from smartphones and tablets using Apple AirPlay 2, Bluetooth aptX HD, Google Chromecast built-in and Spotify Connect. The latest 2021 version of the Harman MusicLife UPnP app enables playback and control of the AVR5 on Android and iOS and facilitates internet radio, music streaming, and podcast listening.

While the other products in the HDA AVR range come with Dirac Live Room Correction software, it’s optional for the AVR5 and the system is primed and ready to go as soon as a licence has been purchased and the software downloaded to a Mac or PC.

Nick Clarke, Senior Director, Global Engineering Luxury Audio, commented, "ARCAM understood that there was a strong requirement below the existing offering." He went on, "The AVR5 perfectly meets this need by offering a comprehensive and configurable feature set along with the legendary sound quality ARCAM is well known for, allowing the end user or installer to build a home cinema to be proud of."