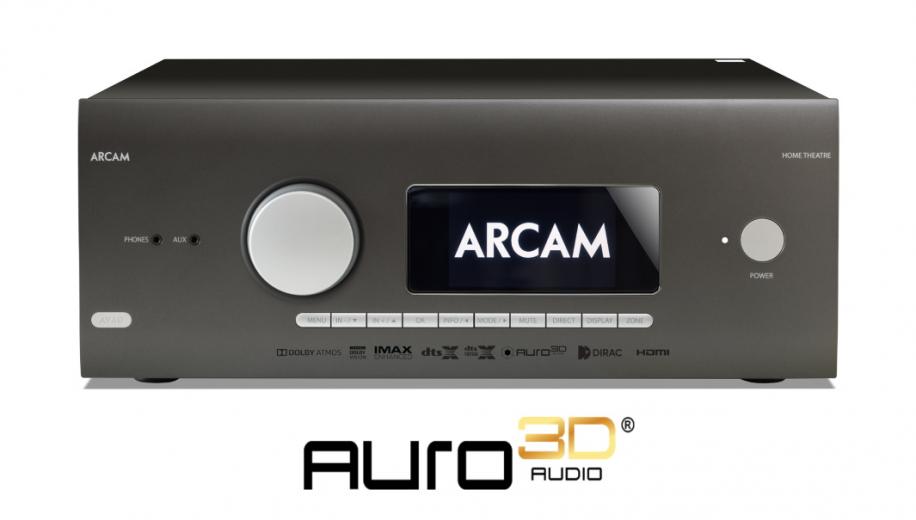 Harmon owned Arcam has announced the addition of Auro-3D technology to its most recent range of AV receivers including the AVR10, AVR20 and the AVR30 along with its AV40 processor.

Sitting in the shadow of Dolby Atmos and even DTS:X, Auro-3D could be seen as the forgotten immersive audio format. However, it features on AV receivers from Marantz and Denon and also high end offerings from Trinnov, Datasat and Lyngdorf.

Auro-3D adds a height layer to the sound stage to create immersive three dimensionality to surround the listener. All that’s needed is an updated AVR10, AVR20, AVR30 or AV40 model, a Blu-ray player and an Auro-3D configured speaker setup - recommended layouts range from 9.1 to 13.1.

The height information that is captured during recording is mixed into a standard 5.1 surround PCM carrier, and during playback the originally recorded height channels are extracted from this stream. Thus, Auro-3D can be delivered by any normal Blu-ray player over HDMI.

The Arcam implementation of Auro-3D combines the Auro-Codec decoder as well as the Auro-Matic up-mixer which means an immersive audio experience can be accurately reproduced from any audio source, including mono.

Rudy Van Duppen, CEO of Auro Technologies said, “Auro Technologies is thrilled to see AURO-3D enabled on the newest ARCAM AV receivers. This announcement signifies a milestone for the expansion of Auro-3D into more devices and ARCAM’s commitment to expand the availability of AURO-3D.” He added, “AURO-3D brings to customers the truest to real-life immersive experiences for the Home.”

Since the height layer in Auro-3D is designed to mimic the way the human ear has evolved to hear sounds elevated and off to the side, rather than from directly above, the format doesn’t require ceiling mounted drivers. Instead, height speakers are added above the existing speakers to enable the Auro-3D decoding to add the height layer directly above at 30 degrees.

Auro-3D is already available on Blu-ray discs and the catalogue is growing. However, since the Auro-Matic up-mixer is able to convert ‘non Auro’ content such as mono, stereo, or 5.7/7.1 surround signals into the Auro-3D format, whatever content the listener chooses will benefit from an immersive 3D transformation.

If you own one of the Arcam AVRs or the AV40 processor, why not let us know in the discussion thread how you get on with the firmware upgrade to Auro-3D.