Lossless music to our ears 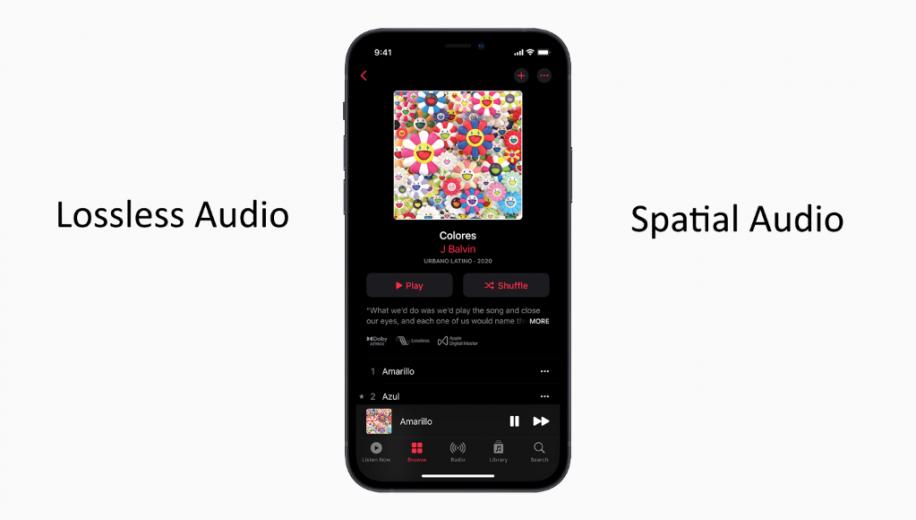 Apple Music subscribers will have access to both lossless audio and Dolby Atmos content from June, the company has revealed.

In a move that was increasingly expected, Apple has taken the lossless audio ball and run with it as the Cupertino company has announced that, from June and at no additional cost to its Apple Music subscribers, its music library will be available in high quality lossless quality.

And, in a case of ‘not only but also’, Apple Music will additionally be launching Spatial Audio with Dolby Atmos which will deliver thousands of tracks in 3D surround-sound format for a fully immersive musical experience for the listener.

Both of these features will be coming in June for Apple Music subscribers at no extra cost and includes those on family and student plans.

Although it didn’t give a specific launch date in June, The Verge reports that the initial catalogue of lossless audio tracks will be 20 million, before the remainder of the 75 million strong song library is added in the ALAC (Apple Lossless Audio Codec) format by the end of the year. Also confirmed to The Verge by Apple is that music purchases will not be in lossless quality, 'nor will there be any way to upgrade owned tracks to lossless with the paid iTunes Match service'.

The starting point for Spatial Audio will be in 'the thousands' to begin with, covering a wide range of artists and genres such as hip-hop, country, Latin, pop, and classical. Apple intends to add new Spatial Audio content on a continual basis as more and more creators embrace the format during the mixing process.

Apple has been laying the foundations for a move to Spatial Audio with its more recent hardware and by, default, Apple Music will automatically play Dolby Atmos tracks on all AirPods and Beats headphones with an H1 or W1 chip, as well as the built-in speakers in the latest versions of iPhone, iPad, and Mac.

To help introduce subscribers to Spatial Audio, Apple Music will be creating specialist Dolby Atmos playlists and suitable albums will display a Dolby Atmos badge on the detail page for easy discovery.

Kevin Yeaman, Dolby Laboratories’ president and CEO, said, “Today marks the introduction of Dolby Atmos on Apple Music - a new music experience that is transforming how music is created by artists and enjoyed by their fans.” He went on to add, “We are working with Apple Music to make Spatial Audio with Dolby Atmos widely available to all musicians and anyone who loves music.”

To start listening in lossless audio, subscribers will need to turn it on in 'Settings - Music - Audio Quality' in the latest version of Apple Music.

There will be three separate options to suit a variety of connection situations such as cellular, Wi-Fi or download. Starting at 16 bit / 44.1 kHz CD quality for slower connections, the quality increases to 24 bit /48 kHz, which is playable natively on Apple devices, before topping out at Hi-Res 24 bit / 192 kHz, which will need the largest bandwidth and requires external devices such as a USB-DAC.

Apple joins Amazon Music HD, Qobuz and Tidal in providing a lossless audio option though it is the first to do so at no extra charge to its subscribers.

In response to Apple’s announcement Amazon reacted by dropping the charge for Amazon Music HD, instead making it free to Amazon Music Unlimited subscribers.

Apple now presents a conundrum to Spotify, which is planning to release its own Hi-Fi tier later in the year. Although details were scarce from Spotify regarding pricing and quality options (CD quality was the only option mentioned) Apple has well and truly laid down a lossless audio marker in the sand and is daring Spotify to step over.

Let us know what you think about Apple’s announcement and what this might mean for the streaming music sector.