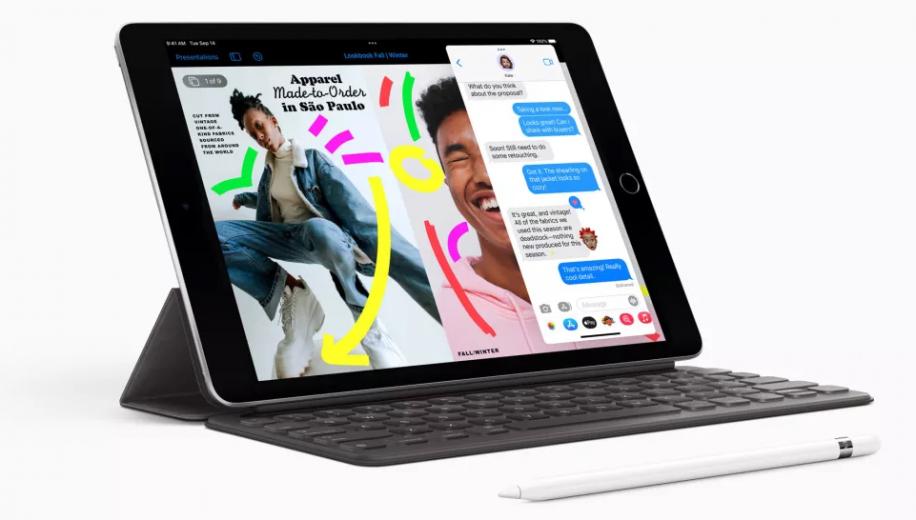 Apple has rolled out new tech in the form of the affordable but powerful iPad 2021, a new large-screen iPad mini and the new Series 7 Watch.

It wasn’t all about the latest iPhone 13s at Apple’s California Streaming Event, as Tim Cook and cohorts introduced a steady stream of new, updated models of old favourites.

First up was the latest iPad which sees last year's A12 Bionic chip updated with the A13 version, resulting in a device that’s 20 percent faster than its previous iteration and up to 3x faster than the nearest Chromebook rival.

With the biggest upgrade being internal, the overall size and shape of the new iPad 2021 remains unchanged such that compatibility with the growing stable of iPad accessories such as cases and keyboards, including third party addons, remains in place. The new iPad can now also be used with the 1st generation Apple Pencil and Apple Smart Keyboard.

The 10.2-inch Retina Display is a True Tone display that adjusts the screen’s white point to the colour temperature of the room for a more comfortable viewing experience.

The front facing camera has had a performance upgrade and is a 12MP, 122° Ultra Wide camera with improved autofocus in low light. Moreover, it now supports the iPad Pro’s Centre Stage feature which automatically and dynamically adjusts the framing of a scene to ensure everyone is included. It performs in both portrait and landscape mode and works in all video applications, including Facebook and TikTok, not just Facetime.

The new iPad 2021 is available to preorder now, and starts at £319 for the 64GB Wi-Fi only option, with the cellular data version bumping the price up to £439. Both versions come in Space Grey or Silver. Shipping will begin on 24th September.

The latest iPad mini was a bit of a surprise launch. The significant overhaul sees a redesigned enclosure and a change to the bezel help to increase the size of the Liquid Retina display from 7.9-inches in the previous interaction to 8.3-inches, all in the same footprint. The screen features True Tone, DCI-P3 wide colour support and 500 nits brightness.

Touch ID has been moved to the top of the frame and is now faster and more secure than ever, and a new stereo, landscape oriented speaker system gives the audio a boost.

Under the hood, the A15 Bionic chip makes an appearance and bestows up to a 40-percent CPU and 80-percent GPU performance boost over previous generations. The 6-core A15 Bionic also delivers 2x faster machine learning for speeding through tasks.

The front and rear cameras are both 12MP, with an Ultra Wide sensor on the front encompassing Centre Stage to keep everyone in frame as they move around, zooming in and out as subjects enter and leave. The Wide rear camera can take advantage of Smart HDR3 for higher quality images and the iPad mini can record in 4K for the first time.

Perhaps surprisingly, the Lighting port has been dropped in favour of USB-C, meaning the iPad mini 2021 can now connect to a much larger range of products as well as benefit from an increase in the speed of charging and file transfer.

There’s support for the second generation Apple Pencil along with a magnetic strip included for securing the pointer, a promised ‘all day’ battery life, and for the first time 5G has been added, alongside the latest Wi-Fi 6 standard.

The iPad mini (2021) is available to purchase right now at Apple's website where it comes in Purple, Pink, Starlight and Space Grey. It starts at £479 in the UK and is available in both Wi-Fi and cellular varieties. Shipping will commence on 24th September.

Apple also announced a new version of its wearable Apple Watch and introduced the Series 7 which brings the first design refresh since 2018. The resulting larger screen size means that the 41mm and 45mm sizes, both with bezels just 1.7mm thick, can now fit up to 50-percent more text on screen.

Moreover, the larger display means a full keyboard is now possible for texting and larger, more accessible buttons can be employed. The always-on display is 70-percent brighter when the wrist is down, so it’s easier to get a quick and clear glance.

Apple claims the larger screen of the Series 7 is crack resistant and also features a IP6X dust rating with a WR50 water resistance rating too.

The battery life remains at 18-hours but charging is 33-percent faster than on the Series 6 and a 45-minute charge will boost the battery from flat to 80-percent charged.

The Series 7 Watch comes in a number of colours including: Midnight, Starlight, Green, Blue and Product Red in aluminium; Silver, Graphite and Gold in stainless steel; and Natural and Space Black in titanium. It’s also compatible with existing bands.

With Watch iOS 8, cyclists are catered for with bike ride data recorded, fall detection and support for electronic bikes.

Apple Watch Series 2 launched
H
From the Forums: Apple Watch - Keep it or return it?