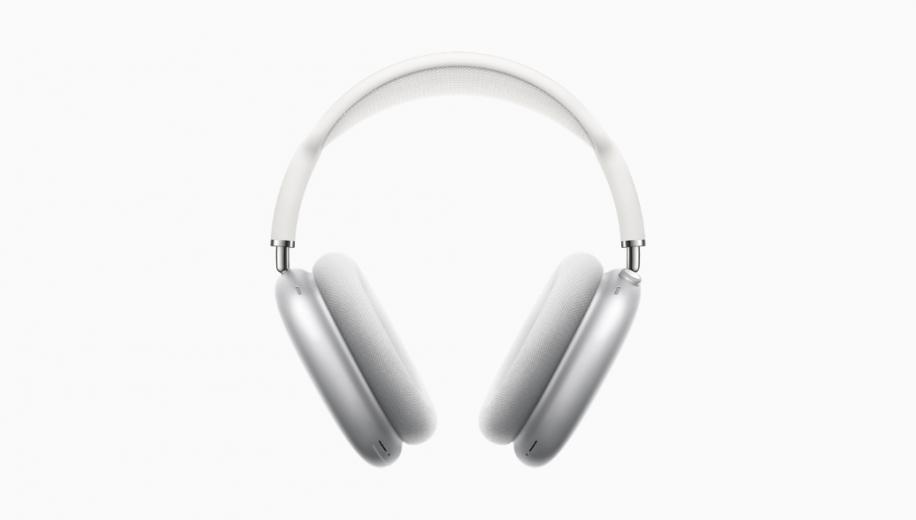 In a final seasonal bout of gift giving, Apple has rounded off a bounteous 2020 with the announcement of its anticipated all-new, wireless, over-ear headphone, which has undergone a last minute name switcheroo by dropping the expected ‘Studio’ addendum and instead revealed the name to be AirPods Max.

The headphones are available from 15th Dec and will be priced at $549.

Each aspect of the AirPods Max is designed with audio performance and comfort in mind. The knit mesh canopy, spanning the headband distributes weight to reduce on-head pressure and each earcup is attached to the headband via a mechanism that balances and distributes pressure to suit the wearer’s individual head shape. Acoustically engineered memory foam creates an effective seal on each ear cushion.

Each earcup has an H1 chip which uses 10 audio cores to perform 9 billion operations per second in order to provide the listening experience.

This experience is enhanced by a number of technologies including Adaptive EQ which monitors and adjusts the sound to the fit and seal of each earcup, while the four microphones embedded in each earcup combine to detect environmental noises before using noise cancellation to prevent it reaching the listener’s ear. The computational audio adjusts the noise cancellation to continuously adapt to the headphone fit and movement in real time.

Meanwhile, a single press of the noise control button switches between ANC and Transparency Mode, so wearers can still listen to music but also hear the ambient sounds around them if they have to interact with the real world.

Spatial audio is the means by which feedback from the AirPods Max and paired iPhone’s accelerometer and gyroscopes are used to calculate the correct positioning of content recorded in 5.1, 7.1, and Dolby Atmos so it stays anchored to the device, even as the user’s head moves.

Setup and connection to a user’s Apple devices and iCloud account is via a single tap and the Digital Crown, inspired by Apple Watch, offers precise volume control and the ability to play or pause audio, skip tracks, answer or end phone calls, and activate Siri.

The AirPods Max can automatically detect when they are on a user head and audio can be paused and restarted by lifting and replacing an earcup.

Battery life is quoted up to 20 hours with high-fidelity audio, talk time, or movie playback with Active Noise Cancellation and spatial audio enabled, and a slim Smart Case allows the AirPods Max to enter an ultralow power state that preserves charge.

Other features include automatic switching of audio between other Apple devices and Audio Sharing which makes it possible to easily share an audio stream between two sets of AirPods on iPhone, iPad, iPod touch, or Apple TV 4K - devices must be running  iOS / iPadOS / tvOS 14.3 or later, macOS Big Sur 11.1 or later and watchOS 7.2 or later.

The headphones are available from 15th Dec in the US and 25 other territories and will be priced at £549 / $549. Pre orders are being taken now.