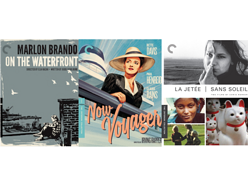 Win copies of Criterion's December Titles on Blu-ray
Competition Discussion
This competition has now ended. The lucky winners of this competition are displayed below.
The Criterion Collection and Sony Pictures Home Entertainment are delighted to add three new titles in December 2019 and we are giving YOU a chance to win a copy of each of them on Blu-ray™.

MARLON BRANDO (The Godfather) gives the performance of his career as the tough prizefighter-turnedlongshoreman Terry Malloy in this masterpiece of urban poetry, a raggedly emotional tale of individual failure and institutional corruption. On the Waterfront charts Terry’s deepening moral crisis as he must choose whether to remain loyal to the mob-connected union boss Johnny Friendly (12 Angry Men’s LEE J. COBB) and Johnny’s right-hand man, Terry’s brother, Charley (In the Heat of the Night’s ROD STEIGER), as the authorities close in on them. Driven by the vivid, naturalistic direction of ELIA KAZAN (Gentlemen’s Agreement) and savory, streetwise dialogue by BUDD SCHULBERG (A Face in the Crowd), On the Waterfront was an instant sensation, winning eight Oscars, including for best picture, director, actor, supporting actress (North by Northwest’s EVA MARIE SAINT), and screenplay.

Nervous spinster Charlotte Vale (All About Eve’s BETTE DAVIS) is stunted from growing up under the heel of her puritanical Boston Brahmin mother (My Fair Lady’s GLADYS COOPER), and remains convinced of her own unworthiness until a kindly psychiatrist (Notorious’s CLAUDE RAINS) gives her the confidence to venture out into the world on a South American cruise. Onboard, she finds her footing with the help of an unhappily married man (Casablanca’s PAUL HENREID). Their thwarted love affair may help Charlotte break free of her mother’s grip—but will she find fulfilment as well as independence? Made at the height of Davis’s reign as the queen of the women’s picture and bolstered by an Oscar-winning score by MAX STEINER (Gone with the Wind), Now, Voyager is a melodrama for the ages, both a rapturous Hollywood romance and a poignant saga of self-discovery.

One of the most influential, radical science-fiction films ever made and a mind-bending free-form travelogue: La Jetée and Sans Soleil couldn’t seem more different—but they’re the twin pillars of an unparalleled and uncompromising career in cinema. A filmmaker, poet, novelist, photographer, editor, and now videographer and digital multimedia artist, CHRIS MARKER (A Grin Without a Cat) has been challenging moviegoers, philosophers, and himself for years with his investigations of time, memory, and the rapid advancement of life on this planet. These two films—a tale of time travel told in still images and a journey to Africa and Japan — remain his best-loved and most widely seen.

This competition is open to all eligible AVForums members who are in the Active Member User Group or above, and who are subscribed to our newsletter. 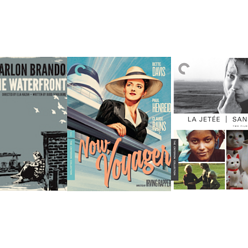