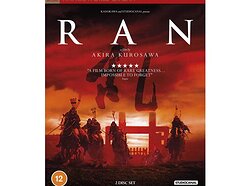 Win a copy of Studiocanal's Ran on Blu-ray
Competition Discussion
Sorry, but you are not eligible to enter this competition. You do not have the necessary permission to enter competitions.
You are a member of user group(s): Member - 0 - Unregistered / Unconfirmed.
The winner will be announced here after the closing date on Friday August 06, 2021.
VINTAGE WORLD CINEMA
STUDIOCANAL

​
STUDIOCANAL is proud to announce the release of a brand-new 4K version of Akira Kurosawa’s final masterpiece, RAN, 35 years on from its original release in the UK.

To celebrate the release, we are giving YOU the chance to win a copy on Blu-ray
​
This beautiful restoration will be available to own in stunning 4K for the very first time in the UK when it is released on UHD disc on July 19. This special three-disc edition comes complete with a host of extras material and is a great addition to the ever-expanding VINTAGE WORLD CINEMA collection. The film is also available to own on DVD and Blu-Ray.

The final masterpiece from legendary Japanese filmmaker Akira Kurosawa, RAN, which translates as ‘turmoil’, is Kurosawa’s meditation on Shakespeare’s King Lear crossed with the history of Japan’s 16th century Civil Wars and the legend of Morikawa, a feudal warlord with three sons.

Hidetora Ichimonji (Tatsuya Nakadai – Yojimbo, Kagemusha) an ageing warlord who, after spending his life consolidating his empire, decides to abdicate and divide his kingdom amongst his three sons, Taro (Akira Terao - Letter from the Mountain, Dreams), Jiro (Jinpachi Nezu – The Man in White, Red Shadow: Akakage) and Saburo (Daisuke Ryû - Tono monogatari, Gojo reisenki: Gojoe). When Hidetora’s youngest son Saburo voices concerns about the wisdom of his father’s plan, claiming that treachery within the family will be inevitable, Hidetora mistakes these comments for a threat and banishes him. This allows Taro and Jiro to take the reigns of power unopposed, leading to a brutal and bloody struggle to win absolute power.

Majestic in scope, RAN is a profound examination of the folly of war and the crumbling of one family under the weight of betrayal, greed and the insatiable thirst for power. 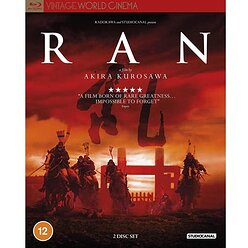