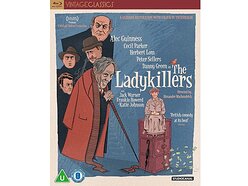 Win a copy of Studiocanal Vintage Classic The Ladykillers on Blu-ray
Competition Discussion
This competition has now ended. The lucky winners of this competition are displayed below.
StudioCanal
VINTAGECLASSICS

AVAILABLE NOW ON BLU-RAY
​
THE LADYKILLERS follows the hilarious capers of a group of small-time crooks, taking on more they can handle in the form of their sweet, but slightly dotty, elderly landlady Mrs Wilberforce (BAFTA Award-winning actress Katie Johnson; How To Murder A Rich Uncle). This group of seedy misfits are planning a security van robbery and rent a room from Mrs Wilberforce in her rickety Victorian house next to King’s Cross station from which to base their operation. To conceal their true purpose, they pose as a string quartet, though they cannot play a note and are in fact miming to a recording of Boccherini’s Minuet. The gang pull off the robbery but none of them could have predicted that their greatest obstacle to escaping with the loot would be their tiny hostess.

THE LADYKILLERS was BAFTA nominated for Best British Film and won Best British Screenplay for William Rose and Best British Actress for Katie Johnson, in the film that made her a star at the grand old age of 77! Alexander Mackendrick, along with Robert Hamer, was one of Ealing Studios’ greatest directors and THE LADYKILLERS and Hamer’s Kind Hearts & Coronets are two of the dark jewels in Ealing’s crown – films where the wonderful blackness of the plot is disguised by the farce that surrounds it. THE LADYKILLERS has inspired a Coen brothers remake and a very successful stage play and is always a fixture of Best Ever Comedies and Best British Films lists including The Guardian, Empire and Time Out (with the likes of Michel Gondry and Ben Wheatley placing THE LADYKILLERS in their all-time top 10).


​
The question for this competition is available to hear on our podcast live streamed on YouTube at 7pm BST on June 9th 2021. 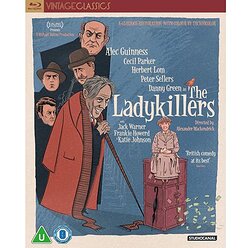