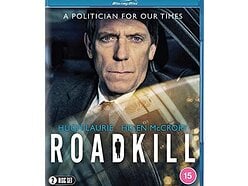 Win a copy of Roadkill Limited Series on Blu-ray

Win a copy of Roadkill Limited Series on Blu-ray
Competition Discussion
This competition has now ended. The lucky winners of this competition are displayed below.
Dazzler Media presents the acclaimed and powerful BBC political thriller Roadkill, starring Hugh Laurie, available to own on Blu-ray & DVD from 7th December.

The critically acclaimed Roadkill is a new four-part TV mini series following self-made, forceful and charismatic politician, Peter Laurence (Hugh Laurie, The Night Manager, House M.D). Peter’s public and private life seems to be falling apart - or rather is being picked apart by his enemies.

As the personal revelations spiral, he is shamelessly untroubled by guilt or remorse, expertly walking a high wire between glory and catastrophe as he seeks to further his own agenda, while others plot to bring him down. However, events show just how hard it is, for both an individual and a country, to leave the past behind. With enemies so close to home, can he ever outrun his own secrets to win the ultimate prize?

To celebrate the release we are giving YOU a chance to win a copy on 4K UHD! 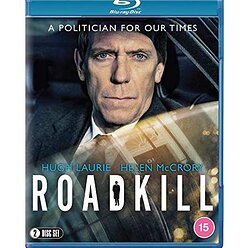