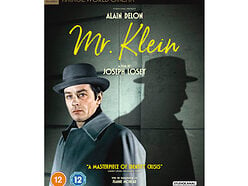 Win a copy of Mr. Klein on Blu-ray
Competition Discussion
Sorry, but you are not eligible to enter this competition. You do not have the necessary permission to enter competitions.
You are a member of user group(s): Member - 0 - Unregistered / Unconfirmed.
The winner will be announced here after the closing date on Thursday October 07, 2021.
STUDIOCANAL

CELEBRATING THE 45TH ANNIVERSARY OF THE CLASSIC THRILLER

ON DVD, BLU-RAY & DIGITAL FROM SEPTEMBER 13
​
STUDIOCANAL is proud to announce the release of a brand new 4K restoration of “master director” Joseph Losey’s (The Servant) classic, MR. KLEIN. Celebrating the 45th Anniversary of its theatrical release, the film will be available to own on Blu-Ray, DVD and on Digital from September 13.


To celebrate the release we are giving YOU the chance to win a copy on Blu-ray.​
Looking and sounding better than ever and accompanied by a host of extras material, this masterpiece of post-war French Cinema is a great addition to the ever-expanding VINTAGE WORLD CINEMA collection.

Both critically and publicly lauded on release, MR. KLEIN competed in the 1976 Cannes Film Festival, where it lost to Martin Scorsese’s Taxi Driver. The following year, however, the film would garner multiple César Awards; for best film, director, and production design. With its story of blurred identities within the politically charged atmosphere of German-occupied Paris, MR. KLEIN’s themes may well have been influenced by Losey’s own experiences of living in exile following his refusal to stand before the Un-American Activities Committee.

Starring Alain Delon (Le Cercle Rouge) in a career defining role with a special appearance from Jeanne Moreau (Jules et Jim). MR. KLEIN, Losey’s first French-language film with its Kafkaesque focus on the themes of identity and obsession, has become a classic of the doppelgänger paranoia genre and is one of Losey’s darkest films.

Paris, January 1942 - art dealer Robert Klein (Alain Delon) is making a killing. For this loyal Frenchman the Nazi occupation is a unique business opportunity. He stands to profit from the Jewish people’s misfortune, as they sell their possessions in a hurry to leave the country. But when a Jewish newspaper turns up on Klein's doorstep, his comfortable life begins to unravel. It seems there is another Robert Klein, a suspected Jewish Resistance fighter, who is content to live in the shadows and let his namesake take the fall. As Klein's investigation of his double progresses, the mood shifts from Hitchcock to Kafka and proving his innocence becomes less important than confronting his doppelgänger.

MR. KLEIN will be available to own on Blu-Ray, DVD and on Digital from September 13. 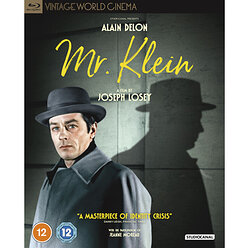