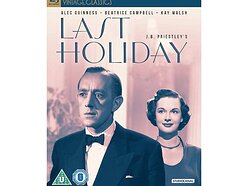 Win a copy of Last Holiday on Blu-ray

STUDIOCANAL is delighted to announce the release of a new restoration of the classic British comedy LAST HOLIDAY, directed by Henry Cass (The Glass Mountain) and written / co-produced by J.B. Priestley (An Inspector Calls).

Originally released in 1950 and starring the great Alec Guinness (Kind Hearts and Coronets, The Man in the White Suit), this witty and ironic meditation on the nature of love, life and luck will be available on DVD, Blu-Ray and Digital on March 9. Now looking better than ever and bundled with brand new bonus content, LAST HOLIDAY is a welcome addition to the Vintage Classics collection.

LAST HOLIDAY sees Guinness in one of his best roles as a middle-aged salesman. Coming just a year after his showy turn in full disguise as 8 different characters in KIND HEARTS AND CORONETS, this performance showcases instead Guinness’s skill for subtlety and nuance as an ordinary, unassuming everyman. Supporting him are an exemplarity cast of the era that includes performances from Beatrice Campbell (The Master of Ballantrae), Kay Walsh (Oliver Twist), Bernard Lee (Dr. No), Sid James (Carry On Doctor), Wilfred Hyde-White (The Third Man) and Jean Colin (The Mikado).

George Bird (Alec Guinness) is a mild-mannered salesman who has been told by his Doctor that he only has a short time left to live. Determined not to waste his final days, he decides to spend all his savings living life to the full at a hotel by the British seaside. Once there, George embarks on a winning streak at croquet, poker and the horses that attracts the attention of his fellow guests, curious about the wealthy mystery man in their midst. George, however, feels more at home with the maids and clerks, including the no-nonsense housekeeper Mrs. Poole (Kay Walsh).

Written and produced by renowned novelist, playwright and left-wing broadcaster J.B. Priestley, LAST HOLIDAY is a deceptively sharp class commentary full of ironic and witty observations on the nature of life, love and luck. 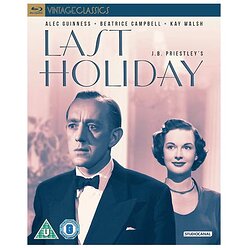