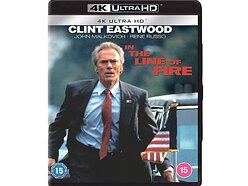 Win a copy of In the Line of Fire on 4K Ultra HD Blu-ray
Competition Discussion
This competition has now ended. The lucky winners of this competition are displayed below.
SONY
PICTURES
HOME
ENTERTAINMENT

IN THE LINE OF FIRE​

Clint Eastwood stars in the universally acclaimed IN THE LINE OF FIRE, available for the first time on 4K Ultra HD on June 14 courtesy of Sony Pictures Home Entertainment.


To celebrate the release we are giving YOU the chance to win a copy on 4K Ultra HD.​
Clint Eastwood stars as Frank Horrigan, a veteran Secret Service agent haunted by his failure to protect John F. Kennedy from assassination. Thirty years later, he gets a chance to redeem himself when a brilliant psychopath threatens to kill the current president and take Horrigan with him. Taunting him by phone and tantalizing him with clues, the assassin lures Horrigan into an electrifying battle of wits and will that only one man can survive.


Read the Official AVF Review: In the Line of Fire 4K Review 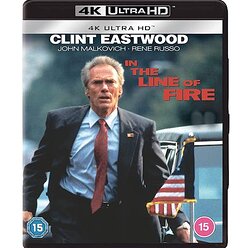